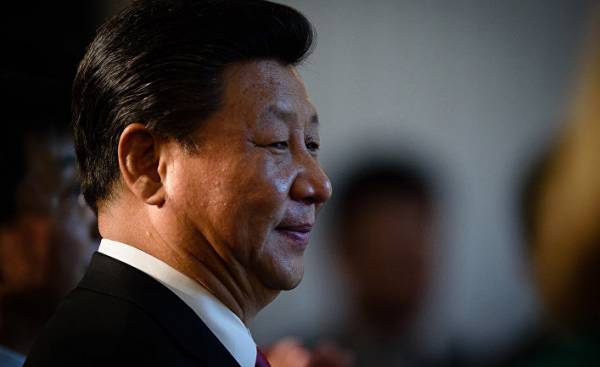 15 may Beijing hosted the first international economic forum on “One belt and one road”. This event gathered in the capital of China more than 100 countries, including heads of state and government, including Russian President Vladimir Putin. The forum was dedicated to the announced in autumn 2013, the initiative to create “Economic belt of the silk road” (silk road economic belt) and the “Maritime silk road of XXI century” (MSHP-XXI), which subsequently received the abbreviated name of the “One belt and one road”. We present to your attention the key points of the speeches of Chinese President XI Jinping made at the opening of the forum.

XI Jinping started his speech with an appeal to history. Two thousand years ago the ancient silk road opened a new page in the history of mankind. The spirit of the Great silk road is the most valuable heritage of human civilization. It contains concepts such as peace and cooperation, openness and inclusiveness, mutual learning, mutual benefit and win universal. XI Jinping is not accidental mentions this, as the concept of “One belt, one road” took over the heritage of the Great silk road, and it is based on all of the above principles. XI Jinping stressed that history is the best teacher.

Turning to the present, XI Jinping lists the positive changes that have occurred in the world lately, and says that despite it all, humanity is facing serious challenges, and he thinks about it.

Since the announcement of the concept of “One belt and one road” (the “Belt and road), it took almost 4 years. During this time, more than 100 States and international organizations expressed support for the program and began to participate in the construction of “Belt and road”.It is mentioned that the content of the concept included resolution of the General Assembly and the UN security Council.

At the moment the project implementation is gradually moving to action. XI Jinping presented the main results achieved during the four years of work in five key areas of cooperation, the so-called “five connections”: political coordination, the relationship of infrastructures, unhindered trade, free movement of capital and the strengthening of ties between peoples.

In the political sphere have managed to reconcile with such countries as Russia (connection to the EEU), Kazakhstan (communication with Kazakhstan’s program “shining path”) and also with ASEAN members, Turkey (the project “Central corridor”), Mongolia (the program “development Path”), Vietnam (project “Two corridors, One circle”), UK (strategiia “Northern Powerhouse”), Poland (“Amber road”) and so on. Also set work to pair with Laos, Cambodia, Myanmar and Hungary. China signed a cooperation agreement with more than 40 countries and international organizations, more than 30 countries enhanced cooperation in the field of production capacity.

For four years we have managed to accelerate the promotion of such infrastructural projects like high speed rail in Indonesia, the railway China-Laos railway to Addis Ababa (Ethiopia)-Djibouti railway in Budapest(Hungary) Berg(Serbia). At the moment, formed the economic corridor China-Pakistan, China-Mongolia-Russia, the New Eurasian continental bridge and the entire infrastructure network of roads, ports and pipelines.

To facilitate trade and investment has also achieved notable results. XI Jinping noted that the time of customs clearance for agricultural products to Kazakhstan and other Central Asian countries declined by 90%. From 2014 to 2016, the volume of trade between China and countries “along the way” has exceeded 3 trillion dollars. China’s investment in countries “along the way” exceeded $ 50 billion. Chinese enterprises have built more than 20 countries 56 economic cooperation zones, and created in these countries, 180 thousand jobs.

In the financial sector, XI Jinping paid attention to so-called “bottleneck”. To eliminate it deployed diverse forms of financial cooperation. The Asian infrastructure investment Bank has provided a loan for the nine projects in the framework of the “Belt and road” in the amount of $ 1.7 billion. The investments of the silk road Fund has reached $ 4 billion. China and 16 countries of Central and Eastern Europe established a joint financial holding company in the format of “16+1”.

In the framework of the fifth “link” is an active cooperation in various humanitarian fields: the science, education, culture, health. XI Jinping mentioned that every year China provides countries “along the way” 10 thousand government scholarships.

In his speech, XI Jinping tried to imagine what China sees “Belt and road”. First, it is the way of the world. In other words, the country “along the path” should respect the sovereign rights, territorial integrity and development path, social system and vital interests of each other. Between countries should be a dialogue, not confrontation; partnerships, not alliances.

Secondly, it is the path to prosperity. Development is a universal key to solving all problems. For General development you must first deepen cooperation in the field of industrial development. Finance also is the economic “blood” of the financial circulation should be unimpeded. Interconnected infrastructure is the basis of development cooperation.

Thirdly, this is the way of openness. Openness brings progress, and the closeness brings backwardness. Therefore, XI Jinping stressed that China intends to create an open collaboration platform, to protect and promote an open world economy, to jointly create an environment conducive to open development environment. While trade is an important engine of economic growth. It is therefore essential to protect the multilateral trading system, facilitate trade and investment. China intends to conduct an open, inclusive, balanced, win-win economic globalization.

Fourth, innovative way. Therefore, in the process of creating the “Belt and Road” will use such innovations as the digital economy, artificial intelligence, nanotechnology, quantum computers, etc. Will be implemented a new idea of “green” development, by 2030 it is planned to achieve the objectives of inclusive, sustainable development.

Fifth, it is a cultural way. In other words, between the two countries “along the way” will actively strengthen intercultural exchange.

In his speech, XI Jinping emphasizes peaceful intentions of China. He talked about wanting China on the basis of the five principles of peaceful coexistence to develop friendship and cooperation with the countries “along the way”, to share with the world experience of development, but in any case not to interfere in the internal Affairs of another country.

China will increase financial support for the construction of the “Belt and road”. The silk road Fund Will be submitted another 100 billion yuan. It will promote the holding of funds overseas operations in RMB. According to preliminary calculation, their volume is equal to about 300 billion yuan. The state development Bank and China Import-export Bank of China have provided targeted loans in RMB in the amount of 250 and 130 billion yuan, respectively, for projects under the “Belt and road”.

China carries out cooperation with Asian infrastructure investment Bank, the New BRICS development Bank and the world Bank. Together with these structures defined the guidelines for the funding of “Belt and road”. With many countries China has signed agreements on business cooperation in various fields.

China seeks to enhance innovative cooperation and to run the plan of scientific and technological innovation “Belt and road”. Over the next five years the country plans to host for short-term scientific activity of young scientists of 2500, 5000 to prepare scientific and technical personnel and Supervisory staff to run 50 joint laboratories.

In the next three years China will provide countries and the international organizations involved in creating the “Belt and road”, financial assistance in the amount of 60 billion yuan and build more facilities that will improve the lives of the population. Developing countries “along the way” will be provided emergency food aid worth 2 billion yuan.

In conclusion, XI Jinping led the Chinese, Arab and European Proverbs, common sense which says that any large business is the result of long and hard work. The construction of the “Belt and road” is also a great thing that requires careful execution. He called on all countries to join together and step by step move towards the results that bring happiness to peoples throughout the world.