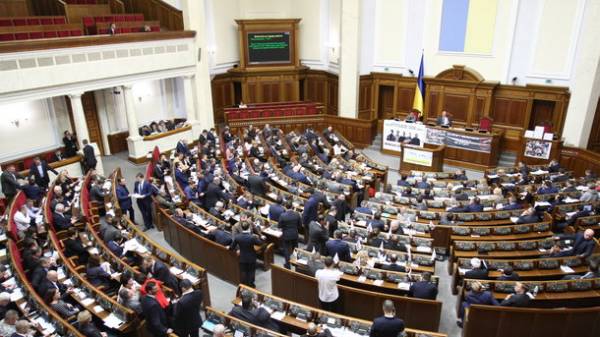 After a month of respite MPs today will return to the plenary hall. Ahead of them two weeks of work. “Today” figured out what he wants in the near future to deal with Parliament and what the forecast was given by experts.

PLANS HAPPY. The speaker of Parliament Andriy Parubiy said: some of the questions that need to be considered, left from past plenary meetings. “The first unit is offered on a Tuesday — housing. We nearestmetro him last time, and it is proposed to start work,” he said. One of the rules in the agenda suggests that a penalty in 85 UAH will be imposed for unauthorized use for personal gain not only electricity, but also drinking water (e.g., pouring this water garden)
. Furthermore, the right to make administrative reports on such violations are available to staff of NERC. In this Thursday, according to Parubiy, Parliament will consider documents on agrarian policy, as well as issues of culture and spirituality.

In turn, the leaders of the two largest parliamentary factions, Arthur Gerasimov (PPB) and Maxim Bourbaki (people’s front), at yesterday’s conciliation meeting, insisted that first and foremost needs to be passed a bill providing the right to higher education of Ukrainians who live in the temporarily occupied territories. So, for them, stands for 1 thousand budgetary places in high schools of Zaporizhzhya, Mykolaiv, Odesa and Kherson regions. Recruitment will be carried out in the competition of diplomas of secondary education. In this case specifically for these students will provide in-depth study of the Ukrainian language.

“The issue of pension reform to be discussed publicly by consensus with the involvement of trade unions, employers, different political forces, hired workers”, — said in his turn, the leader of the radical Oleg Lyashko. He demanded a public discussion of lifting the moratorium on land sales.

RECORDS AND PENSIONS. Experts in their assessments of the work of the Parliament in the next plenary week went. So, political analyst Volodymyr Fesenko said that this week will be reporting.

“Annual report to Parliament can represent the government, and the attorney General,” he says, ” but I can definitely say that don’t expect this week and maybe next, too, consideration of some key reform bills. I mean pension and land reform — for him there is no willingness from the government, and negotiations with the International monetary Fund are still going on”. According to Fesenko, one of the main intrigue of the week — the deprivation of Ukrainian citizenship non-faction people’s Deputy Andriy Artemenko, but to predict the development of events, the scientist did not dare. We will remind that the President of Ukraine signed a decree on deprivation of citizenship Artemenko in late April. The reason for this was a voluntary acquisition Artemenko in 2005, the citizenship of Canada.

But politekspert Vadim Karasev believes that in the coming two weeks the pension reform will be voted exactly: “the Parliament will find a compromise and definitely will vote before the summer and the next two weeks will be “pensionsreformen”. She’s tied up under the cooperation with the IMF, whose representatives are today expected to arrive in Ukraine. Will also be a partial solution on health reform, but this work will proceed in a routine way. But land reform in this session it just will not accept it will be the final decision in the autumn”.

In Parliament, the fifty hard-core of people’s deputies-truants

The Committee of voters of Ukraine has estimated that since the first of January 90% of the votes in BP 51 missed MP. Only this year there were 42 plenary and 1312 votes. The four parliamentarians during this time do not vote even once. Among them Evgeny Bakulin (“Opposition bloc”), Mr. Denis dzenzerskyy (people’s front) and Sergey Klyuev and Alexander Onishchenko, who is wanted by Ukrainian law enforcement authorities. According to the head of the CVU Alexey Purse, among the deputies who regularly skip classes, — the representative of “Samopomich” semen Semenchenko (58 votes) and independent Andrew Biletsky (67) and Vladimir Parasyuk (80). “A paradoxical situation. Despite the boycott of parliamentary work, a lot of these MPs spend dozens of hours to live” — sums up the Purse.