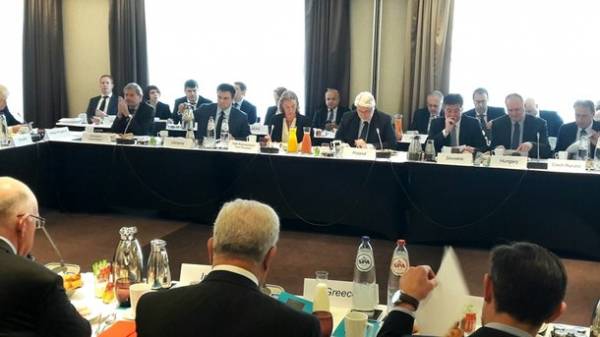 The Minister of foreign Affairs of Ukraine Pavlo Klimkin in Brussels took part in the meeting “Ukraine + Group of friends of Ukraine in the EU”, where he spoke about the worsening situation in the Donbass, reported on the progress of Ukraine in the reform process and urged the foreign Ministers of the EU to extend sanctions against Russia.

As reported Monday evening, the press service of the Ukrainian foreign Ministry, the meeting “Ukraine + Group of friends of Ukraine in the EU” was held may 15 with the participation of the EU high representative for foreign Affairs and security policy Federica Mogherini, the EU Commissioner on the issues of European politicians of the neighbourhood and negotiations on expansion Johannes Khan, and the foreign Ministers of member States of the EU. The meeting was organized at the initiative of the Minister of foreign Affairs of Poland Witold Waszczykowski.

During the meeting, Klimkin informed the EU side about the worsening situation in the Donbass continue active shelling of the Ukrainian positions by Russia and supported militants, including the bombing of the car of the OSCE Monitoring mission and the deaths of civilians in Avdiivka.

“The foreign Minister of Ukraine called on the foreign Ministers of the EU to the continuation and strengthening of sanctions as an effective means of pressure on Russia with the goal of full implementation of the Minsk agreements. The Minister stressed the need to expand the sanctions list of persons involved in the illegal seizure of Ukrainian enterprises in the occupied territories”, – stated in the message.

In his speech, Klimkin reported on the progress made by Ukraine in the context of the reforms, including in the fight against corruption, activities of established anti-corruption institutions, reform of the judicial system.

“The Minister welcomed the approval by the EU Council of the legislative proposal on the abolition of visas for citizens of Ukraine, which ended with final approval of visa-free regime between Ukraine and the EU”, – noted in the Ministry of foreign Affairs of Ukraine.

During the meeting the parties paid special attention to preparations for the forthcoming summit Ukraine-the EU and the Eastern partnership summit.