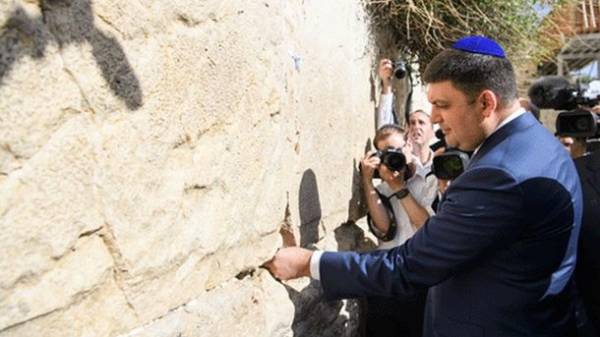 Prime Minister Vladimir Groisman, along with other members of the Ukrainian delegation visited the Wailing Wall in Jerusalem, where he had left a note asking for peace in Ukraine

About it reports a press-service of the Cabinet of Ministers.

According to the report, Volodymyr Groysman, and the Ministers who accompany him on a trip to Israel, other members of the official delegation, visited the Wailing Wall in Jerusalem.

“The Prime Minister left in the Wall a note that asked for “calm and peace for Ukraine and the well-being and prosperity to the Ukrainian people, and also thanked God for the support of Ukraine in times of trial”, – noted in the Cabinet.

The Prime Minister also visited the new archaeological excavations near the Walls and with the tour descended into the dungeon. Ukrainian tourists and other visitors to the Museum, representatives of religious organizations and businessmen who were in the Museum, were photographed with members of the Ukrainian delegation.

Prime Minister of Ukraine noted that Ukraine and Israel should do more to coordinate their actions in the international arena.