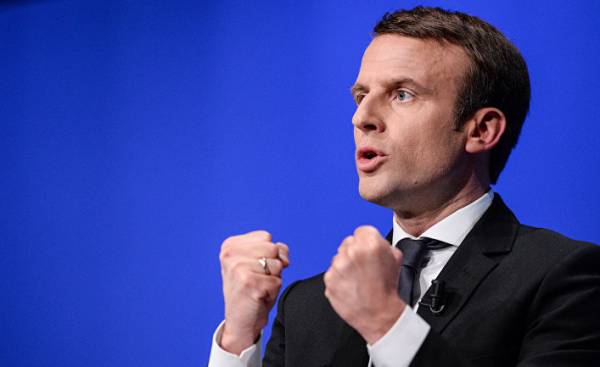 Frankfurt — When Emmanuel macron won the presidential elections in France, many Germans sighed with deep relief. Pro-European centrist convincingly won from the far-right populist marine Le Pen of the National front. But to nationalist threat in Europe was indeed eliminated, Germany will have to work along with a Macron over the solution of the economic problems that prompted so many voters to act against the European Union.

It will not be easy. Moreover, already after a couple of days after the election, the key points of the economic program of Macron began to be criticized in Germany. First and foremost, with significant critical attitude was met by his proposed governance reforms in the Eurozone.

In their election Manifesto Makron came up with the idea of increasing the level of federalism in the Eurozone, which implies the emergence of a common budget for the provision of public goods in the Euro countries. This budget should be managed by the Minister of Finance and economy of the Eurozone, and supervision — to exercise the Parliament of the Eurozone. Macron also called for better coordination of tax regimes and border control, strengthening the protection of the integrity of the internal market and against the backdrop of growing threat of protectionism in the United States — to introduce policies for the procurement of goods and services “made in Europe”.

The attempt to start a discussion on the issue of European bonds and partial socialization (mutualization) obligations of the state of the Eurozone countries were perceived as utopian outburst in the heat of the election campaign. By the way, in the platform of the Macron of these proposals is nowhere. Much more German experts and politicians concerned about the desire of the Makron that Germany sent its budgetary resources to increase domestic demand and, thereby, reduce its huge surplus on the current account.

This is not a new idea. With them often was made by the representatives of the European Commission and the International monetary Fund, the predecessors of the Macron, and economists of many countries of Europe. Equally predictable, the German government rejects them, based on the arguments, and counterarguments, constantly repeated.

Most German economists and officials believe that economic policy should focus almost exclusively on the promotion of production and market supply, dealing with the diagnosis and solution of structural problems. The German officials regularly claim that the economy is approaching the limits of their capabilities determined by the supply capacity.

Moreover, the German government does not consider the surplus of the current account as a political issue, and sees it as a manifestation of the fundamental competitiveness of German companies. This is a positive result of responsible behaviour of trade unions, which allow companies to retain the necessary flexibility in wages.

The accumulation of external assets is a logical consequence of this surplus, not to mention the fact that for an aging society such behavior is imperative. German politicians consider it essential to reduce the debt to GDP ratio to 60% set by the European rules. And when else if not in good times, a chance to make savings?

This position is not quite consistent with the economic program of the Macron. It not only contains important proposals to solve existing problems on production and market supply in the French economy, but also supported the idea of stabilization of output and, more importantly, increased spending in such areas as public infrastructure, digitalisation, clean energy, aiming to boost potential growth.

Despite the convincing victory of the Macron, it would be an uphill battle for the implementation of its economic plan. Even if the National Assembly which will be elected in June, will support his reform program, the resistance of the streets will be no less fierce than in the previous few years.

In Germany, however, there is a compelling reason to support the economic reform Rules concerning market supply and demand. The fact that France and Germany are deeply interconnected, and this means that Germany is extremely interested in the fate of the Macron.

Yes, the German government can not (fortunately) to focus on fine tuning the level of salaries, but it can — at least for purely selfish reasons — to guarantee their future, increased investment in human and social capital, including educational institutions (from kindergartens to universities) and infrastructure (roads, bridges, broadband Internet access).

This approach would reduce the cost of capital for the private sector, thus making private investment more attractive. In addition, there would be a real domestic assets, reducing Germany’s dependence on foreign credit risks. The decrease in the surplus on the current account would also mean improving the stability of the position of Germany’s partners in terms of their net financial liabilities.

If Germany and the Makron will not find a common language, the costs for both sides will be enormous. There is no evil external force that imposes Europe populism. It arises organically and fueled by a real and growing dissatisfaction. This dissatisfaction is not solely economic, however, the geography of populism coincides with the geography of economic problems in the EU: the situation of too many Europeans deteriorated for too long. And if the Makron will not be able to fulfill their promises, then skeptics like Le Pen may well win the next election in France.

To avoid this outcome, the Macron should be harder than his predecessors to carry out a difficult but — ultimately — helpful policy. He could take lessons from former German Chancellor Gerhard Schroeder. In 2003, Serdar has made it a priority to reform, and not strict compliance with the stability Pact and growth of the EU. Additional fiscal freedom was needed to mitigate the adaptation of the economy to the radical reforms in the labour market which was conducted by Schroeder. The decision to focus on reform rather than persistent adherence to the rules, in the end proved to be correct.

Now the moment of policy in the style of Schroeder came to Macron. He also seems to prefer sensible pragmatism, not blind adherence to strict rules (which in any circumstances is meaningless). Fortunately, political principles are not set in stone, even in Germany. Remember how the German government adamantly rejected the idea of creating a banking Union in the Euro area and the European stability mechanism, but in the end they were created (though there are those who believe that it was done too little too late).

Europe is going through a seismic shift: its political system was undermined from within (and she becomes vulnerable to Russian pressure). Fear of “the other” and against international trade as a zero-sum game has become increasingly common. In such circumstances, resolute and consistent action not only from France but also from Germany, which, ultimately, may lose the most.