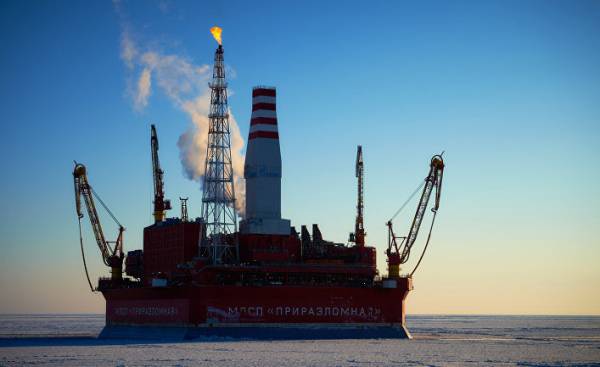 Export diversification, open economy, fair competition and fair political regime. Economists said that is not enough in Russia to cope with the challenge of oil dependence.

That prevents Russia “get off the oil needle,” said experts at the conference of the Russian Economic Challenge in the school of management “SKOLKOVO”.

The Russian authorities are going the wrong way, declaring the purpose of getting rid of oil dependency, said at the conference, the Director of the Economic policy program of the Carnegie Moscow center Andrei Movchan.

What the regime is doing wrong?

Movchan with his colleagues from Carnegie center studied the experiences of different countries, which suffer from oil dependence.

Russia belongs to the group of countries with medium volume of oil produced per capita. It is much less than that of Norway or the United Arab Emirates, but more than, for example, from Mexico. It is this group of countries in a greater degree have oil dependence, experts say.

According to Movchan, Russia, Iran, Venezuela, Kazakhstan and other countries were approximately in the same oil trap. They did not have enough oil resources to make the entire population of the rich. But there is no incentive for active reform, they replace the oil.

“They are not rich enough to use simple techniques such as Norway or the United Arab Emirates and feel good, said at the conference Movchan. And not poor enough that they were required to use complex methods to feel good again”.

The methods that the Russian government chose to fight the oil addiction, not the most effective, says economist.

First, the concept of import substitution, in his opinion, is not too effective. Any country that tried to replace the imports in the detriment of exports, have not achieved success, said Movchan. He cited the example of Norway, which in the 1960-ies relied on import substitution, but quickly rejected it and focused on export diversification.

“Norway became Norway, it ceased to be a fishing village, which has produced [only] energy resources”, — said Movchan.

Secondly, the Russian economy should become more open. The more open the economy, the better it feels and the easier it is to get rid of oil dependency, the economist continued. It is necessary to reduce the risks to the business. This applies, for example, protection of property rights.

The experience of other countries, according to Movchan, shows that successful reforms are usually conducted with the participation of qualified foreign experts. Reforms only the “internal school”, usually not too successful, the study by Carnegie.

“This contradicts the notion that foreigners will harm, not help. It turns out that foreigners help, and private officials often do harm in this situation”, — explained the man.

But the growth of public expenditure usually does not help to combat dependence on oil. According to Movchan, government spending “are usually not there” that fosters corruption.

Bad rid of the dependence of the country where resources are monopolized, that is, the oil is produced by a limited number of manufacturers. These countries are experiencing crises worse, as manufacturers can exert pressure on the government, said the economist.

Action against corruption, he was assessed as ineffective. Corruption, according to him, is a consequence of the availability of resources and inefficiency in the economy. As soon as the country begins to apply a specific set of measures related to openness of the economy, the level of corruption falls.

The elites do not want reforms

Russia and other countries caught in the oil trap connects and another factor — the political regime. Usually in countries, faced with severe dependence on oil, authorities are forced to fight for their preservation, because it doesn’t feel legitimate and able to control the situation in the country, the researchers said.

The authorities should be ready to unpopular decisions. “Combating the resource curse arises as the patient is almost dead when he needed to revive. The struggle must begin with intensive care, and it is always reform, but the reform is taking big risks,” said Movchan.

Agreed senior researcher, laboratory for studies in economic sociology Higher school of Economics (HSE) Grigory Yudin. According to him, the main victim of the resource curse becomes a democracy. In such a society usually high inequality and elite separated from the rest of the population.

But the incentives for reforms there. Elite get a windfall, they focus on the “global lifestyle”, continued his thought Yudin. The state is simply not interested in diversification, as the emergence of new players threatens the elite, the expert said.

Yudin expects changes from “below” — people tired of inequality. Resentment in Russia quietly, but builds up, he said.

Head of the analytical center “Forum” Ekaterina Malofeeva noted that some changes in the Russian economy occur. People with available funds, ready to invest in a business that meets their values. What Movchan said, it is a very narrow stratum of people.

Oil is now not that

Chief economist of BP for Russia and CIS Vladimir Drebentsov said that global economy is already changing the way energy. He compared this transition to how humanity has moved from searching for food in the nature to agriculture.

He recalled that oil production in the U.S. is growing, and its cost has plummeted in recent years. If 2014 was thought that shale oil is one of the most expensive source of raw materials, it has now become clear that the price of its production may be lower. And countries, OPEC is losing influence in the oil market.

Rector of the school of management “SKOLKOVO”, Marat Atnashev, in its ocerall, recalled that before the shortage, or even the threat of shortage of oil led to a rapid adjustment of prices upwards. Now the situation has changed.

According to Atnashev changing and the demand for oil, which was formerly no alternative fuel for cars. But now there are alternatives.

For Russia, the question is how elites will react to an external shock in the event of a sharp fall in oil prices. In conversation with the Russian service Bi-bi-si Yudin from the HSE suggested that the victims will be ordinary citizens. He cited the example of the exchange of food, which suffered from the fall of the ruble. At some point there was a consensus that they have taken loans themselves will be responsible, reminded the expert.