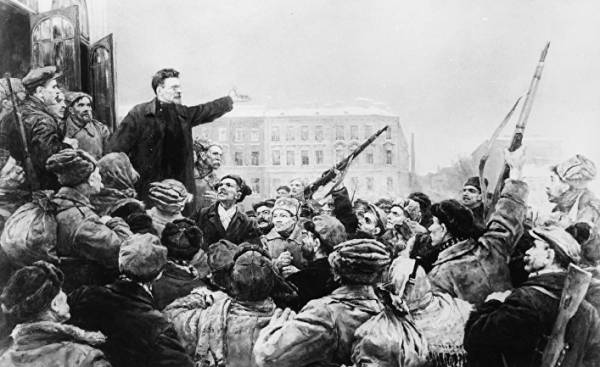 The article was published in the newspaper the New York Times NYT 18 Mar 1917.

The war paved the way for the Russian revolution, because it persuaded the army to the people, says Mrs. Miriam Finn Scott, the wife of Leroy Scott (Leroy Scott (1875-1929) was an American writer, screenwriter — approx. TRANS.). Mrs. Scott, a native of Russia, has long lived in the country and maintained close ties with the revolutionary movement. She was a witness to the uprising brewing in Russia. In addition, the heavy hand of the former regime has affected her family — a brother was imprisoned for revolutionary activities.

“The current revolution is one of the most significant events in history,” exclaimed yesterday, Ms. Scott, when asked to tell about Russia. “Now we and all who felt the approach of the revolution, I want to cry: “We told you so!” When Europe’s war began, we believed that it would give revolutionaries an opportunity to implement its programme. However, few took our words seriously, many objected: “This is impossible. Russian people are dying.” But we knew better. We know that our people are not dead, — at the first opportunity he would live. And the people alive.”

“For a revolution were to appear such conditions, as it is now, because the masses still could not resort to the help of the army. As long as the army consisted of the military class, which served the rulers of the country, she spoke out against the people harassing him in every way. However, with the beginning of the war, army ranks began to fill with people from the common people, who brought with them the revolutionary spirit. And they distributed it among the soldiers. In addition, under the Royal government the unprecedented suffering endured by the soldiers. They soon realized that the authorities they are waiting for nothing. The only hope they put on the Duma. They have a revolutionary spirit — and the revolution was now inevitable.”

“Currently, however, Americans should understand that Russia will not suddenly become perfect. The revolutionary spirit in Russia many shades, among the revolutionary forces there are many factions, but all of them have teamed up in order to lay the first stone needed to advance in the direction of reform, for the overthrow of the Tsar and his family. But once that is done — as soon as the first decisive step — the time will come to deal with the change. Perhaps that time will come after the war, but it will come. And then it will manifest itself, the divisions among the revolutionaries. The current revolution can cause other revolutions: without a doubt, we will see the discontent among the reformers, and partly of the chaos that can reign for a long time — twenty-five and fifty years. Geographical conditions, typical for Russia, inadequate rail infrastructure, lack of schools, illiteracy — all these and many other factors will only increase confusion”.

“But make no mistake, Russia is able triumphantly to pass through the transition period, because the Russian people have all the necessary qualities. Compared to other Nations, the Russians have the greatest spiritual and social wealth. Yes, they have a high level of illiteracy, but not ignorance — it is the same. Those who cannot read and write, inspired by life experience and high purpose.”

“In America, there are only rare glimpses of true spirituality, like a Russian. Some authors partly able to shed some light on this question, but in America no one even could not even dream of the great wealth possessed by the Russian people. Russia already has great achievements in the arts — painting, poetry, prose and music, but this country has much more powerful potential.”