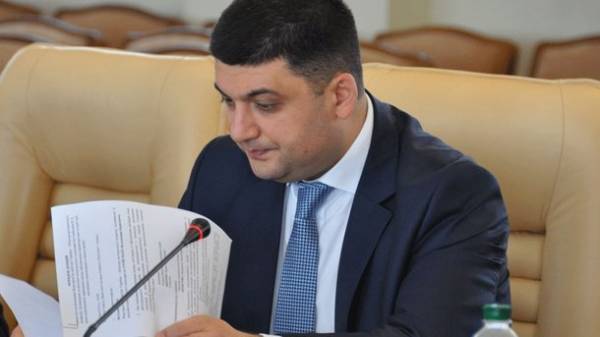 Prime Minister of Ukraine Vladimir Groisman instructed the state property Fund (SPF) of Ukraine and the Ministry of justice of Ukraine to take exhaustive measures for the protection of property of PJSC “Odessa port plant”.

“A government Directive: the SPF to take comprehensive measures to protect the interests of the state. Please, if necessary, change the plant management immediately. Lawyers immediately. The Ministry of justice and the same Commission to take all necessary measures for the protection of state property,” – said Groisman at the meeting of the Cabinet of Ministers in Kiev, on Thursday, may 11.

“To conduct the inspection concerning possible misconduct on the part of officials as IPF, and SPF, accompanying this case. I want to remind you, when the decision of the Stockholm arbitration (on the debt of the SCR before Ostchem – Ed.) appeared, the government gave the order to immediately appeal the decision… the decision was not appealed, even by the procedures defined by the rules of the Stockholm arbitration”, – said Petrenko.

Groisman supported this initiative of the head of the Ministry of justice.

“The treatment I will receive today at the NAB, I think they will be interested in this – almost $ 300 million, as it happens. In addition, I will apply to the Prosecutor General that he is under personal control took the case”, – concluded the Prime Minister.

Earlier, Prime Minister of Ukraine Volodymyr Groysman accused the leadership of the HMO and lawyers serving the company in participating in the conspiracy of a deliberate loss of court.

We will remind, after two unsuccessful attempts of privatization of AES in 2016 the company due to high natural gas prices and accumulated debts for his deliveries were stopped for the first two months of 2017.

Later the company sent notification of the SCR on reducing the feed gas pressure to the plant on the morning of 29 March from-for debts of the HMO for the services of a balancing in the amount of 434 million UAH.

The Pechersky district court of Kiev definition from 28 Mar temporarily banned PJSC “Ukrtransgaz” restrict or suspend the transportation of gas to the SCR.

HMO, state-owned, produces chemicals, and is also engaged in handling ammonia by sea.

Recall that the IPF is finished in 2016 with a loss of almost 3 billion UAH. Note that in 2015 the plant has closed the annual accounts with a net profit of more than UAH 200 million.

As the largest domestic producer of ammonia, the plant can not normally work during the year. HMO around constantly erupting scandals and lawsuits, while its privatization was postponed twice already.

The international monetary Fund (IMF) advises to complete the sale process of the company until the end of the year.

As you know, an active participant of the scandals of the Odessa port plant was the former Odessa Governor Mikhail Saakashvili.