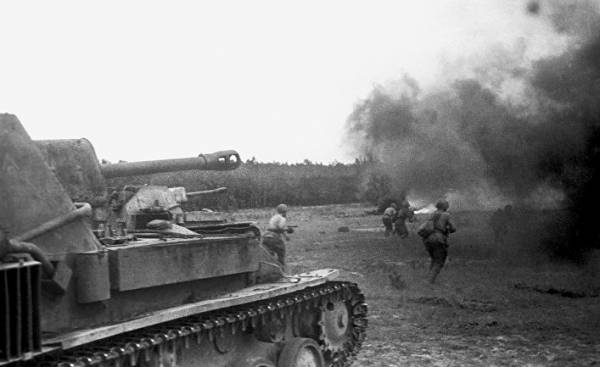 In September 1939, a difference of ten days, two fascist States, Nazi Germany and the USSR started world war II with the partition of Poland, the seizure of the Baltic States. All in accordance with the fraternal accords and the victory of the German wishes to the brotherly people and the great Soviet.

In both countries, at the helm was a dictatorial, aggressive regimes. Both countries had plans of world domination — the sauces were different, a dish that is cooked red-brown all around, there was one. In the USSR and in the occupied lands, destroyed the people along class lines, in Germany, racial. Horseradish radish is not sweeter. Jews and poles that burned in the ovens of the death camps, the brothers of the Ukrainian and Volga peasants, zamerenim artificial hunger, organized by the Bolshevik criminals. There were millions. Why waste your time?

And then the spiders clung to each other in the throat.

On 22 June 1941, the organizers of the Holocaust, attacked the organizers of the Holodomor. Could be the opposite, but Hitler got there first. This day is the day of the tragedy of the Soviet peoples. The day when the criminal regime is thrown into the burrs, they started world war millions of our fellow citizens. Incompetent politicians, cruel rulers, worthless generals burned their own organized fire millions of lives of ordinary people.

This victory got to our grandfathers and great-grandfathers at a terrible price. And it was a victory the Gulag of Auschwitz. One evil to defeat another evil. Moreover, on both sides were killed and ordinary people who dreamed of world domination, and wanted to live, work, raise children and grandchildren. Dictatorships do not care about the lives of their citizens — women and Frau still give birth.

This is both true and false at the same time. Kiev was bombed — that’s it. But the war began much earlier. She was already in. Just joint parade was over. And wishes glorious victories of the German arms was very helpful. I often say that the fault of the British who committed the Munich betrayal. I agree. And they agree that it was a diplomatic mistake. I often nod that the poles participated in the section of the Czech Republic. Yes, it is… And paid for it in full.

And the Germans had long repented of his actions. None of them said, “Can you repeat that”. This must not happen again. Need to know the truth. You need to tell the truth. 22 June 1941 — is not the date of the beginning of the war. This is the date of the attack on the USSR, its main ally in Europe — Nazi Germany.