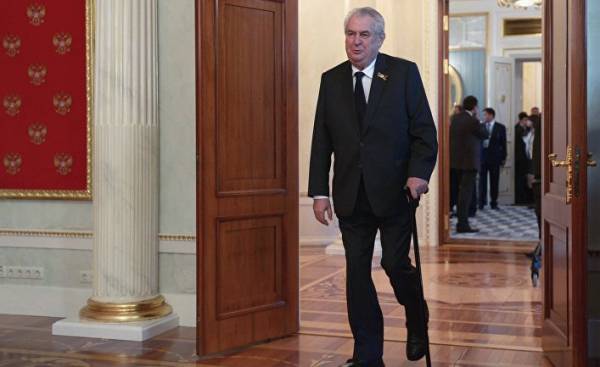 I don’t remember exactly when we recorded an interview with Joseph Sharkoy. Definitely, it was a few years ago. This is supported by the fact that during our hour-long conversation, he asked mainly about politics, Clerka affected Russian policy and asked the question: why, actually, I’m closely watching her since 2011.

Then the majority of people do not understand what can be the total of the two at first glance different countries, as the Russian Federation and the Czech Republic. Now the actions of some Czech politicians led many to the conclusion that some connection still exists.

I told Josef that I watch for Russia for two reasons. First, this country could never cope with the internal problems only as attacking and threatening other countries. Secondly, I actually was convinced that Russia is a big laboratory in which the experience of methods, some of which with the help of certain politicians and others way are transferred to the Czech soil. In other words, forewarned is forearmed.

The observation of these parallel processes eventually bore fruit and contributed to the understanding of what is happening in the Czech Republic events. If you are constantly before my eyes the example of how the President of the Republic imitates the style of behavior of Vladimir Putin, you are able to understand not only the spiritual impulses but also the political actions of the head of their own country, which is equal to Putin’s model.

Because in modern Russia is incredibly to some, the Prime Minister admitted the idea can become an independent player and to pursue an independent policy against the ideas of the head of state, that is, with what should not be questioned, but to be in fact a Royal privilege. Someone who is already familiar with Russian tendencies, and, moreover, knows the mentality of Milos Zeman, does not surprise the Comedy, all of which Zeman gave the premiere in Prague castle.

Milos Zeman is not Vladimir Putin

However, the reality discovered one very important difference. At Prague castle, the events unfolded not as it would be in the Kremlin. And the reasons are two.

First, Milos Zeman — not Vladimir Putin. I mean not only the difference in political systems of Russia and the Czech Republic: we are still a parliamentary democracy, and the role of the head of state is fundamentally different and much less significant than in Russia.

Putin maintains good physical and mental shape, although about his changing appearance and disappearance from public life for a few days there is a lot of speculation. In this sense, the case of Zeman, much worse, and the condition affects actions more frequently. A few years ago it was impossible to imagine that Zeman had an attack of anger that made him go against all the rules of decent behavior, proper to the President, and pointedly to leave, not waiting to hear the speech of the Prime Minister.

Secondly, there was a strong personality who without hesitation came out openly against such behavior, although it provoked a conflict with the President of the Republic. This man is Prime Minister Bohuslav Sobotka.

Zeman is not going to back down from his opinion and wants to delay the removal of the Minister of Finance Andrew Babish, contradicting the Constitution. Russian laboratory had already suggested this option.