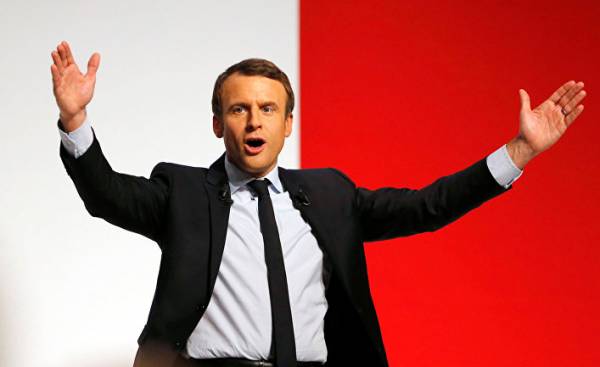 The Kremlin calls the new French President “to overcome mutual distrust and join forces for ensuring international stability and security.” Some Russian analysts, who obviously had no appeal to lose benevolently minded toward Moscow françois Fillon and marine Le Pen, were less diplomatic. In addition, certain influential forces in the environment of the President of Russia, which created the conditions for the invitation to the Kremlin, marine Le Pen, and now must repent for their decisions, As do many Anglo-Saxon journalists, they thought that France was not different speakers for Pexit England and chose to trump America. The first important lesson for Moscow and the rest: the West is not a unified whole, and France — not just a copy of the Anglo-Saxon world, especially politically. In any case, the ruling circles in Russia now have a lot to rethink.

We have previously noted that Russia made a mistake by opposing the Emmanuel Macron. The fact that he is not the ideologist of “Atlanticism” as was represented by some (in Moscow and in far-right circles), but a realist who understands the importance of Russia in the international arena. In other words, the reconciliation under President Makron possible.

Anyway, understanding the Paris-Moscow there is one mandatory prerequisite: it is necessary to reject the logic of the cold war, in which some close to the government of the Russian patriots as well as the number of Americans who regard the world as a confrontation of camps. For the Kremlin, this means that he should stop seeing the West as hostile to him education. The perception of Europe as almost indistinguishable from NATO and the United States geopolitical rivals is simply not true. Washington and Moscow can compete in geopolitics, but this does not necessarily affect the relations of Europe and Russia: EU is the peace Union of States without plans to expand in the foreseeable future…

This precondition follows the logic of common sense, which meets the interests of Russia and other key international players: a prosperous and strong Europe is an interesting trading partner and a significant geopolitical player, which promotes economic globalization and international stability. China has understood that: unlike-minded anti-Western Russian nationalists he prefers a peaceful multipolar world the logic of confrontation in the spirit of the cold war, when the victory of one implies the destruction of another… is in Russia’s interest to follow the example of China, both in economy and in geopolitics.

A more rational approach to the EU could open the way for selective cooperation, which is the more likely and necessary that Russia and France/EU could agree on a number of foreign policy issues. First and foremost, it is worth noting four themes in which Paris and Moscow could agree in the coming months, if they had the political will for that:

— Opposition to the administration trump if she is overly aggressive. The military logic of the President of the United States makes one fear the worst in the international arena, which can quickly become unstable (the situation in Korea or the middle East). In Russia, apparently, with nostalgia about the axis Paris-Berlin-Moscow, which was formed in response to the war in Iraq in 2003. Emmanuel macron was not afraid to criticize the antics of trump and, apparently, opposed to traditional us support for Saudi Arabia against Iran (the trump reiterated her). In contrast to the predecessor, the Makron prefers neutrality, the opportunity for dialogue with Riyadh and Tehran to maximise the protection of French interests. Paris won’t be on Washington and, like Berlin, will not take destabilizing the Middle East and Asia. Thus, if Russia accepts the above mentioned condition on a number of issues it is possible to recover the axis Paris-Berlin-Moscow.

— The fight against “Islamic state” (banned in Russia as a terrorist organization — approx.ed.) and international jihadism in General. For a candidate of the Makron he was the main enemy in Syria and beyond. France became the target of jihadism, and the new President should pursue a tough anti-terrorism policy. In this issue, Moscow and Paris could find (albeit limited) space for arrangement.

— Serious work for peace between Armenia and Azerbaijan. As noted earlier, France has the necessary diplomatic capital for serious peace process between the two countries, but without Russia, of course, nothing will come of it. Moscow tried to extract short-term gain from the frozen conflict that is dangerous “warming up” for a while. A new war over Nagorno-Karabakh turned out to be the greatest problem. France and Russia could agree on the important for the region issue. In addition, the peace process would be a contribution to strengthening the relations of our two countries.

— Support for the peace process in Afghanistan. It seems that the background of the current unstable situation in the country, the Americans have no other solution than the military, which over the past 15 years have proven to be ineffective. Russia teamed up with China and the two key countries of the region (Iran and Pakistan) and offers a real diplomatic alternative. It could stabilize Afghanistan and create the conditions for an effective fight against ISIS in the region. This meets the national interests of France. In any case, much more than the persistent instability that fueled American militarism.

Russia and France do not are doomed to eternal confrontation. Although they do not have agreement on all issues, on a range of substantive topics, their interests coincide. Let’s hope that Paris and Berlin will understand and act accordingly.