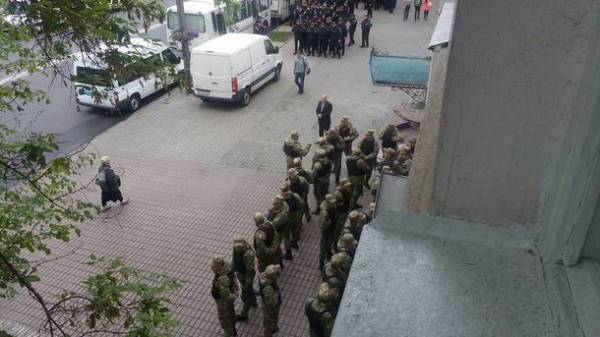 The chief of the National police of Ukraine in Kyiv Andriy kryschenko reported that militiamen detained 24 people at the address: the street, 6-a. At this address is the office of the organization “Volunteer movement of the OUN”.

“Detained 24 people. We did not identify. 24 people in the office on Park street, 6-a”, – he said to journalists on Tuesday in Kiev.

He said that another man was detained in the Arsenal area before the beginning of the March that tried to deploy a banner with the symbols in the style of the St. George ribbon.

Asked by reporters if the activists of weapons, Krishchenko said, “No, the arms were not withdrawn”.

He noted that the detention in the office on the street Mazepa, 6-a began after acts of hooliganism (smoke bombs) and for committing a resistance to militiamen, when one policeman was injured. According to him, these articles openly criminal proceedings. These 24 people were taken to the Pechersk rayupravleniya police, are held urgent investigative actions.

According to Krishchenko, information on victims is specified, but significant injury nobody got. “Currently appeals to medical institutions or to the police there,” he said.

Krishchenko also reported that the police along with the activists seized the St. George ribbon in the elderly participants, and 82-year-old woman launched a red flag.

As is known, in Kiev today are events on the occasion of the celebration of victory Day was not without fights. When the column of participants of the action “Nobody is forgotten, nothing is forgotten” came to the monument of Glory, they were met by representatives of the OUN and other nationalist movements.