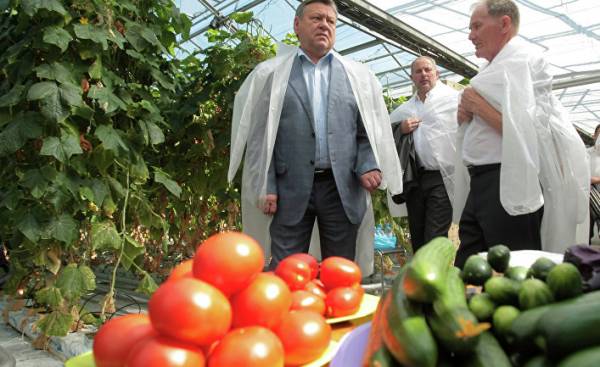 The reduction in the number of Russian tourists has affected the foreign exchange earnings of the country.

Prior to the embargo, we exported 350 thousand tons of tomatoes per year. The annual income from these exports was equal to 195 million dollars.

Well, if the embargo on the supply of tomatoes will be charged. If not, if the ban continues, our producers and exporters a little upset, but our losses of revenues from exports do not break neither producers nor exporters. These losses foreign exchange earnings will not undermine the economy.

Tomatoes do not go to the top of the economic agenda.

It was generally recognized that tomatoes are the cause of inflation. Do not end the talk about that on the plantations of the tomatoes are three Kurush (coin of Turkey, equal to one hundredth of a Turkish Lira — approx. lane), and in the store — five Kurush.

We began to believe that when Russia is not buying tomatoes, the producers are shattered, export revenues fall significantly.

For the production of tomatoes is influenced by seasonal conditions. Producers complain about the low price on the plantations, and consumers — at a high price in the shop.

In total exports of fresh vegetables and fruits, as well as the income from these exports, the weight of the tomatoes that go to Russia, not so great to undermine the economy.

In an average year, we export 3.5 million tons of fresh vegetables and fruits. From this we get the export income of $ 2.5 billion.

For the year produced about 12 million tons of tomatoes. Half of this amount is tomatoes, which throughout the year are grown in greenhouses and are consumed mostly in fresh form.

The remaining eight million tons of tomatoes are largely consumed fresh within the country.

In 2015 it’s been exported to 543 thousand tons of fresh tomatoes. In 2016 due to Russian embargo the total export of tomatoes fell to 480 thousand tons.

The income derived from the export of tomatoes to various countries has decreased from 297 million to $ 238 million.

Repeat that until the sanctions to 2015 year, we exported 350 thousand tons of tomatoes in Russia and received income in the amount of $ 195 million.

That’s how much we lose if will never be able to sell tomatoes to Russia.

The tomato sector in Turkey does not collapse if it can’t sell its products in Russia. Income from exports will not be much reduction due to the fact that Russia is not buying tomatoes.

Manufacturer Grow Fide of Antalya Hasan ünal (Hasan Ünal) have brought bad news. In January and March of this year due to cold weather fertilization of greenhouse tomatoes was low. And until then, until the field tomatoes, prices will rise because of the greenhouse production can not meet demand.

Talk about tomatoes, of course, will continue… Do for our people, the tomatoes have really become an indispensable product? And that’s why our people is in search of cheap tomatoes for the past 12 months?