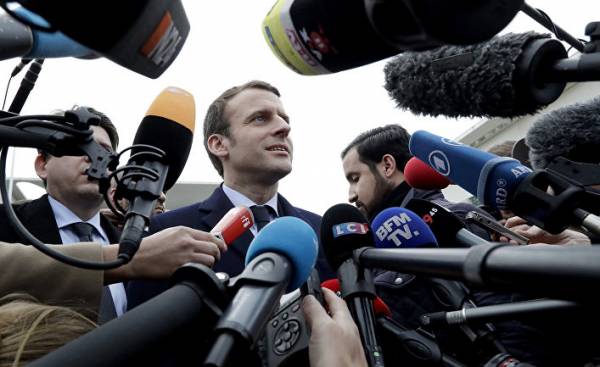 Emmanuel macron was able to gain one of the most spectacular political victories in French history: 39-year-old macron, who had never before held elected office, has managed to come first in the presidential election in the absence of support from any major party.

But it is possible that this phase will be the most simple to the former Minister of economy, claiming that he was “neither left nor right”.

After France celebrates his victory, and on may 14 will be held the inauguration ceremony, Mr. Macron — as he himself predicted last week — “not a honeymoon”.

What will be its first steps?

To choose the Prime Minister and Cabinet

At the moment we know that he has already chosen the Prime Minister, but he has not yet called his name.

In the list of possible candidates for this post included the names of the representatives of the right and left wing and centrists.

As for the right wing, that experts have called the name Philip Edward (Edouard Philippe), the center-right mayor of Le Havre, associated with a moderately conservative former Prime Minister Alain Juppe (Alain Juppé).

Other center-right candidate is the 52-year-old Xavier Bertrand (Xavier Bertrand), one of the leaders of the party Union for a popular movement.

However, advisers Macron warned him that it is not necessary to appoint as Prime Minister the person who can quickly become his rival, is also vying for the presidency.

Another likely candidate is françois Bayrou (François Bayrou), Chairman of the centrist Union for French democracy and a former candidate for President who supported from the very beginning of the Macron. However, many right-wingers dislike him, so the choice is Bayrou may deprive him of a substantial share of the support.

As for the left, among them experts allocate Gerard Colomba (Gérard Collomb), socialist, the influential mayor of Lyon, and a loyal supporter of the Macron, and Jean-Yves Le Drian (Jean-Yves Le Drian), who was defense Minister in the government of President Francois Hollande.

To obtain the majority of seats in Parliament

Despite the victory in the presidential election, Mr. macron might be virtually powerless, if it is a young political movement “Forward!” will not be able to obtain a majority of seats in Parliament in the elections of 11 and 18 June. French voters have traditionally been the “Legitimists”, turning the victory on presidential election victory in the battle for seats in Parliament.

But the movement Mr. Macron has no experience of fighting for the championship in each of the 577 parliamentary constituencies, which in fact are their micro-choices.

Candidates from the two largest parties — the socialists and center-right Republicans — went the distance in the presidential race in the first round, and their movements are weak and fragmented. However, it is unclear whether Mr. macron to curry favor with influential figures on both sides, especially if they have to leave their party and serve under his banners.

According to a survey from Sofres-Onepoint published on Monday, may 8, in the parliamentary elections, the movement “Forward!” may get 24-26% of the vote, beating center-right (22%) and “national front” (21-22%). Ultra-leftist party of Jean-Luc Mélenchon (Jean-Luc Mélenchon) “Rebellious France” will score about 13-15%. But 69% of the French believe that Mr. macron might not get a majority of seats in Parliament.

To set the right tone for the presidency

The outgoing President Francois Hollande promised to be “a normal President”, but in the end was the most unpopular President in French history with a rating of just 3%. His predecessor was accused that he discredited the presidential post for his sharp and Hyper-presidential demeanor. Mr. macron wants to take a more elevated manner, to become “the President who holds the rotating presidency”, maintaining “a government that is ruled”.

He will focus on long-term goals for economic growth, taxation, pension system, education, security and transparency policy, authorizing the government to engage in daily governance of the country.

From Mr. Macron will be able to enhance his presidential credibility at the upcoming NATO summit, which will take place on may 25 and which will be attended by Donald trump, and the group of seven summit on may 26-27. His first trip as President could be the trip to Mali, where French soldiers are fighting with the Islamists.

Mr. macron has promised to start his term by passing a law that will allow clear French policy, given the fact that the election campaign has turned into a mudslinging fight, and the level of skepticism by the French to their politicians has reached record levels.

Mr. macron has promised to sign this summer a number of decrees — that is, to circumvent the Parliament to “simplify” the French labor laws, allowing negotiations on the issue of working hours at the company level and setting the upper limit of severance pay. This may cause the anger of the unions and provoke a large-scale street protests.

When françois Hollande was inaugurated as President, he promised to renegotiate the European fiscal Pact and to convince Germany of the need for austerity measures. He couldn’t do it. It is possible, Mr. Macron will be able to achieve some success in negotiations with Angela Merkel.

He wants to make a “five-year road map to ensure the Eurozone real budget and to enlist the support of 27 European countries in such matters as environmental protection, industry and migration.” He wants to achieve the creation of a European border forces consisting of 5 thousand people.

Mr. macron will be meeting with Ms. Merkel shortly after his inauguration.

Mr. macron has promised to lift the state of emergency imposed in France after a series of terrorist attacks. His term expires in July. By the summer, Mr. macron wants to establish a permanent headquarters operations, internal security, intelligence and the fight against terrorism, as well as a special unit that will deal with ISIS (a terrorist organization banned in Russia — approx. ed.)