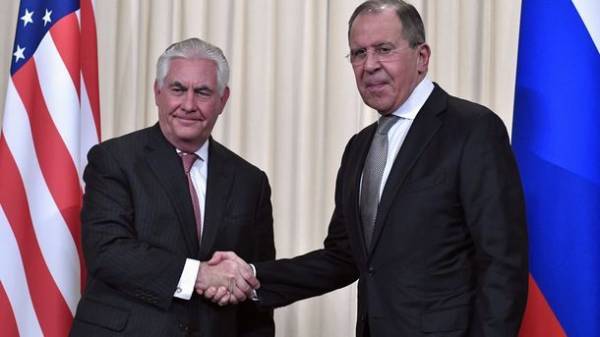 The Minister of foreign Affairs of Russia Sergey Lavrov will meet with Secretary of state Rex Tillerson in Washington on Wednesday to discuss the conflicts in Ukraine and Syria. This is stated in the message of the US state Department, TV channel “112 Ukraine”.

In particular, Tillerson and Lavrov will discuss “the need to stop the violence in the East of Ukraine and resolve the conflict through the full implementation” of the Minsk agreements.

The Ministry of foreign Affairs of Russia has confirmed Lavrov’s visit to USA and his meeting with Tillerson, but the theme of the meeting explained in detail: message from Moscow, the foreign Ministers are going to “exchange views on defining international issues and topical issues of bilateral relations.”

Note that the may 8-10 in Washington will be a visit by the Minister of foreign Affairs of Ukraine Pavlo Klimkin.

As reported last week, Tillerson said that relations between the US and Russia almost no confidence. This is the situation in Ukraine, as well as issues of arms control, he called those industries in the settlement of which Russia, according to him, today is not too good.