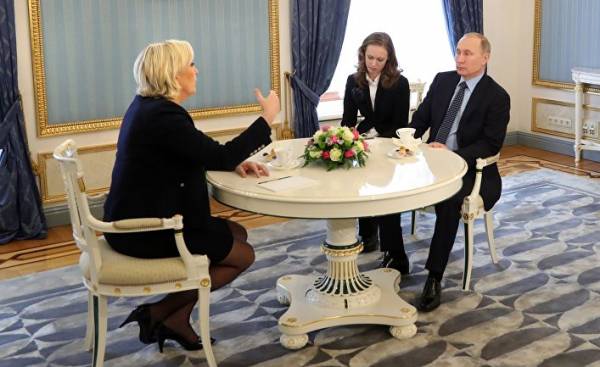 Just a few hours before fierce presidential debate in France, which took place on Wednesday, may 3, trolls and bots on Twitter began to spread baseless allegations that the candidate from the centrist Emmanuel macron of a secret offshore Bank account.

The campaign headquarters of Mr. Macron immediately accused his far-right opponent, marine Le Pen (Marine Le Pen) that patronize it the master of the dark online-magic — the representatives of the Kremlin of Vladimir Putin, who previously has accused of meddling in the presidential election in the United States. Mr. Putin has repeatedly said that Russia has not interfered in the elections in any country.

On the eve of the last round of voting, which will take place in France on Sunday, there has been a lot of speculation about the impact of Mr. Putin. During the debate on Wednesday, Mr. macron has accused Ms. Le Pen is that it “obeys the dictates of Mr. Putin.”

Over the last few years the Russian leader and far-right politician, who shared a similar nationalist views, developed close ties. These relationships were underpinned by complex financial schemes and exclusively positive coverage of Ms. Le Pen in the Russian state media.

The Russian leader, the victory of Ms. Le Pen will provide an opportunity to sow discord in the West. And support Mr. Putin’s policies have helped the French to imagine themselves as a global leader.

“We are closely watching all the attempts of foreign States to influence the course of these elections, said a senior official of the French intelligence service. — It is obvious that in these elections Russia like Le Pen”.

Allies of Ms. Le Pen’s “National front” in Moscow argued that its relationship with Russia and the support that she gets from there, reflect the natural closeness with the Kremlin and are not manifestations of a systematic and organized covert subversive campaign. “We have similar views on the world,” says Bernard Ducal de La Roscher (Bertrand Dutheil de La Rochère), strategist of the party “national front”.

These relationships become so close that Ms. Le Pen has met with Mr. Putin during his visit to Moscow in March. Given the fact that the list of other foreign allies of the “National front” includes only far-right party, many perceived this meeting as a really successful turn in the career of the French politician.

Its relationship with the Russian leader date back to 2011, when she took the party leadership from her father Jean-Marie. To do this, the “National front” was an informal Alliance with the far-right leader Vladimir Zhirinovsky. In the context of efforts to “detoxify” his party, Ms. Le Pen has sought to build relationships with the more centrist United Russia of Putin.

This relationship was largely limited to periodic visits until 2014, when Le Pen supported the annexation of Crimea by Russia.

“Mr. Putin is a patriot,” she said, supporting Russia’s claims to Crimea, and urging the West to lift sanctions against Russia. At the same time, the front national, constantly needing the money, because French banks refused to give him credit because of the risk to reputation, received a loan in the amount of 9.4 million euros from the Moscow “First Czech-Russian Bank”.

Were leaked text messages exchanged between Russian officials testified that the decision to grant credit was an expression of gratitude to the Kremlin for its support. She Ms. Le Pen has called such suggestions “outrageous and offensive”.

The fate of the credit remains unclear since last year, when the Russian Central Bank closed “First Czech-Russian Bank”, referring to a fictitious account and a hole in the balance sheet in the amount of 26.5 billion rubles. The Prosecutor’s office opened a criminal case after the Central Bank accused the leadership of using a temporary moratorium, which is usually introduced by the Russian regulators with respect to troubled lenders.

Roman Popov — owner of the Bank and former Manager of Stroytransgaz, a company owned by a close friend of Mr. Putin-Gennady Timchenko did not respond to a request for interview. He was not charged with any crime. During the period of moratorium, the Bank sold the loan to the National front, almost bankrupt company car hire Konti, about which almost nothing is known.

We have not received any response by the legal address of the company “Konti”, which was in an old tenement building on the outskirts of Moscow. In addition to the “Conti” in this apartment was still 977 various companies.

One of the tenants told the FT that in this apartment lives a young family with a daughter-a schoolgirl. Representatives of the National front, argued that the party lists and will continue to list the interest on the loan like a Deposit account until the, until the arbitration proceedings on the loan. Meanwhile, the party continues to apply for loans in other, more obscure Russian banks, as reported by the French website Mediapart.

However, many Russians are hoping for the victory of Ms. Le Pen in Sunday’s election. According to a survey conducted by the state VTSIOM organization, it was supported by 61% of respondents, and not against it — only 8%. This is largely due to the activities of Ms. Le Pen is illuminated on Russian state television. Journalists praise its willingness to strengthen ties with Moscow, depicting Mr. Macron as a puppet “of the demons of globalization” seeking to create a unified world government”.

From the perspective of the Russian envoy Konstantin Malofeev, against whom the West imposed sanctions in connection with its role in the Ukrainian war, the relationship between Mrs. Le Pen and Mr. Putin indicate the attractiveness of Putin’s concept of resistance to Western liberalism.

“Russia, in fact, raised the banner of France or Spain held in the Middle ages, the banner of defender of the faith, he said. — That’s why conservative forces from all countries turn to Russia”.