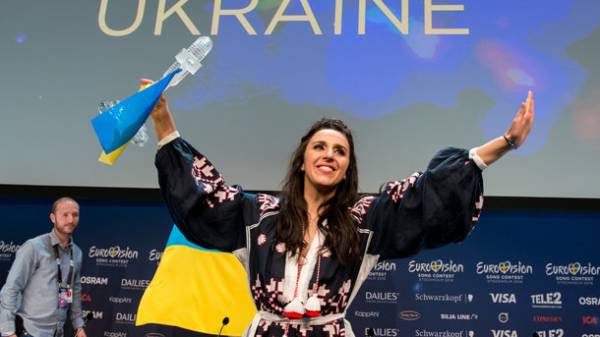 In Kiev the seventh of may will take place the opening ceremony of the Eurovision-2017. For several days in the centre of the Ukrainian capital works fan zone on Sunday and block the roads. The website “Today” has collected the main information about the international competition, which is to know the residents of the capital.

What roads will block

The first event in the framework of the Eurovision song contest will take place this Sunday, the seventh of may. The opening ceremony will be held in the exhibition complex “Park.” On the same day, foreign delegations will walk the red carpet from the Mariinsky Palace. By the way, the organization has spent 2.49 million hryvnia – so many have paid to Ukrainian TV presenter Andriy Dzhedzhula, which is responsible for the Red carpet and the opening ceremony.

By the way, also with the fourth on may 14 in the center of Kiev there is the fan zone, which restricted the movement of pedestrians on the street Khreshchatyk (from the street Bohdan Khmelnytsky to the street the lower part of the sidewalk on the odd side of Khreshchatyk street) and the street (Pushkinskaya str to str).

Read more about when and what roads will be closed in the capital because of Eurovision, you can read a map Today.

During the Eurovision song contest in Kiev has three main locations: the arena of the contest, international fair centre, the fan zone in the city centre and Euroclub in the exhibition center “Parkovy”. Open access only one of the locations for the fan zone here on the four screens will broadcast the semifinals and finals of the competition. Citizens who are unable to buy tickets to international Convention and exhibition centre, which will host the competition, will be able to join the celebration in the fan zone.

At the time, have parties for the foreign delegations, there is also a press area, accessible to foreign and Ukrainian journalists. Eurovision Club will run from the first on 14 may. Here, hold private parties for members of delegations of the participating countries, including the rehearsals and performances of the contestants. To get to the Euroclub will also accredited fans and media representatives”, – reported the official website of the Eurovision song contest. 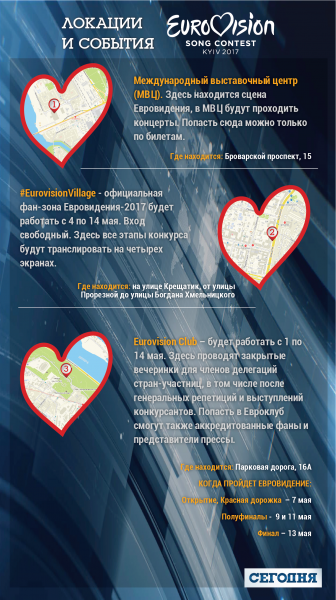 A few weeks ago sold out the last batch of tickets for the Eurovision final. The cost has varied from 1499 to 15999 USD. In this latest addition to the box office sold out within hours, organizers said the contest in Ukraine.

Now on sale are tickets for both semifinals to be held on 9 and 11 may, as well as all General rehearsals of the semifinals: night and day. However, several days ago, the organizing Committee decided to radically reduce the price of the first semi-final. If earlier the price of the tickets ranged from 499 to 9999 hryvnia, now all tickets, except the VIP-sector, can be bought for 499 USD.

The Eurovision song contest in Ukraine will cost 665,7 million hryvnia, the press service of the Ukrainian broadcaster of the competition, channel NTU. It is noteworthy that Austria contest two years ago spent $ 42 million (1.1 billion UAH on the current exchange rate).

By the way, during the Eurovision song contest-2017 will perform on stage of the Ukrainian performers. Just for the musicians ‘ fees spent several million. So, Jamala’s performance at the Eurovision song contest is the National public broadcasting company of Ukraine 986 thousand UAH, and Ruslan will get 394 thousand hryvnias. During the final competition will be held the premiere of the song of the winner of last year’s song contest – “I Believe in U”. Jamal will perform a song from the show “Golos Krainy”.

On his page in the social network producer Jamala Igor Tarnopolsky explained: drawings, costumes and other expenses before the show cost a lot of money. “During Eurovision Jamal will perform three numbers, each of them will be drawn graphics of the Ukrainian artists, one of them staged dance Ukrainian Director and executed domestic dancers. Recorded an incredible version of the Symphony by Ukrainian composer and played by a terrific orchestra with a beautiful Ukrainian musicians. Also Jamal will be in dresses by the best Ukrainian designers. Sorry that this is not interesting news, their names are announced only in this release. “The main thing” you already know how much it all cost,” wrote Tarnopolsky.

By the way, on the costumes of the leading Eurovision Volodymyr Ostapchuk, Alexander skichko and Timur Miroshnichenko singled 894 thousand UAH. The lion’s share of this amount (over 600 thousand) will go to Kiev workshop on sewing of suits “Indposhiv”. In this work, one of the leading Alexander Sichko, the organizers have estimated in 190 thousand hryvnia. Press Secretary Eurovision will pay 186 thousand hryvnias.