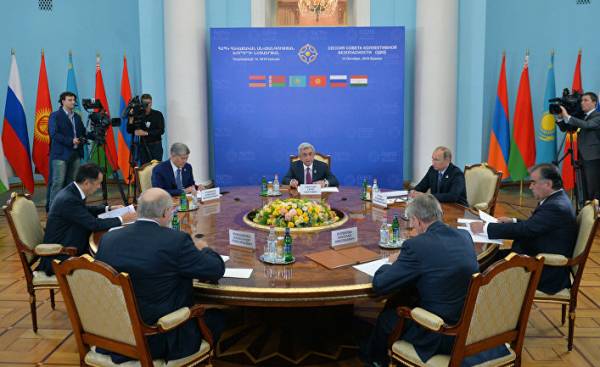 By decision of the President of Armenia Serzh Sargsyan at the session was dismissed from the post of Secretary of the national security Council and took on the position of the CSTO Secretary General. The Secretary-General of the CSTO has always been the representative of the Russian Federation, and for the first time on the rotation principle a representative of another country, the CSTO is assigned to this position. What significance this may have for the organization and for Armenia?

About this newspaper “Hayots Ashkhar” interviewed the Director of the Armenian branch of CIS Institute Alexander Markarov.

Alexander Markarov: After Nikolay Bordyuzha, Yes, for the first time, on the appointment of the representative of Armenia, in alphabetical order, the chairmanship in the CSTO passed to Armenia. Rotation is a common principle which operates in various international organizations.

Of course, its application will be useful to the organization. CSTO Secretary General reflects the face of organization, but the daily work is carried out not through the “mind”, “hands”, “muscles” of the Secretary-General and the efforts of the entire apparatus of the organization.

The CSTO as a collective security organization that has a bureaucratic system that deals with day-to-day activities of the organization, and it follows from those basic documents which the heads of member countries of the CSTO. It documents the strategic values, which define activity structure and its prospects for a period.

“Hayots Ashkhar”: Often heard the question what value can have the appointment of a representative of Armenia for the post of Secretary General of the CSTO. Can he in this position to promote the interests of our country?

— Armenia in any organization should try to promote their national interests, regardless of who is the representative of Armenia in this organization and how it plays a role. Mr. Khachaturov, as the head of the CSTO, can be both easy and hard to promote Armenia’s interests.

What do I mean? The statements made are not citizens of Armenia, especially those relating to Armenia, you can get a great sound and will be perceived quite differently if they are voiced by the representative of Armenia. In any case, according to the current principle, the position of the organization should remain unchanged, since in this process of paramount importance not the origin of the head, a reflection of the strategic vision of the CSTO.

Armenia one of those countries that try to follow an active position in CSTO activities and are authors of several initiatives. Armenia continues its policy regardless of the behavior of other countries-members of the organization.

Yuri Khachaturov was head of the General staff of the armed forces of the Republic of Armenia, Secretary of the National Security Council, and these structures, it is clear that directly related to the CSTO activities, implemented projects, which directly concern the interests of Armenia, and in General of the CSTO activity. This means that Armenia owns an Arsenal of possible actions that can serve as the good of our country and promote the CSTO’s activities.

— So, if Khachaturov tomorrow will make a strong statement against Azerbaijan, who carried out an act of sabotage against Armenia or Karabakh, CSTO, it will be perceived as subjective or unilateral step?

— This story was and during Bordyuzha, when his claims were awarded with the criticism of some of the CSTO countries. They argued that these statements were not discussed with them.

You must remember one thing: if necessary, in such events you need to react in time and firmly. It is clear that statements need to negotiate with the bureaucratic apparatus, and it is a process that requires time. This is especially true when we are dealing with such partner as Kazakhstan, whose appointment process of the Secretary General of the CSTO from Armenia so long.

So, having a partner, it can be assumed that the statements can elicit a different reaction from these members of the CSTO. They may say that this opinion was not discussed with them. But keep in mind one simple thing: or that statement is not done by one individual, this is not his initiative, and the statement of the entire organization.

We should also think about how we will treat those statements that can be made in the future occupying the post of Secretary General of the CSTO is not a citizen of Armenia, and for example representative of the same Kazakhstan.

This principle should guide the member countries of the CSTO. Alas, we know of many cases where the actions of some countries do not correspond to the interests of other members.

— You noted that the reaction of the CSTO needs to be timely. Meanwhile, after four days of war in April(ed — between Karabakh and Azerbaijan) statement of this organization sounded pretty late. If then the head of the CSTO was the representative of Armenia, would be delayed so this statement?

— There are two approaches. First: speaking on behalf of CSTO representative may Express my own opinion, considering the position of this organization, which was previously announced. That is, the statements come from already announced positions.

Second, the organization may present its own opinion about that particular incident, co-ordinate with other member States. That is, the delay statement can not be due to the fact that ahead of, for example, Saturday-Sunday, and the fact that in the organization there is no clear approach how to respond to the incident. Therefore, it was said that some of the expressions Nikolay Bordyuzha did not agree, the leaders of some member States.

With regard to possible statements regarding Artsakh(Karabakh), the statements of Yuri Khachaturov, the head of the CSTO, should be General in nature, must proceed from the policy of the CSTO. However, on the other hand, it is clear that for Mr Khachaturov, Armenian officer, it will be difficult to present such views that do not coincide with the position of the Armenian side.

In any case, the CSTO is the format in which we have learned to work, have the opportunity to protect our interests and use this organization to our interests.

— 16-21 April Azerbaijan held large-scale military exercises, which were attended by 30 thousand troops. However, may 1-5, again declared the doctrine, this time the Turkish-Azerbaijani. Should we consider that military threat to the region and, in particular, for Armenia and Artsakh?

— Azerbaijan is a country that contributes to the arms race, the country, which over the years acquired a huge amount of weapons, trained their army, and now tries to use his “achievements”.

It is no secret that Azerbaijan is trying to resolve the Karabakh conflict in a way that pleases him. For this he is ready to realize the power corresponding to the military scenario. The evidence for this is also April events. It is also no secret that Azerbaijan is trying to use such war games to improve the efficiency, training of the army. But experience shows that it is not very good at it.

On the other hand, military exercises remain a part of everyday life of any army. With regard to the fact that Azerbaijan is conducting exercises with Turkey, with anybody else? Although sometimes as a potential partner can act and Georgia.

So, considering they held large-scale exercises with different points of view, we need to evaluate it from the position of our regional security.