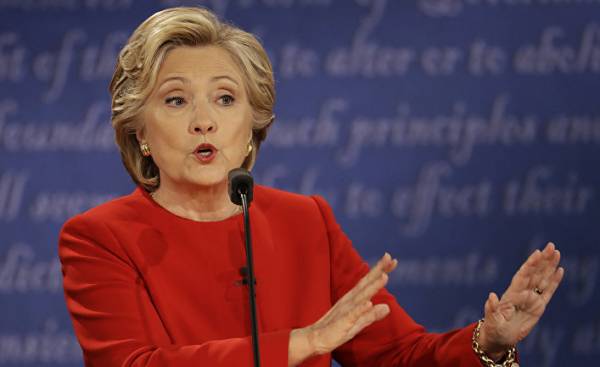 The mainstream media, members of the Democratic party and the rest hating trump, the world continues to support a false narrative regarding a hacker attack on Russian American elections. No matter that there is no evidence of such an attack, despite the ongoing more than a year investigation, conducted by American intelligence agencies, the FBI and bloodhounds journalists from Newspapers New York Times and the Washington Post.

These media promoting version on the Russian hacking attack, first undermined, and then destroyed the presidential campaign of Hillary Clinton. It was not the only reason for the defeat of Clinton. She was lazy and boring candidate. She ignored the voters, especially in the “Rust belt”, whose support is needed. She ignored the voices of white, working class and instead began to Woo the coastal elites, minorities and some other representatives of the coalition of the affected and dissatisfied.

And were the consequences of such a campaign, ignored or questioned significant sections of the electorate were needed to win in the presidential race. These reasons have doomed it to failure. Which is what happened. The media was complicit in her self-destructive behavior — they hide the truth that became obvious only in about 8 PM on election day. In the world of addictions the word “pander” could mean “ignoring the natural consequences of the behavior of the addict”. Nothing changes without the natural consequences. “The addict experiencing the devastating effects of addiction on his life has the most powerful incentives for change.”

Hillary had a dependence, dependence on government, dependence on the presidential race. The media supported her addiction and protect her from the consequences of the selected campaign strategy, and thus they rejected any incentives that might get her to change direction. In the end — so the alcoholic descends to the bottom — the presence in the room the elephant was obvious to all on election day when the States one by one began to show the consequences of her actions.

The first was the narrative. Hillary Clinton — “the most intelligent woman in the world.” President Obama told us: “Never has there been such a person — not me, not bill, no one at all, is more suitable to become President of the United States of America.” The media, like parrots, repeating it in a news program, panel discussions and comments. She was the second coming. We heard it, and Mrs. Clinton heard it.

And there was her opponent — caveman, caveman ignorant with IQs at room temperature. Objector from taxes, a womanizer and a sexual predator. A carnival Barker. Buffoon. The complete opposite of Ms. Clinton. The worst possible candidate for the presidential elections in history. We’ve heard it all in non-stop mode in news programs the leading television channels and most cable programs. In the panel discussions on Sunday morning, the opponents of the trump among the Republican establishment have repeated the mantra. Ms. Clinton heard it too. And believed it.

And what about the polls? All the fashion companies involved in the surveys told us that Clinton will win. With an overwhelming advantage. And company Real Clear Politics and Nate silver (Nate Silver), guru interviews — all were agreed that the chances of victory, Mrs. Clinton is from 90% to 95%. And they held this opinion until late in the evening on the day of elections. And finally, denying the existence of the electoral elephant in the room. It’s not only about the appeal of Donald trump for middle America. But Clinton’s campaign, continuing the analogy with addiction, was in a state of complete intoxication and loss of consciousness — there was all that demonstrates uncontrolled alcoholic.

In the recently published book “Unfulfilled: Inside the doomed campaign of Hillary Clinton” (Shattered: Inside Hillary Clinton’s Doomed Campaign), which tells about the backstage side of the presidential campaign of Clinton, we read: “This campaign was a terrible mess, which was attended by a tangled chain of command, petty jealousies, broken system of priorities and the lack of a sense of purpose.” The media created a picture perfect present facade, control and stability, but in reality, there was chaos and disorganization.

If the authors quoted the book knew, then why didn’t the media? But if they knew, why wasn’t he reported? Why they tried not to notice how Clinton lost consciousness on a street in new York, after which it like a sack of potatoes, just loaded into the waiting van? Why no one discussed her strange tick on her face, her squinting eyes, her sunglasses, her bouts of coughing that lasted five minutes?

Voters notice these things, despite all the efforts of the mainstream media for their cover-up. A classic example of pandering to the vicious habit. Who suffers from alcoholism the person is not passed out, she just needed to get some sleep. The person addicted to gambling, had no problems, just unlucky. A typical example of pandering, the relationship of mutual dependence between the media and Clinton, who has made a great effort trying to explain, justify or hide their failed campaign. Until the evening of 8 November, when it became obvious that it all turned into a farce.

It is not surprising that Hillary Clinton was suppressed in the evening on election day, she was unable to admit defeat or appeal to his supporters. Instead, she sent John Podesta (John Podesta) with apologies for a failed campaign. Mrs. Clinton listened to the flattering press she believed in her laudatory article about how smart she is and how she is well-prepared to become President. In the article that trump is a fool who can’t tie their own shoes. In the article about how America loves her. She will easily become mistress of the White house. Crushing victory. Her fate is finally decided.

It was all a clever fantasy invented by the media. A typical example of pandering to the addict. Excessive force from the press, aimed to make up for the lack of effort by Ms. Clinton. And all this time, ignored a blatantly obvious problem.

Treatment with the dependence of man is the program of the 12 steps. The first step is recognition of the problem. In the case of Clinton, it is about the recognition that her campaign was out of control. She couldn’t win. It was obvious to the authors of the book “Unfulfilled”. Joe Biden knew it. Michael Moore (Michael Moor) knew it. Bill Clinton knew that. However, they pretended that everything is fine.

If the media honestly covered her campaign, forcing its leaders to acknowledge that all is not so perfect and if they made a correction, who knows what would then have been the results of the election. But the train has already left.

It is ironic that trump despises the media played a significant role in his election campaign. You can call it karma. You can call it retribution. But while the media will continue to be in a denial mode, blaming the Russians and James Komi (James Comey) to victory trump, history is likely to repeat in 2018 and in 2020.

Brian Joondeph is a doctor, journalist and writer. He lives and works in Denver.