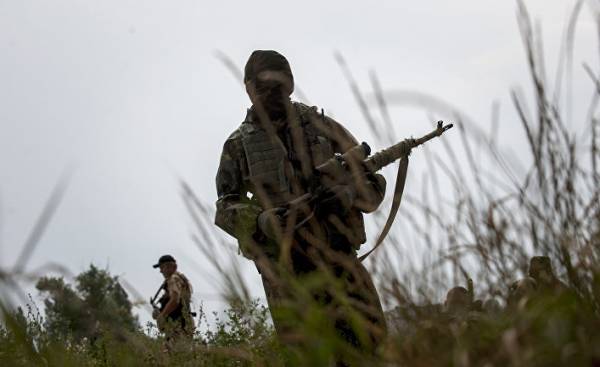 I read recently a story about a soldier who returned from the ATO and faced with the brutal reality of peace. Read it and thought: “the Horror, the separatists broke soldier, corruption, bureaucracy forced him to return to military hell.” I had no idea that soon they too will experience something similar…

The last days in Marinka was too tense. Daily silence is worried, but night battles were brought to life some intensity. Every minute when I was awake and on duty at the post, thought: now mine will arrive or will not arrive, will approach the enemy dig and cut or we will all end happily. So when the need arose to go for peace in Ukraine, they breathed a sigh of relief, thought I’d relax a little, family to see, but not everything went. Relatives greeted me warmly, though what else is back safe and sound, but the rest failed.

As soon as I got in the river, I realized that’s not the case here. Young boys and girls went downtown and talked on the subject, which is the iPhone the best fifth or sixth, and we are at the forefront talking about caliber cartridges to the machine gun — 5.45 or 7.62. Went into a cafe to drink tea, hear the company of drunken young people talks about the drinking of vodka at the party and inadequate alcohol girlfriends, and my sister in the dugout, gathered in the morning, count how many times we shot “separable”. The food train home, the neighbor on the reserved seat tell you how visited with friends, swam in the pool, Jacuzzi, and what should I tell them how I once a week took a shower, and that’s very good, and so bathed with wet wipes. You know, all these above persons are not to blame, that there is a war in the East, but why such a Gulf between the Donbass and peaceful Ukraine, between me and them?

Arriving at his native Ternopil region, in the evening had a little chat with the family and went to bed. Middle of the night woke up, and immediately a hand went to the edge of the bed, where always I had the machine. Not feeling it, panicked, slipped my hand under my pillow and felt grenades, he worried more and then I remembered where I was, and fell asleep more or less peaceful sleep. The next day went to the neighboring district to the relatives to visit the graves of grandma and grandpa. Entered the village, I smelled nostalgia, childhood, seven years there was not, much has changed. As we approached the house where the aunt lives, I heard arguing nearby. Some woman shouted at the drunk man and demanded that he returned the rubber boots that stole from her.

Met friends and asked what happened. I was told the following story. There is a village cohort of people who almost never work, always something to steal all the loot and the giving up of alcohol. There is a village in the so-called black businessmen who sell poor quality vodka, so they engage in such barter, accept, all that is of value: corn, sugar, household items. Where to watch the Chairman of the village Board and policeman, I do not know, the impression that it is not their problem. Visiting the cemetery, I spent the night with relatives and in the morning, sat on the bus, went home. Before leaving, I recalled the reaction of people who asked me about the war: “Oh, damned Muscovites, death to them no, when it’s over?” That’s all the residents could tell me about the war, someone else was cursed Savchenko, Poroshenko, and that sympathy ended. When I asked, is there anyone of them in the so-called anti-terrorist operation, he looked at me like a criminal and told me that there is nothing to go there fighting the oligarchs for money, they steal, drink, better to go to Moscow or to Poland to earn some money, buy a car, to put up a fence and live normally, and everything will be fine. I listened, and I wanted to sink into the ground. Is this my countrymen say, is that Westerners patriots?

Arriving to your regional center, I met a friend of a taxi driver. Stood, talked, he told me how recently he was approached by a representative of the government and in the voluntary-compulsory order asked to pass the 300 hryvnias for benches in the Park. When he replied that he pays taxes and let the money pass taxi drivers who drive without a license, and there are more than ten, she turned and walked away, and then, meeting with black taxi drivers, my friend called unpatriotic. I listened to this story and were surprised at the callousness of the leaders of the city. You know what is patriotism? In the controlled city, the law is violated every day, Central elementary restroom can’t do, as I can remember, everyone who comes to the city, surprised by this, and here is talking about patriotism. Live under Soviet law, a system of levies, a few times wear embroidered already believe that they are patriots. No, a patriot is one who lives thousands of kilometers from Ukraine, but reports on the needs of our soldiers, hundreds of dollars, the one who receives a pension of 1 thousand 200 UAH and some part of gives to help fighters, one who fights not for money but for the idea, but you’re just a pathetic officials who are entangled in their own lies.

Arriving home in the evening, I heard my sister told me mom about girl friend, who is studying in one of medcollege region and for each exam is required to pay 400 hryvnias, otherwise you will not pass the session. Teachers in private conversations motivated by the fact that they have families, children, they need to live somehow. Not respecting the propagators of knowledge, and where these children learn from you, need to get money to pay any of you, who should they give? You are going along, protesting under regional Council, consider themselves wronged, and who will protect the students from you?

It took another few days, wherever I was, had violated the law: the head of village Council session without a leased reserve land, the traffic police for passage in a state of intoxication received from the offender 2 thousand hryvnias of a bribe, in one of the villages of the region half of the residents sell unlicensed alcohol, the strength of which a variety of experiments with it: throw carbide, worn socks, mouse droppings and sell it. And this at a time when the Ukraine from alcoholism kills about 40 thousand people per year. Someone tells me what to do, need to live? Yes, you need to make money the honest way, sleeves rolled up, and not to kill people a defective product, profiting from someone else’s grief.

I look at it all and not know who is the greatest enemy of Ukraine: the separatists or the Ukrainians themselves? Aunt came to me and asked: “Terribly there is still going to war?” Yes, I will go, because you can’t be here and watch this hypocrisy, I can’t see how our country is being killed from the inside. I’m going in there to beat the enemy, and defeating it, turn off the machine in the direction of the enemies inside, and my hand will not tremble when I pull the trigger, because otherwise it is impossible.