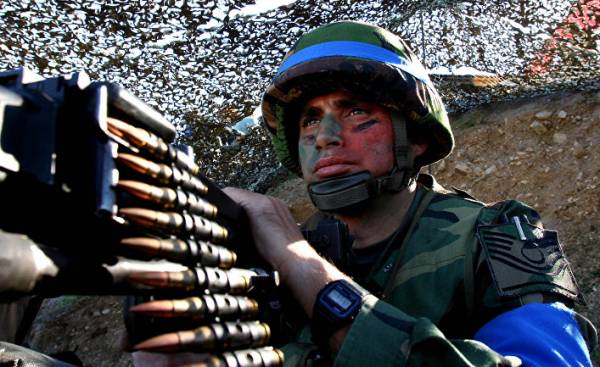 The senior aide of the Turkish President Recep Tayyip Erdogan hinted on Wednesday that the U.S. special forces in Northern Syria might be the targets for the Turkish missiles, if you will continue working with Kurdish fighters on the border with Turkey.

With his comments, a senior political Advisor of Erdogan Ilnur Cevik (Ilnur Cevik) made in the day when the Turkish leader held talks with Russian President Vladimir Putin discussing plans to create “security zones”, designed to stop the violence in Syria. Two weeks later, Erdogan will visit Washington, where for the first time will meet with President Donald trump.

In an interview on the radio, Cevik said that if the Kurds and the Americans will continue to work together, “we will not take into account the fact that there is an American armored car… Suddenly and quite by accident, they can suffer from missile attack.”

Veiled threats from NATO ally to use force against American troops show how risky and confusing was the US intervention in the civil war in Syria. They can further poison relations between Washington and Ankara, which are already strained in 2016 after a failed coup in Turkey.

For several weeks, American special forces very visibly present in the Kurdish areas in Northern Syria. First saw them in the city Manbij, which was threatened by Turkey-backed Syrian Arab militants. At the weekend, new photos of American soldiers who passed through the town of Qamishli near the place where last week, Turkey launched air strikes by U.S.-backed Kurdish fighters, killing 18 volunteers.

Demonstration of American military power was a blatant reminder that the United States supported the Kurds, who constitute the majority in the “Syrian democratic forces”. This coalition, composed of local militants numbering 50 thousand people currently occurs in the direction of the stronghold of ISIS (banned organization in Russia — approx. transl.) city Raqqa. The American military command said that the Kurds are the only capable force able to defeat the militants of the “Islamic state” in Syria.

Ankara is experiencing a lot of anxiety from the fact that the United States continues to maintain relations with the Kurdish people’s protection Units YPG in Northern Syria, which Turkey calls terrorist groups. More the situation is complicated by the fact that Russia has deployed to Northern Syria, part of his troops, and signed with the local Kurds, some agreements, which also cause concern to the Turkish authorities.

The official representative of the military coalition in Iraq and Syria, Colonel John Dorrian (John Dorrian) stated that Americans were sent to Northern Syria for one simple reason. “We heard reports of clashes between Turkish forces and our partners in the border area, he said. — Therefore, the American command decided to assess these reports in order to decide what steps should be taken in the future.”

Meanwhile, on Tuesday trump and Putin spoke about Syria by telephone, agreeing “to search options, designed to consolidate the cessation of hostilities, to give it stability and controllability”, as reported on the website of the Kremlin.

After a meeting with Erdogan on Wednesday in the Russian resort city of Sochi, Putin began to insist on new measures in Syria, calling for the creation of “security zones” and stating that he had discussed the issue with President trump. In the message the White house about a telephone conversation this part of the discussion is not mentioned.

According to Putin, “no-fly” zones will be four specific district in the Western part of Syria, but they will not enter those areas, where the fighting against ISIS and “al-Qaeda” (banned in Russia organization — approx. transl.)

Peace talks in Kazakhstan between the moderate Syrian opposition, the Syrian regime, Russia, Iran and Turkey these proposals came to nothing lead. On Wednesday, representatives of the Syrian opposition left the negotiations due to the fact that the Syrian government continues to inflict strikes on hospitals and civilian installations, and Iran plays a role in this war.

“Iran is an aggressor state and the enemy of the Syrian people. It’s part of the problem, and we do not agree on its participation in negotiations on the future of Syria as a guarantor or sponsor”, — reads the statement of the opposition.

United States in these negotiations act as the observer, and represents them as acting assistant Secretary of state for middle Eastern Affairs Stuart Jones (Stuart Jones). An official from the state Department confirmed to Foreign Policy that Jones met with all participants of negotiations “with the exception of the Syrian regime and Iran.”

Russia expressed hope that Thursday will still be able to sign a Memorandum on ceasefire, and that the opposition will return to the negotiating table.

But even if the agreement is signed, there is no particular reason to believe that it will be more efficient than the previous failed truces, especially due to the fact that there is no specific way to hold the Syrian air force from bombing civilians.

“People have no real reason to believe that the truce will be sustainable, said senior researcher of the Middle East Institute Charles Lister (Charles Lister). — This is another agreement that is based solely on trust. And confidence between the opposing forces on the ground there.”