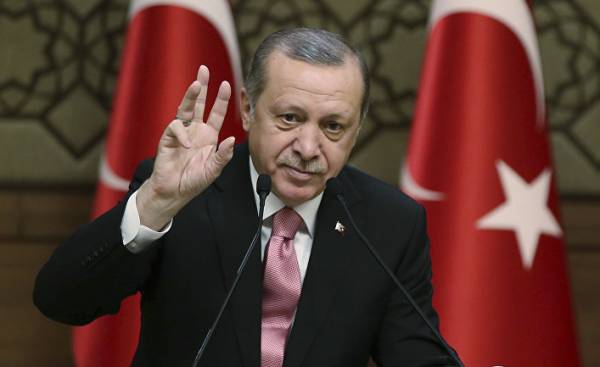 Abdullah Gul is not considered a dissident. Former Turkish President missed a lot of opportunities to rebel against his party colleague and successor to Recep Tayyip Erdogan: the Gezi Park protests and investigate on corruption charges in 2013, controversy over Internet censorship in 2014.

After stepping down as President in 2014, Gul actually left politics. But a few days before the constitutional referendum on 16 April, the hopes of the conservative opposition in Turkey again focused on him.

So far Gul has not publicly spoken out either in favor or against the presidential system, which would unite all power in the state in the hands of Erdogan. April 1, but he pointedly stayed away from a rally of the ruling party AKP in his hometown Kayseri.

The government of Erdogan, which now seldom openly contradict the President, such behaviour is considered an insult. Close to the government, the media cursed Gul, calling him a “traitor.” His silence shows how controversial is a proposed change of the Constitution in Turkey.

Although Erdogan gives the impression that all the people for him. His rallies are reminiscent of the religious masses; last Saturday in Istanbul hundreds of thousands of people welcomed him. But under the surface of all bubbles.

At least 50% of Turks oppose Erdogan. They consider him a despot. And even among his supporters, increasing the resistance. Ex-President Gul is considered a tactician. He hardly would speak against Erdogan, if not expected, on 16 April, the majority will say “no.”

Erdogan linked his political future with the result of the referendum. The new system will give him the authority, which was not even the founder, Mustafa Kemal Ataturk. He can appoint Ministers, as well as 12 of the 15 constitutional judges and dissolve the Parliament at will. The post of Prime Minister will be eliminated. Erdogan said that reform is needed in order to ensure stability and prosperity.

Sentop Mustafa, the Deputy head of the AKP and the Chairman of the constitutional Commission in Parliament, compares Turkey with a car: for many decades the country was ruled not only the driver, the government, but passenger — army. “We want permanently to remove the passenger,” said Santop foreign journalists in Istanbul.

Before the vote, Erdogan resorted to the help of the entire state apparatus, police, justice, administration of. However, the outcome of the elections remains open. Public opinion polls are significantly different. Some sociologists believe that the camp of opponents of transition by 5 percentage points ahead.

“The AKP, in contrast to previous election campaigns, can’t ignite any enthusiasm, says Turkish sociologist Kemal Oscuras. She doesn’t have enough arguments to convince people of the necessity of changing the Constitution.”

Once Erdogan was himself a reformer. At the beginning of his tenure as Prime Minister in 2003, he was a great Alliance of the frames of the Islamist movement “Milli Gorus”, moderate Muslims, liberal opponents of the Turkish military regime.

But on its long journey to autocracy, Erdogan has sacrificed allies. The AKP, the once proud national party has degenerated into a vicarious agent of the President. For the independent moderates in the AKP.

Not only gül, but also former Prime Minister Ahmet Davutoglu and his Deputy bülent arınç has distanced himself from Erdogan. Of the 50 founders of the AKP has less than half. The program of the party is now defined by radical forces such as Melih gökçek, mayor of Ankara.

Gökçek of the Turkish capital controls for 23 years. He was a member of various political parties before he joined the AKP. Gökçek attacks on opposition activists and journalists on Twitter. He argues that ex-US President Barack Obama created ISIS (a terrorist organization banned in Russia — ed.) and foreign powers cause an artificial earthquake in Turkey.

Gökçek, akin to Erdogan, said that Turkey was surrounded by enemies: the plotters of the Gulen movement, PKK terrorists. Europe will leave in the lurch the Turkish government in the fight against terrorism. “You call yourselves Democrats,” he says in an interview with Spiegel. “But you denied entry to our Ministers”.

Turkey, according to Gökçek, for many years working to become an EU member. But Brussels has consistently rejected the country. “We don’t like. You treat us brutally”. According to him, foreign media such as Der Spiegel, coverage of events is biased. “You are insulting Erdogan by calling him a dictator. Why? Turkish government submits to the will of the people.”

Erdogan expressed a similar opinion during his speech. He scolded the Europeans called them “fascists”, “terrorists”, “racists”, and threatened to hold a referendum on the abolition of the accession negotiations with the EU. The AKP, as Turkey, the President is in the role of victim. His slogans against Europe needs to mobilize the nationalist electorate.

Disappointment in the party

The tip of the AKP expects to win the referendum. She has no plan B, in case of defeat. Therefore, observers say, likely is such a scenario: if the majority of Turks on April 16 to vote against the presidential system, Erdogan will announce a new election, so as to secure a two-thirds in the Parliament, the required majority for changing the Constitution.

But there is the likelihood that Erdogan’s criticism against the President. The AKP has accumulated a disappointment. April 16 is the day when Abdullah Gul, the eternal cantelmi, still dare to come out of the shadows.