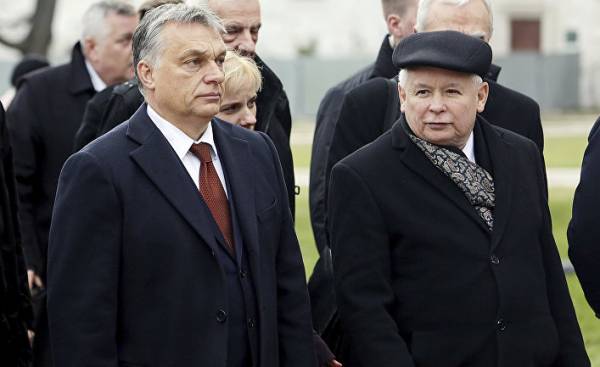 Poland and Hungary are interested in the victory of the candidate from the National front, which definitely would plunge the EU into a deep crisis, diverting attention from their problems.

The deep polarization of French society, which represent candidates of the second round of the presidential election, manifests itself still more evidently, if you take a step to the side, in other European countries.

In Poland it is more striking, as reflected in the Polish society. The polarization manifests itself in present-day Poland, as in any other country: if yesterday she was a Prime example of the successful integration of the former Communist republics in the European process, today it is fragmented and is gradually moving away from the values of the European Union.

Representatives of Polish civil society, which became the target of attacks of the ultra-conservative government of the party “law and justice” Jaroslaw Kaczynski, anxiously asking passing close to the French journalist whether Emmanuel macron will win.

“The government secretly hopes for the victory of marine Le Pen, because it will put an end to the escalating tensions with Brussels,” says one of them.

At the same time flirting the candidate of the extreme right with President Vladimir Putin of concern in the country in the period of the deployment of NATO forces in response to Russia’s actions and fears about the aggression of the former “big brother”.

The same mood prevails in Hungary, where Viktor Orban once again came in for criticism by the European Union, another authoritarian measure. This time related to his attempt to close the Central European University, funded by the hated American billionaire of Hungarian origin George Soros (George Soros). Were last week in Brussels, Orban received a harsh rebuke from the MEPs, however, she was not impressed.

From Jaroslaw Kaczynski, Viktor Orban, marine Le Pen different political ways. Little in common and in their present position in the political arena. Whatever it was, they all share common views on “illiberal democracy”, in the words of American journalist Fareed Zakaria (Fareed Zakarya), as well as criticism of the European Union and its supranational structures.

Despite all their differences, Warsaw and Budapest are very interested in the victory of marine Le Pen which, of course, would plunge the EU into a deep crisis, diverting attention from their problems. At the same time the victory of Emmanuel Macron, who favoured a European process and a multi-level Europe can threaten them with exclusion.

They see the draft marine Le Pen a return to national sovereignty and the restriction of European construction with a minimum of intergovernmental cooperation. This project would strengthen their hands to implement their “non-liberal” plan of destruction necessary for democracy balances in government. By the way, he was already running: controlled by the constitutional court in Poland, attacks on the independence of the courts in both countries, the strengthening of control over the press, strict oversight of education, attempts to rewrite Polish history… All these decisions would become today an obstacle to the accession of Poland to the EU Charter on human rights, which is included in the Lisbon Treaty of 2007.

Makron is virtually unknown in Poland

Anyway, back this relationship goes. Marine Le Pen is almost no mention of these countries that go through political means, reminiscent of her own. The more that these governments can hardly be called examples of success, and that they are at the heart of the French problems (e.g. transferred to Poland of the Whirlpool plant).

In any case, Warsaw and Budapest are on the path, which can become a way for marine Le Pen in case of victory, the gradual decline of the legal state and the formation of new structures of control over bodies and minds. Lost liberals “fight for Gdansk” (we are talking about the new world war II Museum, whose Director had to leave the post) testifies to the Central role of history as seen in France in the entourage of marine Le Pen.

In Poland and Hungary, civil society is very actively pursuing the part of the population against the political projects of governments against the closing of the Soros University in Budapest, against threats to press freedom in Warsaw… people Have a sense of returning to the distant past.

Edgar Morin (Edgar Morin) describes in Le Monde this phenomenon: “Everywhere, including in Europe, the political regression generates authoritarian postdemocracy that the word “populism” describes not the best way. We are all under threat in this historical period. (…) We know the path that leads us NetFront. This is the way authoritarian postdemocracy Putin, Orban and Erdogan, which is distributed at the continent”.

The victory of Emmanuel Macron in the first round of the elections was an unexpected surprise for the Polish civil society. French domestic policy is not in the center of the interests of poles who know marine Le Pen, but little is heard about the former Minister of economy. Today they have questions about his true power, of the project, the ability to give impetus to the rise of Europe on the background of political regression.

The weak response of the EU

Europe also has little to do with the rise of “post-democratic” regimes. The European construction has performed a miracle, restoring democracy in Greece “black colonels”, Franco Spain and Salazar Portugal, which were dictatorships for several decades. In the 1990’s, everyone thought that the same thing will happen with the former Communist countries of Central and Eastern Europe. In fact, everything happened exactly the opposite, as evidenced by the rise of populism and authoritarian doctrines.

Launched against Poland and Hungary procedures represent only a very weak reaction on the contrary to the EU values change. The fact that the process of European construction is different from other regional entities and trade associations in the first place so that he has a democratic Foundation.

So what to do with Poland and Hungary, which are gradually moving away from these values? In case of a victory of marine Le Pen in France, this question would not even stand because of the tensions in the EU. So before you go to vote or make a decision on the non-appearance be worthwhile to look at the countries that preceded marine Le Pen on the “post-democratic” way…