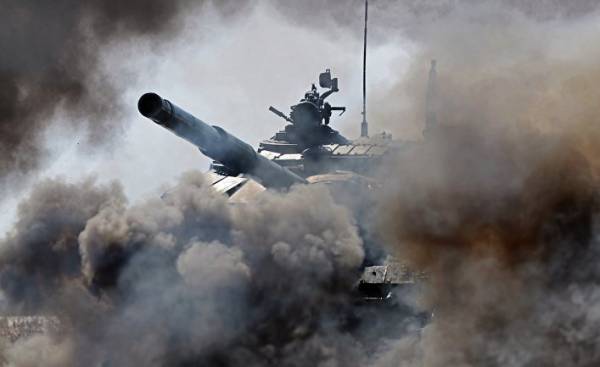 The first years of the XXI century the world is struck by the rapidity of change. Unfortunately, the dynamics of political events does not adjust to the optimistic and disturbing. Increasing armament of China and Japan escalate the situation in the South China sea, the destabilization of the middle East and North Africa migration crisis, the instability of the Euro and the dollar on the world markets is only part of the problem with which we have to deal with in the near future. In Warsaw, a special concern is the conflict in Eastern Ukraine that could deepen and lead to serious consequences for Poland.

The role of the Russian Federation in the former Soviet Union in the former Soviet sphere of influence, gets very different estimates. Moscow’s influence is noticeable on the outside of Russian territories with Russian-speaking population, and this can lead to destabilization of these regions, as seen in the example of Donbass and Transnistria. Russian officials say they are simply protecting the Russian minority, but the truth is that the true intentions of the Kremlin, no one knows.

Russia is already so great that she doesn’t need a single inch of more land, stated in the mid-nineteenth century, Tsar Nicholas I, meanwhile soon the Imperial policy of this country reached the peak of its activity. This was manifested, in particular, in the war with the Ottoman Empire, France and England in the Crimea, the suppression of the Hungarian uprising in 1848 and Poland in 1863, and the war in the Caucasus.

The idea of the continuity of Russian policy is very precisely formulated in his book “From white to red tsarism” the Polish historian Jan Kucharzewski (Jan Kucharzewski). While in exile in America, he argued that Russia’s policy remains unchanged regardless of successive regimes. Of course, we can’t hold modern Russians blame for their legacy, however, look at the events from a historical perspective allows us to understand that they do not like to abandon the argument of force.

In the approach to Russia is needed the obverse and reverse. Constructive dialogue on the one hand and power on the other. In mutual relations, we should be hardness and ability to resist, but at the same time — readiness at any moment to extend an olive branch. This is one of the most effective and sophisticated methods of diplomacy.

As a member of the international Affairs Committee of the British Parliament, during the discussion on Russian-English relations I raised the issue of returning to Poland the wreckage of the presidential “Tupolev”, which Moscow uses to aggravation of the situation in Europe.

British and American leaders have repeatedly supported Poland diplomatic support. In the 1980-ies experiencing a great sympathy for the poles, Prime Minister Margaret Thatcher held a Downing street meeting with the General Secretary of the CPSU Mikhail Gorbachev. They were held in a friendly atmosphere, however, the “iron lady” had on the Soviet Union, the pressure on several important issues.

It should also be recalled, as was the policy of Ronald Reagan, which did not allow the USA has lost its dominant position, but also has built personal relations with Gorbachev, and led to the end of the cold war.

The new symbol of the brotherhood-in-arms

Insights from the past allow us to look to the future and the efforts of Warsaw, aimed at strengthening its defense capabilities and establish close military ties with Britain and other NATO countries. In Poland this year net profit of 150 soldiers British Dragoon regiment with full equipment, which is located in the town of orzysz in the warmińsko-Mazurskie Voivodeship. This, of course, only a first step to deepen our bilateral military ties, but it became a very important symbol of partnership in this area.

Last summer I visited the town Piaski, which lies on the Vistula spit from Polish-Russian border. I would not like to see this region began to resemble the border area between North and South Korea, however, it appears that the ability to solve problems through diplomacy will be able to guarantee only the balance of power. I meet regularly with representatives of the Polish leadership and the first year lead the campaign for the establishment of NATO bases on the Eastern Bank of the Vistula. Polish-British base as functioning on a rotational basis or permanent, will be another symbol of our brotherhood-in-arms. Polish and British troops stationed not only in Szczecin but also in the line of the Vistula river, will be the guarantors of peace in the region.

Modern war is not like the conflicts of the past with clearly defined front lines. This hybrid conflicts in which a particularly important role may be played by the concept of territorial defence. Volunteers will not, of course, the replacement of a normal army, but they can be an important element that supports the morale of the population and helps the regular armed forces in the rear.

In recent years, in the UK there is a growing interest in joining the military reserve for service in the special forces. I hope that cooperation of our unit SAS and Polish GROM the group will become more active and effective. The following step which you should think, is the simplification of access to the personal weapons responsible for the poles without criminal records who have undergone special training. The best example of a state that has secured their internal and external security, is a Switzerland — an incredibly hard nut to crack for a potential aggressor.

Poland is an integral element of the world architecture

Projects, some European officials could lead to the expulsion from Europe of the us-British forces, which since the end of world war II served as the guarantors of peace on the continent. In connection with PACSICOM UK understands the importance of establishing strong bilateral relations with ready European countries. I am encouraged that Chairman of the party “law and Justice” (PiS) Jaroslaw Kaczynski (Jarosław Kaczyński) features a thoughtful approach to Polish-British relations, which I had the pleasure to discuss with him. Evidence of strengthening these relations serve became more regular meetings of the so-called Quadriga (Ministers of defence and foreign Affairs of the two countries), international meetings and events, sponsored by non-governmental organizations the economic and cultural profile.

A true indicator of intent in foreign policy are: economic contacts. The more British, American and canadian investment will come to Poland, the more there will be a joint Polish-English companies and projects, the stronger will be the ties between our States and peoples. The West, in contrast to idealists, poles, typical Mercantile approach, so that the intensification of trade relations will strengthen the capacity of the Polish state and make it an integral element of the world architecture. I grieve reports that some companies refuse from investments in Poland and choose its neighbours, citing the fact that they are enjoying greater tax and legal stability. I hope economic ideas of Deputy Prime Minister Mateusz Moravcova (Mateusza Morawiecki), which is trying to attract serious investors to long-term plans for the development of Polish industry that could bring Poland into the silver age, described in the books of Paul Jasienica (Paweł Jasienica).

My late grandfather Roman Kawczynski (Roman Kawczyński), which is in the middle of the last century deprived of property acquired by previous generations, and doomed to poverty, told me that the world is the main value, and its pillars are: economic and military strength. I believe that in the history of Poland and Britain, an era of making correct decisions.

Daniel Kawczynski member of the International Committee of the British Parliament, a former adviser to Prime Minister David Cameron.