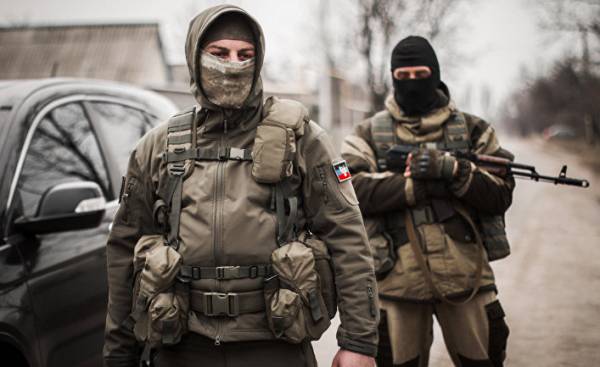 According to the army and other sources, a well-known fighter who fought on the side of Pro-Russian separatists in Ukraine and participated in the far-right French politics, recently received training in the U.S. army and now serves in an infantry division in Hawaii.

29-year-old Guillaume Cuvelier (Guillaume Cuvelier) began basic combat training in January, but by its end became an infantryman at Fort Benning, Georgia. In a brief interview with the Washington Post Cuvelier podojil that is on active duty in the U.S. army.

It is well known that this person adheres to the extremely right-wing and fought in the armed groups, supported by the enemy of the US. So the fact that he managed to become servicemen of the American army, raises questions about the set, and how thorough checks of the candidates before making the service.

Cuvelier was born and raised in France but has dual French-American citizenship. His early years the man had lived among the French ultra-nationalists, and in 2014 took up the Kalashnikov and began to fight in the East of Ukraine, as evidenced by posts on social networks, a documentary in which he took part, as well as people known it. A year later, Cuvelier had fought in the ranks of Kurdish fighters, the Peshmerga in Northern Iraq, and then returned to the United States of America.

After inquiries by the Washington Post, the military began an investigation, “in order to ensure that the process of selecting that person complies with all standards and procedures”, said in an email to the representative of the command set in the US army Kelly bland (Kelli Bland).

In Ukraine, Cuvelier, also known under the Callsign Lenormand, fought on the side of using Russian support for the Donetsk people’s Republic. The territory seceded from Ukraine, and when the Washington-friendly government in Kiev called it a terrorist organization, were sanctioned by the US. Service Cuvelier in the army of DNR, apparently, is a direct violation of the presidential Directive of March 2014, which was to act against the Republic in June of the same year. This Directive prohibits U.S. citizens to assist “Finance, goods and services” under any sanctions on the legal entity in connection with Cuvelier may be subject to criminal prosecution by the Federal authorities.

Ground forces are often not allowed into their ranks those who adhere to extremist views and carries out extremist actions, he said in the email the representative of management on Affairs personnel and a reserve US army Lieutenant Colonel Randy Taylor (Randy Taylor). Taylor added: “In the case that the official representative of land forces establishes that wishes to enter the service meets the standards of the U.S. army, he may in exceptional cases allow the one who corrected the mistakes of the past, to serve their country. But many involved in gangs or extremist activities deprives of chances to become soldiers”.

Cuvelier said that he has changed.

“The U.S. army is my only chance to break with the past and move on, he said by email. — I realized that I love my country, its lifestyle and its Constitution, and is ready to protect her”.

“Publishing an article about me, you would jeopardize my career and would render a great service to those who are trying to put army in an awkward position. My former Russian comrades will love it…. so please do not publish my name and my photo”.

Having dual citizenship, Cuvelier had to undergo a more thorough inspection, wish it to serve in positions requiring top secret clearance. But as said, the bland, grunt, such an admission is not necessary. If Cuvelier was not made in the USA serious criminal offences, there is no reason to forbid him to serve in the army, she added.

Cuvelier grew up in the French Rouen, and in 2009 she graduated from the local University, reported on his page in Facebook which was later removed. His younger brother Gabriel Cuvelier told the editorial Board that the family have a “pretty difficult”, but did not go into details. He noted that his brother was always kind, loving and “never sought the limelight”.

Found in the Internet documents show that Cuvelier was an active member of the Party of France, which in 2010 broke away from the National front of marine Le Pen. French analyst Jean-Yves Camus (Jean-Yves Camus), studying extreme right-wing movements and watching Cuvelier, likened the Party of France with the American white supremacist group called the “national vanguard”.

Cuvelier was a member of the neo-fascist organization “Third way” and the movement “Young identitarians”, as reported by a freelance researcher, the Vienna Institute for human Sciences Anton Shekhovtsov, studying right-wing movements of Europe and a lot of writing about the conflict in Ukraine.

Younger brother Cuvelier could not explain how Guillaume got in touch with the French extreme right, however, stated that “the views of the brother led to his acquaintance with such people”.

“I think when he was in France, he became as it is understandable that honest politics is impossible, and so he decided to act differently — said Cuvelier, Jr. in the letter. — That’s all I can say.”

Arriving in mid-2014 in Ukraine, Cuvelier helped to create a Franco-Serbian unit of foreign fighters called the Unité Continentale. This group has posted on his page in Facebook the Manifesto, which says that NATO is “a terrorist military Alliance” and that France had become “the slave of the American Empire”. The views of this group based on the ideology of “continentalism”, which preaches anti-Western Russian political scientist Alexander Dugin. On the page of this group also posted a lot of posts from July and August 2014, which outlines the request for financial assistance and Bank account Cuvelier in France.

“Russia represents the power. Force of resistance that we want to return to the West. A society based on tradition, family, patriotism,” says Cuvelier was captured in the 2015 documentary film Polite People, explaining the reasons that led him to join the ranks of the separatists. This is a film about Western militants who are fighting in the East of Ukraine.

It says that a group of militants Cuvelier took the name Team Vikernes after the Norwegian artist of black metal, the self-styled Nazi and convicted criminal Varg Vikernes. After some time, Cuvelier left Unité Continentale.

On the page Team Vikernes has a video showing fighters of this division, leading the fire near the Donetsk airport, where in the winter of 2014 were fierce battles between Ukrainian troops and separatists. Cuvelier refused to answer questions about his service in the East of Ukraine, and when the editors began to send him text message, he replied: “actually, I’ve never been to the DNR. It was a hologram”. Further comment from Cuvelier refused.

But in the documentary there’s a photo Cuvelier with a medal on his chest. In it, he stands shoulder to shoulder with Igor Girkin (in the summer of 2014 he was commander of the separatist forces). In the film, says that the medal Cuvelier was able to award in 2015 in Moscow.

The us Treasury Department imposed sanctions on Girkin for his work in the ranks of the separatists. Speaking in one program on Russian radio, he admitted that he gave the order to execute looters. In the U.S. he also is accused of preparing actions for the destruction of the aircraft Malaysian airlines MH 17 that was shot down in Ukraine in the summer of 2014, all 283 were on Board people were killed.

After Ukraine Cuvelier in 2015, headed to Northern Iraq, where he amassed a unit of foreign fighters who fought on the side of the Kurdish militia, the Peshmerga.

This unit is called Qalubna MA kum from late 2015 to mid-2016 was stationed in Decuce in Northern Iraq.

British photographer Rick Findler (Rick Findler), who spent in this office for 10 days, said, “They thought that they would come with their weapons and immediately begin to fight. But instead, they had for several months just sitting in the room.”

The Peshmerga eventually made Cuvelier to leave Iraq when he was accused of beating a rifle of American volunteers. This was reported by the physician of the Peshmerga Eloisa Jira (Heloisa Jaira), who had treated the victim.

A few weeks later Cuvelier appeared in the United States.