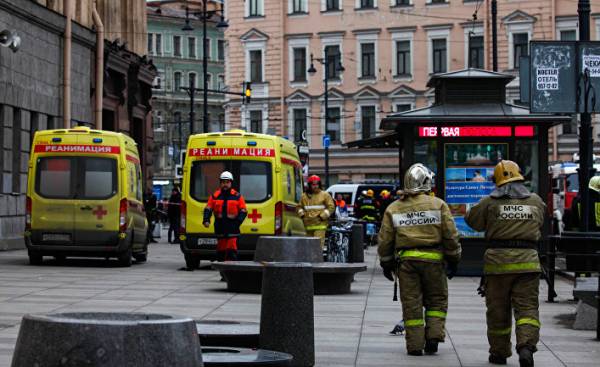 The house family was and Akram Asimovich in Jalal-Abad in southern Kyrgyzstan are working on laying new water pipes. And the workers dug trenches turned the streets of this populated mostly by ethnic Uzbeks quarter into a kind of academic obstacle course.

So when on April 11 at the front door of their house knocked on the man who introduced himself as an employee of the local water company, no-one was surprised. But then he started asking strange questions. “In this house of Russian citizens live?” — the man asked. Then, giving the fact that he is well aware of the details regarding the residents of the house, he asked the following question: “Akram here now?”. He opened the door to a woman, frightened, interrupted the conversation.

Six days later, Federal security service of Russia (FSB) triumphantly announced the arrest of Abror Azimov. According to the FSB, this 26-year-old man was the organizer of the incident on 3 April in the St. Petersburg metro blast that killed 16 people, including the alleged perpetrator. The detention was the officers captured on dramatic footage of the FSB RAID on a young man near the driveway under the railroad in one of the suburban towns. Then, on the record, which has undergone a major installation, you can see how to find when Was a gun and a plastic bag with two cell phones.

According to investigators, was called to the suspect committing the crime, 22-year-old Akbarjon Jalilova for a few minutes before the explosion. Confiscated was phone confirmed the existence of a relationship between the two persons, said the investigation. The circumstances of the arrest of Akram Asimov, older brother Abror seem at all strange.

Again, the FSB had released dramatic footage of its operational success. At the scene, according to officials, unfolded on April 19, the FSB jump out of the car and grabbed Akram, standing at a bus stop in Moscow — a town a few kilometers from the Moscow ring road. Staff then inspect the bag Akram and discover the old Soviet grenade RGD-5.

According to investigators, Akram played the most important role in the bombing — he gave all the accomplices of money and forged documents. Currently, on suspicion of involvement in the bombing have been arrested more than 12 people. All of them came from Central Asia. But the FSB about Akram many inconsistencies.

Earlier in mass media it was reported that Akram was in Kyrgyzstan, not Russia. EurasiaNet.org managed to confirm this fact on the basis of the results of its own investigation. When the house family Asimovich in Jalal-Abad came man, who identified himself as a representative of the plumbing company, he failed to know that Akram at this time was in Osh, about 150 miles from home.

Akram lived in Russia around the end of 2013. He and his brothers moved to Russia from the Ukrainian city of Khmelnitsky, where they had a small diner at the local market. In 2014, just a few months after the move, Akram and Abror received Russian citizenship. As told EurasiaNet.org the younger brother of Akram and Abror — Bilal — Akram arrived in Osh on March 28 to spend a few weeks with family and undergo surgery for chronic sinusitis.

April 3, the day of the explosion in St. Petersburg, several members of the family Asimovich — Akram, Bilal, their mother, his brother’s wife and their children — left to walk in all day. According to Bilal, just that day the employee of road inspection took Akram driver’s license for Parking in the wrong place. In Kyrgyzstan, withdrawal rights is a common method of ensuring payment of the fine the offender. Akram returned to the right only a few days.

In the following days, according to Bilal, Akram spent most of his time at home. He played with their young children (two sons and a daughter), rested and fixed up the old bike. Bill not noticed in the behavior of the brother of the overuse of religion or suddenly appeared deep piety. “While he was here, he never once in the mosque did not go,” said Bilal.

The first signs of trouble appeared on April 15. In the second half of the day to the house Asimovich again there came a man who previously identified himself as an employee of the plumbing, but this time he said he is a taxi driver. He informed the family that Akram was asked to send his passport in Osh.

Not believing this man, the mother of Akram, Wazir Mirzakhmedova, tried to call my son, but was unable to contact him. But then came he called someone and handed the phone to Mirzahmedova. On the other end was Akram, who said that he was detained by the staff of the State Committee of national security directly in a clinic in Osh, where he was treated. It became very clear that a person, formerly a representative of the water company and a taxi driver, actually was associated with the Kyrgyz security services.

In a private clinic “hasiyat” family Asimovich was given a certificate signed and stamped, confirming that April 15, Akram was there for treatment. Also, the fact the hospital staff confirmed and in conversation with a representative EurasiaNet.org. How Akram then was in Russia, remains unclear.

Four days after staff took Akram hospital, he was arrested in the suburbs. On the day of his arrest, security sources in Kyrgyzstan told the news Agency “RIA Novosti”, Akram went to Moscow on their own. “Akram Asimov deported from Kyrgyzstan. At the request of Russian law enforcement agencies, he voluntarily went to Moscow to testify in the investigation,” the source said. But Bill argues that this is not like Akram — he definitely would have called the family before to go to Russia.

According to available information, the only thread linking artist Jalilova brothers Azimovym is a phone call just before the explosion in the subway. On this basis, the Russian investigators have built the large version, which is poor in details, but alleging a complex conspiracy of representatives of different countries.

Perhaps the most suspicious — but indirect — evidence against the brothers are their trips abroad. Akram on statements maintained ties with international terrorist groups and received money from them during a brief trip to Turkey.

Bilal confirmed that Akram traveled to Istanbul for two days in 2016 on the recommendation of his doctors advised him to spend time by the sea. During the trip Akram filmed themselves on video on the beach and sent a tape to the family.

Abror also was passing in Istanbul last year on the way to South Korea where he, according to Bilal, hoping to enter the country on a short-term visa and find a job. This idea he allegedly filed a relative working there. But was launched at passport control and told to leave the country, which he did, fly first to Vladivostok and then to Moscow.

Fly to South Korea via Turkey is much more expensive than, say, in Novosibirsk, that raises questions why Abror chose this route. In the investigation of the explosion in St. Petersburg has been arrested and the other person.

Almost immediately after the explosion, on suspicion of complicity have been arrested at least six people living together with Jalilova. During a search of their apartment was allegedly discovered firearms.

Recently, the court held a hearing on the case of one who lived with Abror Azimov people, citizen of Tajikistan sodica Ortikov. According to the investigation, in one of the bedrooms that I shared Asimov and Ortikov, found a Makarov pistol. Ortikov says that the gun was not his. According to the newspaper “Kommersant”, the investigation also imposes Articulo blamed what he called him, but this is a strange accusation, because they lived together and, of course, could communicate.

The Prosecutor General’s office of Tajikistan was initially denied reports that Ortikov is a citizen of this Republic. But when the reporter EurasiaNet.org contacted the Tajik interior Ministry spokesman confirmed that Ortikov really comes from the Tajik district Tursunzade, located on the border with Uzbekistan. Press Secretary, however, asked not to focus on this detail, because it could damage the reputation of the country.

Inconsistencies seem to arise in many aspects of the investigation. Dozens arrested on suspicion of involvement in the explosion in St. Petersburg and other unspecified charges of terrorism have one thing in common — almost all of them are immigrants from Central Asia.

Russian television did not fail to emphasize this fact in his report from Osh on 23 April in which the city and the whole of Central Asia was presented as hotbeds of religious radicalism. “They came to our country specifically to commit a terrorist attack,” said the presenter at the beginning of the story.

Numerous media reports in the same spirit has raised fears that the natives of this region can become the main target of Russian migrantophobia. Representatives of civil society of the countries of Central Asia and Russia began to collect signatures under a petition calling to slow down the tone of rhetoric and separately releasing the alleged irresponsible statement by the head of FSB Alexander Bortnikov.

“Collective responsibility for the attack imposed on labor migrants from the CIS, — stated in the petition, which has already been signed by dozens of activists, journalists and writers. — The consequences were not long in coming. Began a chaotic intensification of law enforcement, a wave of indiscriminate and unjustified detention, threats, violence and extortion against labor migrants from Central Asian States, which have no relation to the explosion in Saint-Petersburg”.