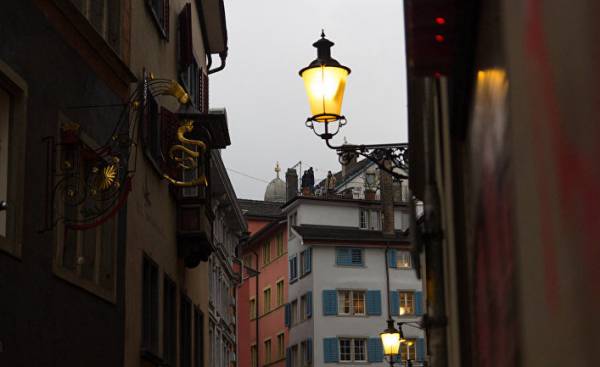 A small two-bedroom apartments for families of four. In the early 1950-ies in Switzerland it was common standard of residential comfort, and that is in accordance with this standard and was built in Bern residential quarter Myeik (Meienegg), which was the largest in the city’s draft residential development in the postwar period. Architects of the project had partners Hans and Gret Reinhard (Reinhard Hans und Gret), their goal was to build a bright and more or less spacious apartments for the working class. Since about 70 years have passed, housing standards and the needs of the people during this time changed dramatically.

In particular, the accommodation of parents with children in the same room is no longer considered the acceptable norm. “The value of the apartments no longer meet the expectations of tenants,” said Walter Straub (Straub Walter), Executive Director of partnership of owners of housing “Fambau Genossenschaft”. In addition, the changed standards and construction and engineering standards related to the needs of people with reduced mobility (wheelchair users), fire safety and seismic resistance.

On the other hand, the examination carried out by an independent organization, showed that rehabilitation and reconstruction (Novomoskovsk jargon — renovation) existing 273 apartments would be too expensive and unprofitable. “We are left with only one option, namely, socially oriented replacement construction, involving the demolition of old housing and replace it with modern housing standards,” says V. Straub. The partnership “Fambau” comes from the fact that the implementation of this project will require investments in the amount of from 100 to 120 million francs/dollars.

As part of a new construction project it is planned to create 350 modern apartments distributed in several buildings. Residential buildings will be two or three floors higher than now, that is an average it will be 5-7 story buildings, some, very few, will reach 10 storeys. As shown by examination, conducted by the engineers of the Zurich higher technical school (ETH), this project allows, without prejudice to the Berne harmonious urban environment to increase available living space by 25%, which in absolute terms is equivalent to 7 thousand square meters of housing.

Demolition of buildings and construction of new homes will be conducted in three stages, so that people living in homes slated for demolition will have enough time in order to find equivalent housing in the same area of the cash housing, which is owned by the partnership “Fambau”. The new apartments will be sold virtually at cost in the format of social housing. Specifically, 3-room apartment will cost from 1 400 to 1 500 francs. francs per month (no communal) that is about 72-75 thousand Russian rubles.

This will mean a relative increase in the average rent, however, V. Straub comes from the fact that no social conflict here will not arise. “The portfolio of our homeowners have enough budget apartments for socially vulnerable categories of tenants.”

To ask people? And how!

But first needs to develop a detailed plan of renovation of quarter Myeik, which will be put to a local referendum. Without the consent of the people in Switzerland, as we know, none of the public is an important project cannot be implemented. The first version of such a plan should be developed by the end of 2017. “If all goes according to plan, the vote of the people on this project will have the latest at the beginning of 2020. Construction work could begin in 2021”.

Of course, the biggest problem will be the objections of organizations and structures dealing with the protection of monuments. In the Building Registry of the city of Bern and Canton this quarter although not have the status of “monument”, but still equipped with the heading “worth saving” (“erhaltenswert”). In addition, the quarter Meienegg appears in the Federal List (“Bundesinventar”) of objects under state protection as an object deserving “special attention”. Recently in Bern was finally offered to transfer him to the category of monuments is invalid for demolition.

However, on the eve, according to the head of the Main Department of monument protection of the city of Bern, Jean-Daniel gross (Jean-Daniel Gross), the Parliament of the Canton as a whole had decided for financial reasons to reduce the list of protected monuments. Therefore, to make such a move failed. His Department, however, intends to once again raise the issue and arrange another independent examination, which would definitively answer the question of whether quarter Myeik to enter into the list of monuments protected from demolition by the status of “historically valuable example of urban development”

War of the examinations?

“Federal List” of protected objects for us is not critical”, — said V. Straub. According to him, the recently adopted “vision of urban development and environment of Bern” (“Stadtentwicklungskonzept” — “Stek-2016”) for the quarter were rated as “area with high development potential”. As for the objections of local leaders in the field of protection of monuments, in the opinion of V. Straub, they objected because “they have such a profession. We ourselves also conducted appropriate independent expertise, and they came to the conclusion that the really strong arguments against the demolition of the quarter does not exist in nature”.

District Commission for capital construction and urban development of the Bernese district of Bumpliz-Bethlehem (Quartierkommission Bümpliz-Bethlehem — QBB) does not yet have information about the details of the planned renovation project, but the Chairman of the Commission Albisetti Bernardo (Bernardo Albisetti) acknowledges that “this quarter, most of the construction substance has long been in need of substantial rehabilitation, or even complete replacement. In the Western part of Bern in General, this problem in General is the biggest and urgent issue. It is clear that the decision will be taken in each house separately, but the protection of monuments should not stand in the way of thinking about how and in what direction should develop the city” — sums up Boris Albisetti.