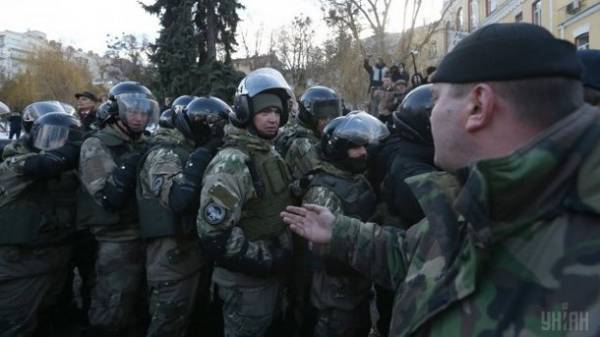 In clashes in the city center wounded at least 10 people, according to red cross volunteers.

“There is information on 10 patients, including 1 with closed cherepno-a brain trauma and 1 core”, – noted the doctors in the comments Gromadske.sa.

In addition, during clashes in Central Kiev beat the people’s Deputy Yegor Sobolev. About the MP said on the page in Facebook.

Broadcast “Gromadske.sa” Sobolev said that tried to stop a fight between protesters and police.

At the same time “Gromadske.Yua” reports that the Sobolev force was used against a police officer.

Meanwhile, the situation on the stock on the anniversary of the revolution of Dignity in the center of Kiev has stabilized, clashes between protesters and police are currently there.

In the clashes of protesters on European square with the police, seriously injured a police officer.