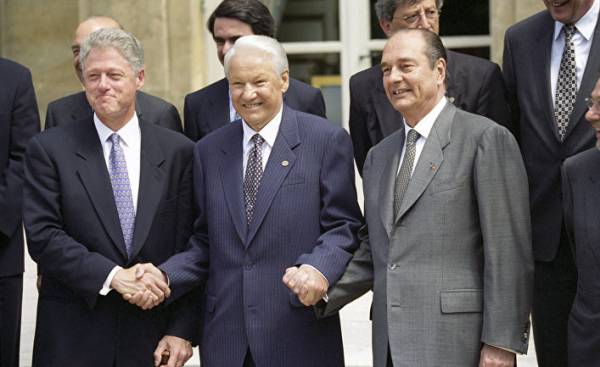 The first 100 days of the presidency of Donald trump become very difficult. His party controlled both houses of Congress, but he has failed to push through vital legislation. Attempts to solve the problems of immigration and the health system turned into a lot of problems. Many government posts remained empty, and around those people who took key positions, there was a lot of controversy. Family members of the President received the right to participate in political decisions that angered critics, who considered it ridiculous and outrageous — as if the White house suddenly turned into a family business venture.

Described above characterizes the first 100 days of the presidency of Donald trump. However, it is worth Recalling that all this also characterized the first 100 days of the presidency of bill Clinton. During the first 100 days, Clinton has faced the fact that his bill on economic incentives was rejected by the Senate. In addition, the Senate rejected both candidates for attorney General, proposed by the Clinton — Zoe Baird (Zoe Baird) and Kimba wood (Kimba Wood) — after it became clear that they used the services of illegal immigrants who worked as their nanny. Unlike trump, Clinton managed to put the missile strikes on Syria by the end of the first 100 days of his presidency, but his third candidate for the position of attorney General in the end who took this post — Janet Reno (Janet Reno) directed the siege by the FBI belonged to members of the religious sect “Branch of David” ranch in Waco, Texas, which killed more than 70 people. In 1993, terrorism and the war in the middle East was a problem, which had to cope with the new President: U.S. has provided no-fly zone in Iraq, and Islamist radicals bombed the world trade center in February. Meanwhile, Clinton appointed his wife to head a working group responsible for reform of the American health care system.

Perhaps Donald trump is the most extraordinary President in the history of the country, but it is hardly the first President whose first 100 days in office could be characterized by more of a problem, not triumph. However, compared with bill Clinton deserves special attention. Clinton, like trump, during his election campaign spoke as a populist, and because of that he won a victory over Bush. And while today’s Democrats prefer not to think about it, during his election campaign Clinton promised to begin the hard fight against crime and did not hesitate to racial topics. However, the most important similarity trump and Clinton is that they both came into power at the end of the old era and the beginning of a new one. Clinton became the first truly postojannym President after the end of the cold war. And trump is the first President of era, which does not yet have its name and which can be roughly described as post-postorna.

Like trump, Clinton tried to change the rules in Washington. First steps of Clinton was pretty radical, and some of his boldest initiatives was presented to Congress and the public that is within the first 100 days. He wanted to end the ban on homosexual service in the armed forces. The working group of his wife, engaged in health care reform, spoke in support of universal access to medical care. He continued to make questions about gun control and the right to abortion in the program of the Congress that eventually turned into the adoption of the Law on free access to clinics (Freedom of Access to Clinic Entrances) and a ban on assault weapons, enacted in 1994. He took a decidedly left the course in social issues and at the same time began to withdraw his party from its traditional economic settings. One outcome of this approach was the North American free trade agreement. In foreign policy Clinton from the very beginning made a mistake: his Secretary of defense Les Espin (Les Aspin) have worked on this post a little over a year, and then resigned (partly due to severe casualties in the battle in Mogadishu, which happened nine months after Clinton came to power).

Despite the fact that the success of Clinton to the end of the first 100 days of presidency were modest, he demonstrated his determination to change his own party and Washington. However, the biggest change was the fact that he could not expect: in November 1994, the Democrats lost control of the House of representatives for the first time in 40 years. Clinton appointed to the Supreme court only progressives, but after the capture of Congress by Republicans, his administration was guided rather by the principles of neo-liberalism — as it is now called — the its social program. Key terms of the Clinton steel globalization and “new economy”.

After the first 100 days of presidency, trump often still acts like a populist, which he was during the election campaign. In the White house strategists and advisers, adhering to the principles of economic nationalism and restrictive immigration and conservative social programs. During his election campaign, trump has consistently advocated, as opposed to Clinton, as a man ready to fight against waves of globalization. But in one respect — as shown by the first 100 days — administration of the tramp is not so much the opposite of the Clinton administration, as his double: like Clinton, trump depends on wall Street, notably from Goldman Sachs. After the defeat of the Democrats in Congress in 1994, Clinton became known for its ideological “triangulation”, although the basis of this tactic were laid long ago. Many supporters of trump’s already afraid that their candidate after only three months became softer attitude towards Washington. How he will react if — and it is quite possible Republicans will be defeated in Congress, a year after his election? The tramp has always been a centrist elements of DNA, as well as a penchant for fast change of positions. When will come the year 2019, will replace Steve Bannon (Steve Bannon) some David Gergen (David Gergen)?

In the period of the last year’s election campaign, trump was much more right than he may have expected. The reign of Clinton was a disaster for a long time undermined the position of the American middle class and deprived US of the strategic benefits that they have gained over the years of the cold war. George W. Bush has only exacerbated the consequences of the mistakes of his predecessor, Barack Obama has been too soft to bring “change” that he promised. That is why now the US President was trump, and that’s why Bernie Sanders (Bernie Sanders) is the most popular politician in America.

However, to win the election, or in the struggle for popularity is not the same that govern. The task of any who come to Washington and everything in it to change, is to not give in to those difficulties that necessarily arise because of inexperience, and to learn from the political experience of the former elite, not starting to think like them. It is unlikely someone will be able to tame trump, but his administration cannot say the same. It may be a bit shifted to the center and, nevertheless, to remain true to its mission populist mission, which Trump and his team has instructed his constituents. However, it is necessary to develop a centrist populist position and maybe even use the elements of left populism. The most appropriate way for the current administration is the path that was Clinton, that is, the path that led him from progressivism and populism to globalism and who can lead the administration of the tramp from right-wing populism in the same direction.

After 100 days the White house of the President of trump is still an experiment, like many of the administration at this stage of their work. While we are not talking about some important dates and milestones — a significant milestone is not the end of the hundred-day period, and Congressional elections. Until then the administration will have to decide if they want to abandon the program of Clinton or to repeat it.