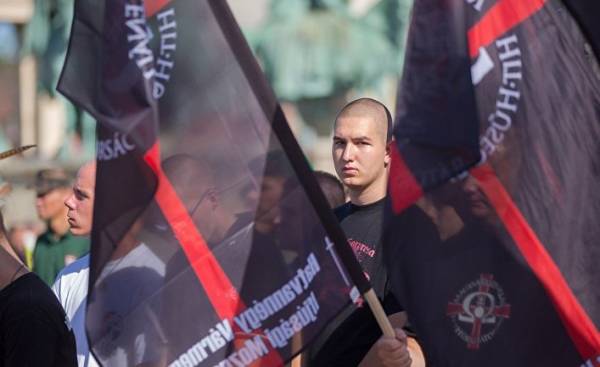 They in any case will not support military action against Russia and other Slavic Nations, stated that “the Czechoslovak reservists against the planned NATO-led war” when creating their organization in 2015. We are talking about one of several armed Pro-Russian organizations that have cropped up in the Czech Republic after the Crimean crisis of 2014. Similar phenomena can be found in all Central European countries, as evidenced by the analysis of the independent Hungarian research Institute Political Capital, which was also attended by newspaper DER STANDARD.

Published today, the analysis compares how gain weight faithful to the Kremlin’s movements in Poland, Hungary, the Czech Republic, Slovakia and Austria. Paramilitary organizations such as the above-mentioned “Soldiers against the war NATO”, can be found, for example, in the Czech Republic, Hungary and Slovakia. Slovak proextreme fighting, for example, on the side of the separatists in Eastern Ukraine, notes the analysis. In addition, in 2012 he founded the group “Slovak military service”, whose members received military training under the leadership of former soldiers of the Russian special unit Spetsnaz. “Our goal is Novorossiya and the recognition of the independent republics of Donetsk”, — told reporters one former member of this group.

To resume a boundary dispute

Common to such organizations, which cooperate with Moscow, is that they put forward territorial claims to other countries. The aim of Russian strategy of influence is the use of “bitter memories of past border disputes,” reads the analysis. One example of this is Hungary, where right-wing extremist groups want to return to the Hungarian government “lost region” — the Transcarpathian region, today in the Ukraine, and Transylvania, today in Romania. Such demands put forward, for example, extreme right-wing Jobbik organization, as well as her youth organization “64 Gespanschaften” (HVIM) during a demonstration in front of the Embassy of Ukraine in Budapest in the summer of 2014.

It becomes apparent that such extremist groups have influence also in the social and political sphere. According to the analysis, their messages are spread in all countries “a powerful Pro-Russian network mass media”, for example, the channels of RT (formerly Russia Today) and Sputnik, where there are also German-speaking program. As the newspaper DER STANDARD reported in the summer of 2016, at RT was regularly made by members of the extreme right-wing identitylogo movement of Austria.

Alexander Markovich (Alexander Markovics), a former chief and current head of the “Working group theory”, met repeatedly with the neo-fascist Russian ideologue Alexander Dugin. “The situation in Russia is definitely a positive patriotism is prevalent throughout society, support for young families, the struggle against Islamic terrorism, as well as performance for a multipolar world”, — said Markovic last autumn in one interview, which was conducted by the Political Capital for analysis. Rumors that identitary received financial support from Russia or Eastern Europe, are, according to Markovic, “the Empire of lies”.

The Austrian freedom party has also become the largest Austrian opposition party, which stands with the Pro-Russian positions. In December last year, her delegation signed a cooperation agreement for a period of five years with the Russian government party “United Russia”. It specifically says that the two parties undertake “to educate youth in the spirit of patriotism and hard work”. In addition, there is a regular exchange of visits between the two parties.

Close contacts between politicians APS and Russia or Russia-friendly countries for many years. Vice-President for the fpö Johann Gudenus (Johann Gudenus) was, for example, the Executive Director of one company which had a subsidiary in Russia. For questions about this business Gudenus did not answer, despite repeated requests. Together with other politicians APS Gudenus participated in the so-called missions of election observers in the encirclement of Russia — for example, during the referendum in the Crimea.

In mid-April, the Deputy of the Vienna Parliament from APS Wolfgang Jung (Wolfgang Jung) and the former head of land organization in Carinthia, Gerhard Doerfler (Gerhard Dörfler) visited the crisis area of the Mountainous Karabakh to monitor the referendum. About this region I bet Armenia and Azerbaijan. “The invitation came from the local Parliament. Were observers from many European countries and from South America,” said Jung in an interview with the newspaper DER STANDARD.

“It is enough to catch only a couple of people”

A similar observation of the elections of national politicians exist throughout Central Europe. Against Polish politician Mateusz Piskorski (Mateusz Piskorski) is conducted in the present investigation, in particular because the organization of such missions. A former Polish politician who was allegedly recruited Piskorski, said in an interview with newsweek.pl how that works: “Piskorski opened his calendar, which was filled to the brim with dates of meetings: in the Caucasus, the former Soviet Union, or Africa. He said:”You can come with us, anytime. You only need to catch a couple of people, if possible, former parliamentary deputies or town councillors.” Each of these missions Piskorski had a budget of 200 thousand euros.

Loyal to the Kremlin heads of state

However, the heads of state behave in a Pro-Russian Czech President Milos Zeman of the Czech Republic (Miloš Zeman), according to the analysis, “openly welcomed” the annexation of the Crimea, “what is not ventured by any other governing political figure, any member state of the EU.”

Also in Hungary the authors of the analysis noted the “Pro-Russian geopolitical turn,” Prime Minister Viktor Orban (Viktor Orbán). Different is the situation in Poland, which as the only one studied the state has a border with Russia. With the exception of Piskorski, in Poland there is hardly any Pro-Russian figures. Michal Katsevich (Michael Kacewicz), a journalist from “Newsweek,” and Wenerski Lukasz (Lukasz Wenerski) from the Institute of public Affairs, which focused on the analysis of Poland, see, however, adapted to these circumstances the Russian strategy that want to stir up negative sentiment against the Polish neighbours.

The goal of Russian strategy in Central and Eastern Europe is, according to the analysis, “undermining the stability of the region in General and especially bilateral relations with Ukraine.” This activity is supported, in particular, and the oligarchs, for example, ultraprofessional billionaire Konstantin Malofeev. He organized in Vienna in June 2014 — the day of the so-called “life Ball” — a meeting between the chief of the fpö, Heinz-Christian strache (Heinz-Christian Strache), a young politician from the National front and the niece Le Pen, Marion Marechal-Le Pen (Marion Maréchal-Le Pen) and the Russian politicians and ideologists such as Dugin.

The authors of the analysis require such “a clear Russian attempt to change the political landscape in the countries concerned” was openly discussed in diplomatic negotiations. It also requires the investigation of the origin of the cash flows in such organizations, and creating institutions that would prevent disinformation campaigns: for example, France created the centre of the defence. Slovak police is engaged in search of the twelve new experts to work against the “Russian disinformation”. In Austria such events are not yet scheduled.

Tuck: As such trade with the “L/DNR” does not exist