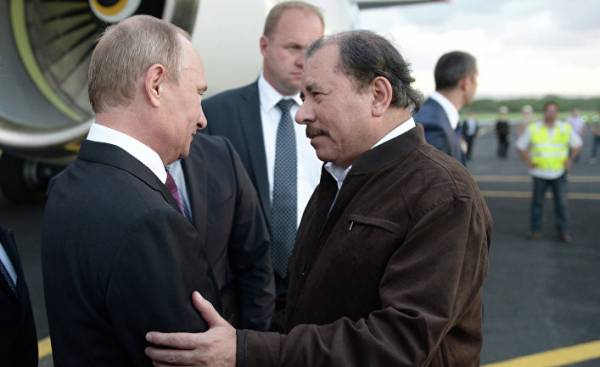 In the past year Venezuela has reduced deliveries of crude oil to Cuba, her old ally started to turn off the electricity in public institutions and close refineries. Then Havana appealed for help to his old friend, Russia. In early may, the Kremlin sent a tanker with fuel, which this Communist island will last for three months. It was the first in many years, the supply received by Cuba from its former benefactor and patron. But this is not the only sign that Russia is returning to the region that it is practically abandoned to their fate after the cold war. Moscow builds a tracking station for satellites in Managua, and was thinking of reopening military bases of the Soviet era in this region. And she is expanding economic ties and provides assistance to the countries of Central America and the Caribbean. President Vladimir Putin even offered to restore the Capitol building in Havana, which is strikingly similar to its Washington counterpart.

“Thus the Russian saying gringo, “Careful, we might come back into your backyard”,” says Jorge Pinon (Jorge Piñon), working Director, energy program Latin America and the Caribbean at the University of Texas at Austin. It is estimated that the cost of Russian fuel supplies to Cuba is more than $ 100 million. “Or is it a long-term strategic commitment, and this is the first step towards a significant investment in the region,” he adds.

China is also increasing its presence in the Caribbean. Chinese companies and the government since 2012, has invested in the region of six billion dollars, according to estimates by the American enterprise Institute. The interests of Beijing, not limited to the economy. He wants to convince the Dominican Republic and 10 other countries in the region to break off diplomatic relations with a hostile Taiwan in an attempt to stop the enemy’s actions to strengthen its position on the world stage. People’s Republic of China considers Taiwan part of its territory, pursuing the policy of “one China”. Beijing and Taipei for many years are fighting for diplomatic alliances with other countries, promising them cheap loans and direct assistance. But in 2007, when Costa Rica switched from Taiwan to China, the two countries entered a period of détente and rapprochement. The situation could change with the election to the presidency of Taiwan independence supporters Cai Inveni, which in November after arrival on a post of the President call Donald trump. After that phone call, Beijing convinced the tiny island nation of Africa Sao Tome and Principe to break off relations with Taiwan. Cai in January rushed back to Central America, visiting there three countries to strengthen relations with them.

A senior diplomat from one Caribbean nation, who wished to remain unnamed, believes that the increasing Chinese investment in the next year or two there will be new countries that will break with Taiwan in favor of strengthening ties with China. “You’ll see — these countries flocks would fly away from Taiwan,” he said.

Even before trump gave the signal for reducing the global role of the United States under the policy of “America first”, China and Russia, using its size and resources, have started to win over small and poor countries, generously promising them aid, military support and investment in almost everything from stadiums for cricket and ending with the channel through the territory of Nicaragua. “Russia and China recognize the geopolitical importance of this region because of its proximity to the United States, says a Professor of Latin American studies Evan Ellis (Evan Ellis), working in the strategic studies Institute U.S. army war College in Carlisle, Pennsylvania. The difference is that China wants to increase its economic presence, acting very gently, and Russian, in contrast, want to use their presence as a provocation”.

In earlier times, such encroachments would instantaneously cause a hostile reaction from the United States. But after the end of the cold war, Washington turned away from the Western hemisphere, giving the opportunity to gain a foothold there to China and Russia than they did not fail to take advantage, said a senior researcher at the Washington-based Brookings institution Richard Feinberg (Richard Feinberg). “If you take the example of China, he believes the United States is disorganized, facing inwards country and himself well-organized government that is able to form a long-term vision for the region by gradually building up its influence, he notes. And I can even see how it is tempting for Putin to approve Russia as a regional power. He welcomes any opportunity to strengthen Russian positions in the Caribbean”.

Russian Ambassador to Guyana Nikolay Smirnov did not agree with the idea that Russia is trying to provoke the United States. On the contrary, he emphasizes the opportunities for cooperation between Russia and countries of the region in such areas as climate change, trade and the fight against drug trafficking. “In the foreign policy of modern Russia all countries, both small and large, have the opportunity to participate in economic and political partnerships, says Smirnov. — Our position is to not interfere in relations between other countries not to compete with the interests of others.”

The United States remains the dominant economic force in Central America and the Caribbean. According to figures the census Bureau of the United States in the past year, the bilateral trade volume there amounted to about $ 80 billion. They are investing in this region is the largest foreign direct investment-which in 2015 reached 18 billion dollars. It is reported by the UN Economic Commission for Latin America and the Caribbean (ECLAC). But in the proposed trump project budget provides for nearly a 40 percent reduction in aid to Central American countries, as evidenced by data analysis of the non-governmental organization Washington office on Latin America (Washington Office on Latin America).

Meanwhile, Russia provides assistance to the small Islands of the Caribbean, and forgave Cuba’s debt to $ 32 billion. The Chinese are investing their money in building hotels in Barbados and power in Haiti. Jamaica, which last year opened a toll road with a cost of 730 million dollars under the name “Chinese highway”, a Chinese-financed infrastructure projects as a key way to pull the country from years of economic decline, as evidenced by the employee of the government Agency Jamaica Promotions Corp. Anelia Nelson (Anelia Nelson).

In April, the head of southern command Admiral of the U.S. Navy Todd Kurt (Kurt Tidd) told Congress that his concern was used by China in the region’s soft power and increasingly active operations of the Russian military. “Even seemingly beneficial activities can be used to strengthen a hostile influence,” the Admiral said.

Look at Nicaragua, whose President Daniel Ortega called Putin’s hermano (brother). When two years ago the two countries agreed to expand military ties, Russia began to berth their warships in Nicaraguan ports and to put in this Central American country tanks, planes and weapons. Now she completes the station to follow navigation satellites. Is this station near the American Embassy, and this has raised suspicions that it can be used to spy on the US and its partners.

Despite the apparently comfortable relationship between trump and Putin, the new administration has resisted Russia. Signed in early may by President bill forbids the U.S. to Fund some of the countries that recognized independence of the breakaway States South Ossetia and Abkhazia, which in 2008 fought on the side of Russia against neighboring Georgia. Among these States Nicaragua. But Republican Senator Ted Cruz co-sponsored a bill called the “law on investment conditions in Nicaragua”, which States that countries seeking loans from international financial institutions, must first hold free and fair elections, and then to promote democracy.