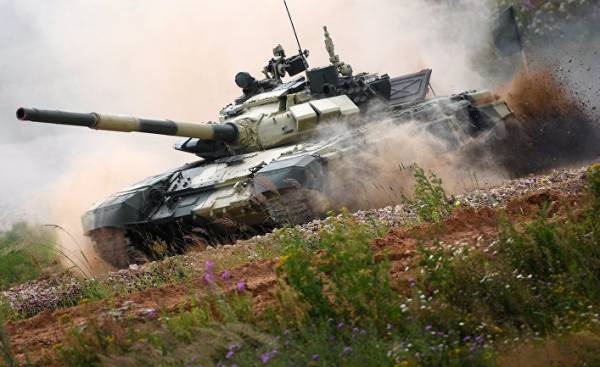 Overgrown with Ivan-tea field, you can hear the gun shots. The audience shouts “Hooray” when the team of Laos hits the target.

At the suburban landfill Alabino held the competitions in biathlon tank. They go to the international games held by the Ministry of defense of Russia. They are called in the military Olympics.

Tank duels are satisfied and in Western countries. But in Russia, this event turned into a family show.

The games are attended by 28 countries, and the competition tanks are just one of nearly 30 kinds of competitions. In addition to spectacular tank and air of the competition, soldiers will demonstrate their skills including cooking in a field kitchen.

The opening games in the Pacific were attended by thousands of spectators. Boris, who came here with his wife and son, said the idea of beautiful. His wife Daria speaks of a sense of patriotism.

“It’s nice to see the capacity and the military power of Russia,” she says.

The ambition of the Minister

According to Russian military expert Pavel Felgenhauer, Military games are the brainchild of defense Minister Sergei Shoigu. Shoigu understands the need for publicity.

“He thinks it’s a great PR. Like it or not, I don’t know,” says Felgenhauer.

One example of action Shoigu in the field of publicity is to create in the Moscow region the Park “Patriot”, the opening took place Army games.

Shoigu differs from many other Ministers, he is indeed a politician. Other Felgengauer calls by technocrats and bureaucrats.

“For them important good relations with Putin, but they did not care what people think about them people,” he said.

Shoigu, on the contrary, there is political ambition, and he managed to create a good reputation.

“Maybe he wants to someday become President of Russia, do not rule out this possibility. He does what brings him popularity. In the ranking of popularity, he is in second place after Putin. The rest are far behind,” says the expert.

Felgengauer believes that the war games will refuse as soon as Shoigu will leave his post.

Among the participants there is only one NATO country Greece, even though the invitations were sent out to others. On the first day of games in the competition was attended by Laos, Tajikistan, Uganda and Angola.

According to the Ministry of defence of Finland, the country received an invitation in February this year, but Finland refused.

The first games were held in 2015. Felgengauer believes that they could take part and the Western countries, if the seizure of Crimea is not cooled the relationship. According to him, the original goal of the games was to contribute to improving relations between the armed forces of different countries.

“Before the seizure of the Crimea, representatives of the armed forces of Western countries told me that they are going to participate in the Games,” he says.

According to Felgenhauer, from a technical point of view, the competition doesn’t make much sense, because they are mostly Russian technology. To compare the equipment of different countries is impossible.

China, Belarus and India brought their tanks, but only China machine — completely of its own production. Belarusians modified T-72 tanks, from the Indian — Russian T-90.