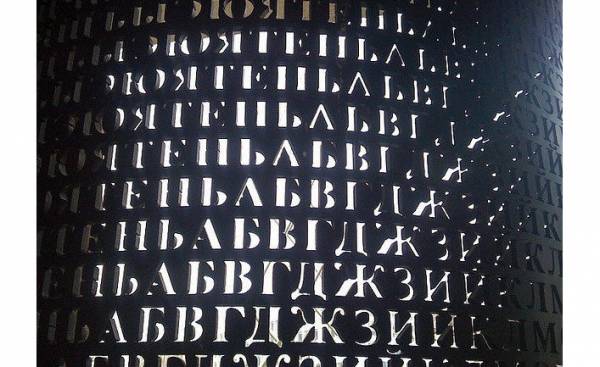 The recent statement of the President of Kazakhstan Nursultan Nazarbayev on the transition to the Latin alphabet by 2025 has caused a new wave of political debate on the topic of language in this country. Talk of transferring the Kazakh language to the Latin alphabet are from the 1990-ies, and in 2012 the project was declared as long-term goals. Kazakhstan in this area follows the example of Turkmenistan and Azerbaijan, where the transition to the Latin alphabet was held for the most part successfully, and also Uzbekistan where, despite 20 years of efforts of the authorities, the process was not finished and adapted to the needs of the Uzbek language, the Cyrillic alphabet continues to be used.

Kazakhstan is actively discussed what we should do and what price will be given to this project, separating the new generation from the huge literary heritage in the Kazakh language gained since the transition to Cyrillic in 1940.

Justification of transition to the Latin alphabet is the statement that this alphabet more “modern”and better meet the technical needs. It is also noted that Latin neutral from the cultural point of view. But many observers believe this step is an attempt to detach Kazakhstan from the Soviet and Russian heritage. So the question is from the Kazakh nationalist community.

In Russia, the proposed reform was called hostile, anti-Russian step which will lead to increased emigration of ethnic Russians from Kazakhstan. Thus, although the reform does not affect Russian language (which many Western media seem unable to understand), it is, however, again raises the question of the status and role of Russian in Kazakhstan today.

In 1989, after decades of decline and marginalization, Kazakh was declared the state language of Kazakhstan. But Russian retained the status of official “language of interethnic communication”. Throughout the 1990s controversy raged about the extent to which it is to revive the use of Kazakh in government institutions and the education system.

Then, according to the 1997 law, for Kazakh was designated as the only national language of the country. But in practice, Russian has retained its position in public institutions, as well as the most common lingua Franca in the cities and the dominant language in the media. In the larger cities in the North of the country, Russian is often the native language even for ethnic Kazakhs.

But knowledge of Kazakh is now a requirement for admission to the civil service, and in-country efforts are being made to raise the status and level of teaching of the Kazakh language.

According to a 2009 census, 99 per cent of ethnic Kazakhs and 74% of the population stated that they understand spoken Kazakh. Although it is possible that some respondents embellished their linguistic abilities, there is reason to believe that the indicators of proficiency in Kazakh has increased significantly. It is noteworthy that whereas in 1989, only 0.9% of ethnic Russians said about the knowledge of the Kazakh, by 2009 this figure had soared to 25%.

At the same time in 2009, 94% of Kazakhstan residents, including 92 per cent of ethnic Kazakhs, said that they understand the Russian language, which is much higher than in 1989 when this figure stood at 64%.

It is therefore obvious that the performance of the Kazakh language proficiency over the last 20 years has grown significantly, but it was not to the detriment of the Russian language.

Despite this objective evidence, relevant to the question of language in Kazakhstan is based on the principle that if one language wins the other definitely will damage. In addition, the Russian, Western and even some Kazakh media are of the opinion that the reduction in the share of ethnic Russians in the population will lead to a reduction in the use of the Russian language in Kazakhstan. Few people realize that the borders of the Russian-speaking world do not necessarily coincide with the political and ethnic frontiers “Russian-ness”. Also, few recognize that the possession of two languages is a positive aspect and advantage of contributing to cultural enrichment, not a threat to national unity or the source of the oppression of national minorities. Understanding these nuances could help to leave behind sow discord, disputes over status of Russian language, flaming now not only in Kazakhstan but also in other post-Soviet States, especially Ukraine.

Scientists involved in the study of what we now call “literature in English” long ago abandoned the idea that the English language is the exclusive domain of England or the British state is obliged to protect the English-speaking population around the world. This is not surprising, given the dominant position of English as an international language and the number of English-speaking countries. It should be noted that 70 years ago in India was a debate about the role of English is very similar to those that now take place in Kazakhstan regarding the Russian.

In India’s case, the bills on making Hindi the only official language has led to protests and even cases of self-immolation in the South of the country. Eventually, the temporary status of English as the state language became permanent, and the ownership of English has become one of the key competitive advantages of India in the world economy. In addition, writing in English Indian authors have made a significant contribution to world literature.

Although some native languages of the peoples of India the present state of Affairs is not entirely to their liking, many realize that the English considered a foreign element and a relic of the colonial past would be an excessive simplification. English in India has become a native local language: now they own 12% of the population, far more than in the days when India was a colony. The French language has acquired a similar status in West Africa and the Maghreb, where they are also now owns a greater number of people than before gaining the States of these regions of independence. Researchers are now talking about French, not French literature. The post-colonial era, these countries had experienced a literary boom in both languages. And just as the English language literature would be greatly impoverished without the works of authors such as chinua achebe, Salman Rushdie and Arundhati Roy, French literature was enriched by works yasmin Hadri and Tahara Ben Jelloun.

In Kazakhstan and in Ukraine, the Russian language plays a much more important role than the British in India or the French in Africa, because here for a much larger share of the population Russian is the native language. In addition, Russian has a long history as the language of literature for the Kazakh and Ukrainian authors, and not only for those who consider themselves Russian. Moreover, Russian as native in Kazakhstan, say representatives of major Diaspora, mostly descendants of peoples deported under Stalin — the Germans, poles, Chechens and Koreans, as well as approximately 30-40% of ethnic Kazakhs. This indicates that people who speak Russian as a mother, probably still make up the majority of Kazakhstan’s population, although many of them now have mastered the Kazakh and speak two languages.

The influence of the Russian language reflected in media, literature, and overall culture. Kazakhstan’s realities are reflected in the works of Russian literature of the Soviet period, in particular in the “Keeper of antiquities”Yury Dombrovsky, where the action takes place in Alma-ATA, 1930-ies. Probably the most famous Kazakh poet Olzhas Suleimenov, during perestroika, the former is the initiator and leader of the popular movement “Nevada-Semipalatinsk”, which was the cessation of nuclear testing in Kazakhstan, writes exclusively in Russian, and in some of his works talks about what it’s like, when Russian is the native language of another ethnic group.

Recently I attended literary readings of works by poets Anuar Duisenbekova and Kanat Omar. Both of them write in Russian, although Kazakh theme and interspersed with the Kazakh language. Creating a modern Russian writers are Rollan Seisenbayev, Duisenbek of Nakipov, Paul Bannikov, author and Director Ermek Tursunov, and many others. In the Almaty Open literary school, and in 2015, leading the literary magazine “New world”devoted a whole issue of Kazakhstan works in the Russian language. In the University competitions of poetry in three languages — English, Russian and Kazakh — and the large number of works served that in Russian, as the most powerful source of inspiration and literary ideal is, perhaps, Sergei Yesenin.

I heard students in my veins there is no drop of Russian blood, and who grew up in Shymkent and Taraz, the Kazakh village in the South of the country ardently and sincerely spoke about how they love the works of Bulgakov, Turgenev and Pushkin. For them, these works are as much a part of their cultural heritage as if they grew up in St. Petersburg. However, this does not prevent them to pay tribute to the giants of Kazakh literature, such as Abai and Auezov. Similarly, 60 years ago Nirad chaudhri and C. L. R. James was able to write about his love for English literature, and what they think of Dickens and Thackeray with their authors, while at the same time fighting the British colonialism in Bengal and on the island of Trinidad.

Russian is fully one of the languages of Kazakhstan. Kazakhs are part of a Russian-language literature, and in the Central Asian country has formed its own special Russian culture. In Soviet times it was common, and one of the most prominent creative figures of non-Russian origin, including, for example, Fazil Iskander, preferred to write it in Russian.

Therefore, there is reason to speak about Russian-speaking world, extending far beyond the borders of the Russian Federation, and the representatives of this world do not have identificeret with Russia or are Russian by ethnicity.

Russia has declared its right to defend the interests of Russian and Russian-speaking population outside its borders. In the case of the Baltic States where Russian is not recognized as an official language, and Russian-speaking part of the population are denied the right to a nationality, people have a reasonable grievance. At the same time, Russia, questioning the sovereignty and the language policy in Kazakhstan (where Russian is an official language) and in Ukraine (where he is recognized as a minority language), harms the people it is, according to its own statements, is trying to protect.

As noted by Volodymyr Kulyk in Ukraine, such a clumsy and aggressive actions to strengthen linguistic nationalists in their mistaken belief that Russian language is a foreign threat to the Kazakh or Ukrainian, and Russian-speaking population undermines the “purity of the nation”or even a fifth column. The result was counterproductive actions, like recently introduced in Ukraine the ban on the import of books from Russia or the requirements of the most aggressive wing of Kazakh nationalists to revive the Kazakh language and to limit the use of Russian.

If the language will continue to be a political instrument in the hands of both parties, such tensions will remain, and victims will be ordinary people who just want to speak the language in which I was raised. To relieve this tension we must recognize that outside of Russia have formed the Russian-speaking world, which culturally is English speaking, but in the political sphere does not necessarily follow in the Wake of the Russian Federation with its own literary heritage and particular Outlook.

Alexander Morrison is Professor of history at Nazarbayev University in Astana. He is also the author of the work “Russian rule in Samarkand 1868-1910. in a Comparison with British India”(Oxford, 2008). He is currently working on a historical book about the Russian conquest of Central Asia.