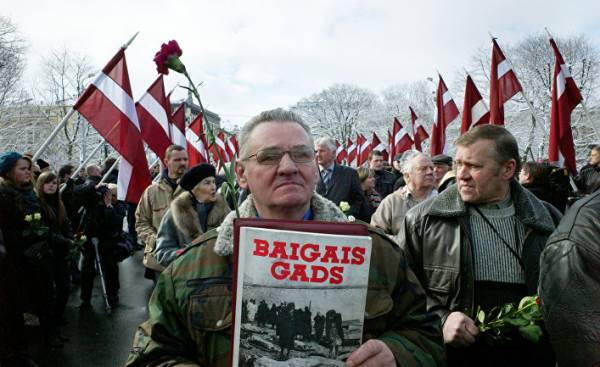 On March 16, the day of memory of the Latvian legionaries, traditionally opposed to 9 May, but this year will be the first time Latvians will attend the event in honor of the Soviet victory to protest against him.

The official position of the authorities of Riga neutral. Is freedom of speech — the right to organize the event. The only condition — the safety, namely: to hold opposite views people began to convince each other by physical methods.

Every year Russian picketing differently opposed to the procession on 16 March. Now Latvians can arrange something similar on the way to the monument to the liberators of Soviet Latvia and Riga from the German fascist invaders, but the scale will be smaller. The goal of the picket is to remind the society about the course of world war II on the territory of Latvia and the Latvian state caused the harm as a result of the Soviet occupation. The liberators did not leave.

The protest is organized by the Society of support of national soldiers, whose representative Ginta vilcane said that no provocations are planned. In the picket near the building of the National library, that is the way of those who will go to the event at the monument to Soviet soldiers who can take about 50 people. If you will meet more like-minded people, then it is good: “We must Express our attitude that what is happening may 9, is not quite valid”.

Every year, the scenario of the Russian Victory Day is the same: the glorification of the Russian Armed forces and the broadcast of the parade in Moscow, concerts in the Park at the monument merchants provide a festive meal for the participants of the celebration. Usually for a holiday come the ambassadors of Russia and other friendly States, as well as consistently — the mayor of Riga nil Ushakov addressed to the veterans with a speech of thanks. Usually he does this formally in his spare time. This year will be interpreted the mayor’s presence at the event in a part of the victory of the Soviet army, the press service of the Riga city Council until finds.

Celebration in Victory Park will last for two days. As has informed a press-the Secretary of the Executive Director of Riga city Council Ugis vidauskis, may 8, from 17 to 23 hours of the declared event in memory of the victims of the Second world war, in turn, may 9 during the day will be held a festive event in honor of Victory Day, which will end with fireworks at 23 hours. The application for the event was filed by the organization 9.majs.lv. It may the activity began in January: find out who of those who fought on the Soviet side alive, they held a fundraiser, brought money and gifts. This project supports the First Baltic channel. In turn, resources to ensure celebrations invests as the Russian Federation in the framework of the policy on compatriots and various private merchants, which, as noted in the last report of the security Police, is trying to obtain the best conditions for trade with Russia.

Celebrations in honor of Victory Day are held not only at the monument to Soviet soldiers. On 9 may the government declared an official procession in Riga from the corner of Kalnciema street and Slokas with the participation of 1,000 people. The applicants Margarita dragileva and Elizabeth Krivtsov, that the report of the security Police called the activists of the Russian policy on compatriots. The goal of the March is keeping the memory of those who fought against Nazi Germany.

The representative of the Riga city Council Ugis vidauskis has informed that permission for holding a public event in Victory Park is now in the review process. Applications for the rally and the March has not been considered. Executive Director Juris Radzevich awaits the conclusion of the security agencies. In principle, the government can not prohibit these activities, but may adjust their conduct in accordance with the recommendations of the police.