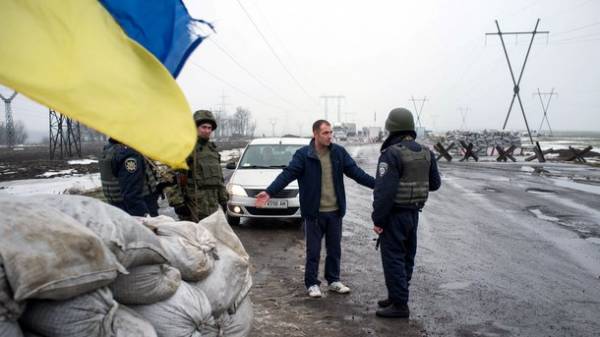 The main theme of this week blockade of Donbass. However, its context and content has changed dramatically: if earlier the main thing was the confrontation between the authorities and radicals, had organized the blocking of Railways, now at the fore the conflict between the Ukrainian government and the separatist “republics”.

The turning point was the decision of the audience in the environment of the Council of national security and defense, which was declared as a national blockade of all transport routes in the Donbas. According to the President of Petro Poroshenko, the essence of the blockade, declared by the Council, is fundamentally different from that waged by the radicals. “We say: bring back the Ukrainian enterprise owners regardless of whether the state is a form of ownership or not… Provide the first and second paragraphs of the Minsk agreements — the ceasefire and the withdrawal of heavy weaponry and artillery, and we remove the restrictive measures on the movement of goods through the line of collision,” said the President.

SANCTIONS AND STABILITY. Another question, which was gathered by the Council, sanctions “dochek” Russian banks that have recognized passports “DNI/LC”. Himself of the NSDC to take them did not, delegate to all the national Bank. Office Valeria Gontareva reacted quickly, making a list of suggestions that sound menacing, but not yet posing a real threat to the existence of “savings” and other subsidiary banks in Ukraine. According to experts, prohibitions on the distribution of profits and capital is not very relevant due to the lack of profit, and the prohibition of the return of inter-Bank credits — due to their absence. Really important may be the prohibition on withdrawal of capital, but only if Russian banks want to close their subsidiaries. Gontareva can understand — she has her own task, which consists in ensuring the stability of the hryvnia. The destruction of several banks from the top of the list is a threat to national currency. And because the NBU provides sanctions that will not break stability.

DOLLARS — ALMOST FREE. Recently the national Bank has demonstrated the results of this stability, making, perhaps, a decisive step towards liberalization of the currency market. The regulator said that the limit of the hryvnia, which you can buy dollars, will be increased from 12 to 150 thousand. The opportunity to buy from more than five thousand dollars, and even without the 2% tax, actually leaves without a job black market, where the amount in excess of five thousand was only a small part. Of course, even after the abolition of the black market will remain, but it will be mostly those exchanges that would have occurred even in the absence of restrictions. Just don’t all want to Shine a large amount.

REMEMBERED THE LANGUAGE. Unlike the NSDC and the national Bank, the Parliament this week has once again demonstrated that he does not exist in the reality in which he lives the rest of the country. On Wednesday, he actually worked for only eight minutes, and then the whole day coalition and “Samopomich” to figure out who brought to the session hall of the national guard and had if the Vice-speaker Rawfoodist to adjourn the meeting.

Before this, the deputies actively discussed the President’s initiative on deprivation of Ukrainian citizenship those who have the passport of some other country, but so to anything and did not come. And yesterday and all decided that the most urgent issue in the country is Ukrainian-language quotas on TV.

Accepted yesterday in the first reading the law Knyazhytskyy—Sumar negate the provisions of the law of Kivalov—Kolesnichenko, which gave TV stations the right to decide for themselves what and what language to show. The new law will oblige them 75% of news broadcasting in the Ukrainian language, but films made after 1991, there’s no show in any language other than the state.

Interestingly, an exception is made for one language — Crimean Tatar, in which you can show all without restrictions. And such exclusion certainly lead to international scandals, as it divides the minority in the privileged and the oppressed.

EUROVISION: RUSSIAN QUESTION. Another scandal in the humanitarian sphere erupted around Eurovision. On Monday, Russia called their representative to this contest — Julia Samoylova. Immediately it became known that the singer in 2015 visited the annexed Crimea and the SBU demanded a ban on entry for her.
However, the ban on the entry of the participant of the Eurovision song contest itself will be a scandal, but here it is compounded by the fact that Samoilov confined to a wheelchair. And such a ban will hit the international image of the country. Therefore, the SBU took a pause to “study the issue” and is likely just going to spend it on the brakes.

THE MEMORANDUM AND THE REALITY. Last week was published a Memorandum signed by the government and the IMF. However, not officially published, but the text has not been refuted. And it contains all what is already said, pension reform, land market and monetization of subsidies.

The adoption of many of the prescribed standards will inevitably lead to growth of protest moods in the society. Therefore, it is unclear how and what parts of the Memorandum are going to implement.

BEZVIZ: THE TERMS NAMED. Finally, the week was clearly the designated time, when Ukraine will receive a visa-free regime with Europe. Last Thursday the relevant Committee of the European Parliament adopted a decision on approval decisions on Ukraine, after which it became known that the European Parliament will vote on the question on 5 or 6 April. And there will be only one final vote of the EU Council, which will take place in may. And bizviz promise in June.