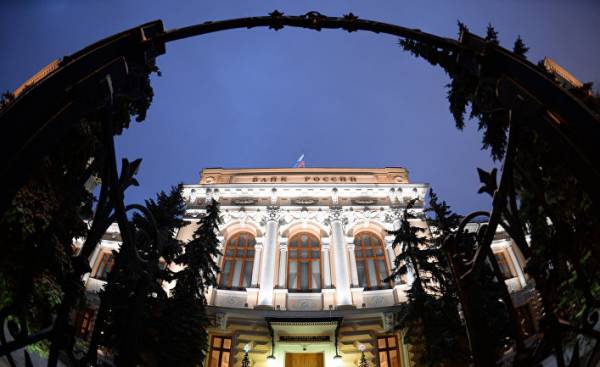 For the economy successfully emerged from recession, news about investments in Russia are becoming more and more grim.

Until a broader recovery is gaining momentum, capital expenditure companies in 2017 suffered after the reduction of the last three years. According to rough estimates, published last week, a proxy for the investment — the cost of completed construction works — declining for the fourth month in a row, which is the highest decline in this year.

The reduction contrasts sharply with the confidence of the Central Bank that “the long pause in investment” behind. Investments in fixed capital increased by 1% in the first quarter compared to the previous year, the General conclusion on the basis of nine estimates in the Bloomberg survey. Statistics service, which in 2016 is beginning to produce the quarterly investment should publish data for January-March next month.

“Despite the significant reduction of uncertainty, investment growth is constrained by several factors,” said Dmitry Kulikov, senior analyst Russian rating company ACRA. Among them “a relatively high level of risk perception after the recession, the accumulated arrears in Bank loans and a weaker rouble than in the pre-crisis period.”

Once investments were the basis for the government’s efforts to overcome the crisis, but now they are stalled, as the economy continues to suffer from corruption, weak institutions and poor business climate. After assessing the property rights and the prevalence of foreign ownership Russia has been below the 120-th place among 138 countries in the global competitiveness report of the world economic forum.

President Vladimir Putin found such results are inadequate and last week was asked to develop additional measures to promote investment. Few days ago, Prime Minister Dmitry Medvedev said that his office discussing tax breaks for companies planning to increase capital spending. The economy Ministry has proposed a program of subsidizing interest rates on long-term loans that can be issued by the state lender Vnesheconombank, according to the newspaper “Vedomosti”

“The government finally drew attention to the issue of investment and modernization, — said Vladimir Tikhomirov, chief economist at BCS Financial Group, Moscow broker. — This is clearly a positive and welcome step which, if successful, could lead to a significant acceleration in growth in Russia.”

Judging by the results of construction this year, companies needed more help. Volumes in the industry, which accounts for about 40% of the total capital expenditure decreased by 4.3% in the last quarter, “which had a negative impact on quarterly investment in fixed capital”, — said Dmitry Polevoy, economist at ING Groep NV in Moscow.

“Investments continue to be determined by expectations of lower interest rates on loans in future quarters and uncertainty regarding the configuration of the tax system,” say analysts at VTB Capital, including Alexander Isakov.

Although the Central Bank has maintained its “moderately tight” policy, the cost of credit in Russia continues to decline. The average rate on corporate ruble loans for a period up to 12 months in February made up 11.48%, compared to 13% a year earlier and almost 20% in January 2015.

Bloomberg surveyed 32 economists: according to most of them, the Central Bank will reduce its key rate by another quarter point at its meeting on Friday. In March he completed a six-month break, reducing the rate from 10% to 9.75%.

The head of the Bank of Russia Elvira Nabiullina has already stated that it “may discuss rate cut of 25-50 basis points”. After the “overall” review of the state of the economy in the March data, increases the likelihood of deeper monetary stimulus, according to Bank of America Corp.

“The pace of improvement is disappointing, it can put pressure on the Central Bank and lead to more aggressive easing policy” this week, said Vladimir Osakovsky, economist at BofA in Moscow. “We believe that this can increase the probability of a rate cut by more than 50 basis points”.