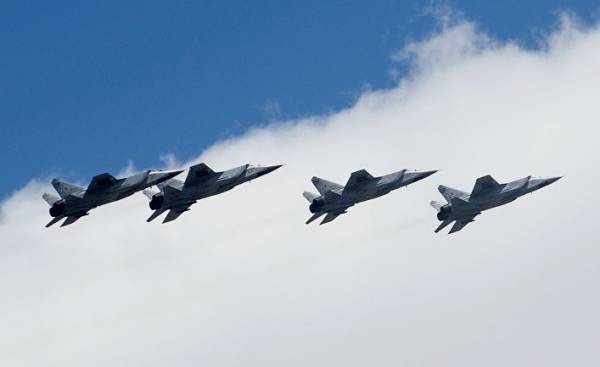 To defend its vast airspace, Russia is using a formidable and fast fighter-interceptor long-range MiG-31. However, although Moscow continues to modernize these honored aircraft, capable of speeds of Mach 2.83, they are not made already since 1994.

Of course, the Russian Navy MiG-31 is likely to be able to serve till 2030 years, but sooner or later the Kremlin will need to replace it. Indeed, the Russian authorities today to Finance preliminary work on creation of new combat aircraft, tentatively named the MiG-41.

“Development of the replacement for the MiG-31 is discussed and some preliminary design work is underway, but so far everything is in very early stages,” said The National Interest the military expert of the Russian Higher school of Economics Vasily Kashin.

MiG-41 is a completely separate project that does not overlap with the fighter to gain air superiority T-50 PAK FA, developed by “Sukhoi design Bureau”. In this case, rather, is the so-called sixth generation fighter, similar projects such as Penetrating Counter Air United States air force, F/A-XX, or the US Navy Next Generation Air Dominance.

“As I understand it, the MiG-41 is a project with the future in mind, in stages, from conceptual studies — emphasizes Kashin. In my opinion, it is something like 5++ or sixth generation. Therefore, likely to treat it should be how to the American, European and Chinese projects of the sixth generation — that is, as something futuristic, able to go into service, in the best case, in 2035-2040 years.”

The MiG-41 will be developed after the finalization of PAK FA, so the new interceptor will not compete for resources with the project “Sukhoi”. “I don’t see any conflict, because, even if the MiG-41 will reach the stage of a test flight, it will not happen before the mid 2020-ies,” says Kashin.

Many doubt that Russia has enough resources to create such a plane. “I think it’s more like a paper project under the motto: “Let’s draw, and there may be money there”,” said The National Interest, a source in the defense industry.

Russia needs a long-range interceptor to replace MiG-31, because it has a very large territory. Even having lost a fair portion of the Soviet land Russia occupies a huge space. While she has bases in many areas are few, and the distances between them very large. “Russia because of its geography needs to be far interceptor. So to save the MiG-31 as long as possible, and then to find a replacement is a good idea,” says Kashin.

Whether to build a Russian MiG-41, can show only time. Of course, Moscow needs this plane, and she seriously expects to create it. The question is whether the Russian resources to implement such ambitious project.