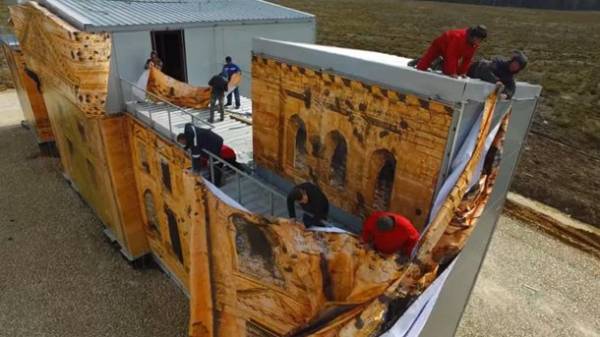 In the Park “Patriot” in Kubinka (Russia) at the weekend was indicative of the storm “copies” of the Berlin Reichstag.

Design, which was to remind the building of the German Parliament, was built of metal containers, plywood and film with the image of the Reichstag.

According to the Minister of defence of Russia Sergey Shoigu, the event was “to remind the present generations, neighbors near and far Russia on the feat of our fathers and grandfathers.” In Germany the storming of the “Reichstag” in the suburbs was considered a sign of the growing estrangement between Russia and Germany and called “strange and inappropriate” idea.

Thus, according to rumors, the event spent about 20 billion rubles.
Social media users have ridiculed the Russian assault on the “Reichstag”, noting the absurdity of the idea.

You won’t believe, but that is Kung Fury Россииpic.twitter.com/RYNxNm9ofi

We will build a copy of the Reichstag, they said pic.twitter.com/HFSSVTWA2c

PHOTOFACT! People of wool are storming the Reichstag out of plywood: pic.twitter.com/Qk0UWswzsA

Here is a “copy of the Reichstag” from the Ministry of defence. pic.twitter.com/8p0pkARqQg

I thought that the Reichstag took the beetles, and it turns out – Shoigu. The Reichstag, Carl!

Saw what they built a replica of the Reichstag?
From the same will of the Crimean bridge!

While the DPRK has threatened the US and Australia with a nuclear strike. The Russians took the Reichstag and Shoigu accepted the surrender of Berlin. Checkmate, NATO.

Very fun to storm the Reichstag cardboard with red flags. It is unclear why it is not dealing with the paintball club, and the whole defense.

Tuvan pathetic plagiatchika. Stole the idea with the storming of the Reichstag Ramzan Kadyrov. There is still in 2015 the Reichstag took.https://t.co/8OZ3awRm8z

Russia has banned Witnesses Iegovy and kartonniy stormed the Reichstag

presented a wooden model of the Reichstag, and in this lolita Milyavskaya dressed as Hitler

In the Park “Patriot” in Moscow, the reconstruction of the storming of the Reichstag. pic.twitter.com/KTL3UzFcZt

Putin took the country with the atomic bomb, and leave with a plywood Reichstag and cock shit

Near Moscow today trained to take the Reichstag. Jokes aside, I would still somehow tried to tell them Hitler had died.

Federal program “Copy of the Reichstag in every yard” pic.twitter.com/FDekMZQNQW

The essesovtsa surprised that an eagle with only one head pic.twitter.com/zMQN14hBsj