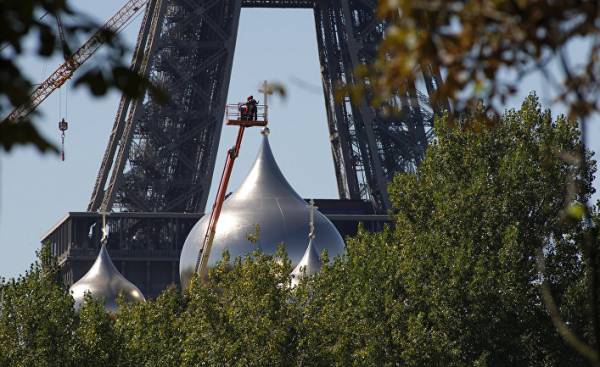 Never in the history of the fifth Republic, the election campaign has not been so unpredictable, with such high number of undecided citizens. Never about Russia so much talked about during the presidential race in France. Elena Gabrielian figured out how are going to vote for French with Russian roots, whose ancestors a hundred years ago emigrated after the 1917 revolution.

About the Russian voice, which is not

The descendants of “white” immigrants were born French. Accurate data about them is not. Talking about a few tens of thousands of people. One can hardly speak of a single voice of the Russian community in the context of the upcoming elections. “There are different currents. It’s like Russia in miniature,” says 57-year-old Daniel Struve. He represents the third generation of the famous emigrant family. His ancestors settled in France after the revolution of 1917. At least vote it will be “like a Frenchman”, but explains that the genetic memory of the Russian migrants sometimes makes itself felt.

“It played a role in the political consciousness. For example, many immigrants from the first wave of migration did not vote for the Communists, even their allies. But it ended with the collapse of the Soviet Union”, — says Daniel Struve.

Now among the descendants of Russian immigrants vote for the right and left. Here the same range of sentiments as in French society as a whole. The main reason for this trend, Deputy Chairman of the coordination Council of compatriots Mikhail Grabar calls assimilation, especially the younger generation. Another reason for the lack of a unified voice of the Russian community Mikhail Grabar calls the split. There have been attempts through the coordinating Council to unite around 200 associations, but not all wished to join it, considering the structure too close to the official policy of Russia.

Some organizations were “the victims”, said the head of the Orthodox Church on the street Longchamp in nice 71-year-old Alex Obolensky.

A few years ago, the French court of the Russian authorities made the transition of St. Nicholas Cathedral in nice in the bosom of the Russian Orthodox Church. Now trying to sue the local community, the Church of Saints Nicholas and Alexandra, as well as cemetery Kokad, which is almost 90 years old are the responsibility of the Association ACOR-Nice.

“We, the local government has not considered the community. We are trying to awaken the public opinion in nice around the acute question of our property and claims on the part of Russia. We remind you that participate in the elections, local politics, but no one listens,” says the Church elder.

Alexei Obolensky is sure that the decision to transfer the Cathedral in nice, the Russian Orthodox Church was political: “When françois Fillon was Prime Minister, he, along with Sarkozy actively worked to meet the request of Medvedev and Putin. The current government in France is configured a little differently, but it will soon be gone…”

Amid disputes over property community in nice, the mayor of the Orthodox Church without enthusiasm saw the arrival in Paris of the new Russian spiritual and cultural center on the Quai Branly. The decision on its construction too was made with Nicolas Sarkozy.

Parisian Daniel Struve believes that Russia needs to maintain their culture in a neutral manner, creating a secular centers. The politicization of relations of the Russian community with a Russian off-putting. This approach Daniel Struve calls short-sighted and, in General, the policy of Moscow calls “is designed for a momentary effect.”

“Russia has its problems, it needs to deal with them, to learn to protect their national interests, not to act as a center of ideological influence,” — says Daniel Struve.

Philosopher Michael Grabar consider themselves the descendants of immigrants who “understand and support the foreign policy of Russia. “I think that people who are aging, become more Russian.

— More Pro-Putin, because they think historically.”

71-year-old Alex Obolensky with this statement does not agree. His “Russian history turned in a very strange and unpleasant way.” Characteristic are the events around the Crimea. In 2014, some of the descendants of the Russian emigration has signed a letter of solidarity “in support of the annexation of Crimea.”

With the Peninsula, Alexei Obolensky associated family history. There his father spent all the revolutionary years and even spoke in Tatar. To the South of France his ancestors moved because nice, reminiscent of the Crimea.

“We had a beautiful estate. But it not mean that “our Crimea”. There is in international relations rules. Russia broke them, and I can’t agree with it”, — says Alexei Obolensky.

In France three leading in polls presidential candidate — marine Le Pen, françois Fillon and Jean-Luc Mélenchon, directly or indirectly, in favour of the Russian Crimea, but if the last two still have questions about the legitimacy of the annexation of the Ukrainian Peninsula to Russia, the leader natsfronta the legitimacy of the referendum is not in doubt.

The position of each candidate in relation to Russia is an important selection criterion for Alexei Obolensky, if not one of the main. All three candidates are scaring him “lack a critical attitude to Putin.” Despite the fact that he had traditionally voted for the right, this election is going to vote for socialist Benoit Hamon, although some of its proposals considers tradeoptimum in life, and if there was a column “against all”, there he would put a tick.

Mikhail Grabar “there is a feeling that the socialists not only do not like Putin, but with Russia itself, at the time, as moderate right and extreme-right is better located to Russia.” Deputy Chairman of the coordination Council of compatriots said that included in the group of people “who would become advisers to the Fillon to Russia.” As part of the right of the electorate, Mikhail Grabar considers the nomination of 39-year-old Emmanuel Macron a special operation of the current authorities. He calls harassment and publications in the press on Fillon embezzlement of budget funds in favor of their own family. This is a serious blow to his popularity.

“We had high hopes to win Fillon, with which he connected and the lifting of sanctions against Russia. And now unpredictable situation,” says Mikhail Grabar.

The fact that his wife and children has received about one million euros for alleged bogus work does not bother Mikhail Grabar. Though presented Francois Fillon example of flawless policy, but still disgraced. Michael Grabar refers to the employment of family members, a common practice and such “negligence” of their candidate, he is ready to forgive.

“The French have a strong sense of family. Even the money is ridiculous compared to the real world of money. Nicolas Sarkozy is associated with the French billionaires… And Fillon — level provincial millionaire,” says Michael Grabar.

For Le Pen and against migration

According to the Deputy head of the coordination Council of compatriots, many of this organization will be to support françois Fillon, but there are supporters of marine Le Pen. In this environment, many openly advertise their sympathy to the leader natsfronta “not ashamed to be souverainiste”.

Contradiction in the fact that the descendants of the immigrants support a candidate who fundamentally opposes migration, he does not see. Michael Grabar explains that the white immigrants migration alert attitude towards migrants from North Africa, black Africa, the Muslims… “They do not identify yourself with this migration, I believe that they are Europeans, and that France is a European country that belongs to the Christian world.

— How to explain this ratio if the same Russia is a multinational country where many Muslims?

— This is a classic question, but in the Russian Empire, Muslims lived for centuries, for the most part they are an integrated… In Russia — it is possible because it is natural, but here it’s all the same flow, the invasion and there is a risk of replacing the civilization that Christians will be in the minority…”

About it repeatedly in his speeches said the far-right leader marine Le Pen. The sympathy of descendants of Russian emigrants to that candidate Daniel Struve explains is not “Russianness” of these French citizens, and not even clearly Pro-Russian position of marine Le Pen. Support for the French extreme candidates — a sign of crisis of values. “We in France, changes are difficult. We accept new late. In 68-m to year in France there was a sharp conflict. So now we have a growing tension in society,” notes Daniel Struve.

This stress on yourself as never before and feels the younger generation, disillusioned with politicians and the system, waiting may ‘ 68,

28-year-old Alex was born in France in the family of “white” immigrants. His grandfather was an officer in the Czar’s army and fled Russia during the revolution. “They don’t always end well,” says about revolution, a young engineer, so the way to change the situation in France, he wouldn’t.

Alex has long been one of the elections is skeptical and believes that politics has become a show, without a deep analysis and serious offers, so many citizens in these elections we have to vote on the principle of “and”. This approach is not for him, so he decided to protest in his own way: not to vote. Alex believes that if many followed his example, then policy can and understand that trust must be earned.