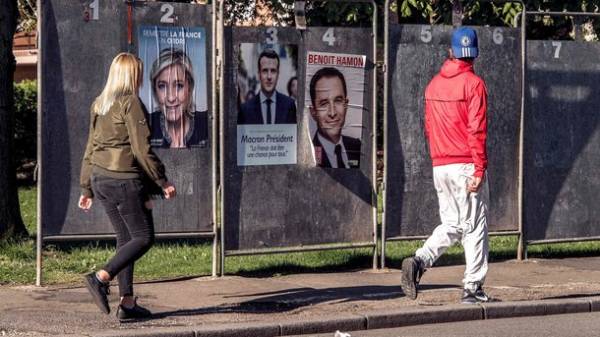 On Sunday, France will host the first round of presidential elections.

French media noted that the publication of any information about preliminary results of elections is prohibited until the closure of the last polling station in the country at 20:00 local time (21:00 Kiev time). For violation of this rule a penalty in the amount of 75 thousand euros.

In the first round of the presidential elections should be determined by two candidates who receive the highest number of votes. They come out in the second round and will continue to fight for the presidency.

Experts say that the outcome of the first round of the presidential elections is still uncertain, in particular because of the high percentage of doubters of voters. So, the results held for less than two weeks before the election the poll showed that a third of the French are still not decided for whom to vote in the election.

According to recent polls, the presidential race favorites remain four candidates – Emmanuel macron, M. Le Pen, françois Fillon, and J.-L. Mélenchon. However, in the month of April, the position of the candidate of the movement “Forward” and the leader of the far right, who was in the lead by a considerable margin in pre-election polls began to wane. In turn, the support rating of F. Fillon and J.-L. Mélenchon, on the contrary, has increased and thus they drew near to E. Macron and M. Le Pen.

However, two days before the first round of Emmanuel macron has kept leadership, testified survey data of the company Elabe. To support it was ready at that time 24% of the vote, whereas in support of M. Le Pen spoke of 21.5%.

The survey was conducted before the terrorist attack that occurred in Paris on April 20.

On Thursday night in a gunfight on the Champs Elysees killed one policeman, another injured. The gunman killed. Responsibility for the attack in Paris took the banned terrorist organization “Islamic state”.

In connection with these events, several candidates for the French presidency has decided to cancel all planned for Friday campaign events.

So, about the decision to end the campaign earlier than planned, declared françois Fillon, M. Le Pen, Emmanuel macron, who are considered real contenders to reach the second round of elections.

For its part, another leader of the presidential race J.-L. Mélenchon decided to cancel scheduled for Friday performances, explaining that “it is impossible to suspend our democratic processes. We must show that violence will not prevail over our Republic.”

A similar decision was taken and some of the candidates who, according to polls, have no real chance to win. Thus, in particular, did the socialist Benoit Hamon.

Friday was the final day when the candidates for President of France was allowed to conduct election campaigning before the first round of elections.

In France, there are about 45.6 million voters. About 1.3 million French people living abroad can also take part in the vote.

The second round of presidential elections scheduled for 7 may.