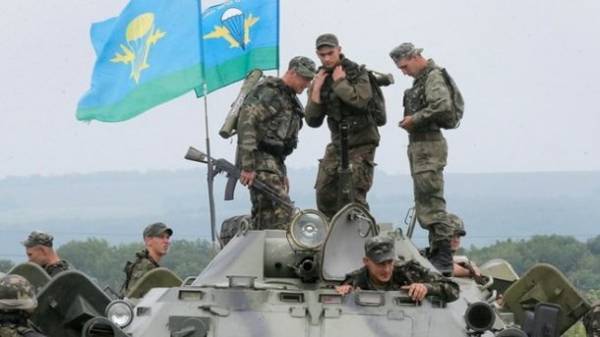 The Minister of defence in Facebook said that the Ukrainian paratroopers defending their homeland, committed in the Donbass, the longest RAID in the history of the modern world.

“The paratroopers! I congratulate you on the Day of highly mobile airborne troops of the Armed Forces of Ukraine! You are always and under all circumstances remain loyal to the Ukrainian people and the oath. Life motto “Nobody but us” clearly describes your power, willingness to come to where more and where can only you. Ukrainian Marines have repeatedly proven his heroism in a combat zone: defense of Luhansk and Donetsk airport, the longest RAID in the history of the modern world and many other stock the famous “winged infantry” will go down in recent history. You unconditionally and professionally bring the victory of Ukraine”, – wrote Poltorak.

In turn, Turchynov said that now airmobile brigade with honor confront the aggressor in the Donbas.

“Airborne troops – valour, fortitude, will to win, dedication to the oath and military brotherhood. The professionalism and bravery of the Ukrainian “winged infantrymen” who participate in international peacekeeping military operations, and is highly regarded throughout the world. Now airmobile brigade with honor confront the aggressor in the Donbass, one of the first to go into battle. To honor the memory of fallen heroes-paratroopers who gave their lives defending our country! Heroes-paratroopers, you thanks to his courage and heroism accelerates the victory of our state over the enemy,” – said the NSDC Secretary.

Also , President Poroshenko and Prime Minister Volodymyr Groysman congratulated the Armed forces of Ukraine with the Day of airborne troops.