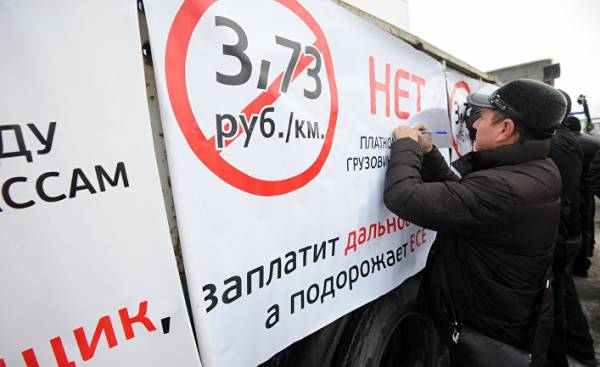 Russian truckers went on strike March 27. Their goal is to force the Russian government to abolish road tax (“Plato”), which, they claim, threatens their existence.

Russian truckers went on strike March 27. Their goal is to force the Russian government to abolish road tax (“Plato”), which, they claim, threatens their existence. Road tax in the amount of 1.53 rubles per kilometer (15 APR raised to 1.93 rubles) was introduced for trucks in November 2015 as a new source of government revenue. Theoretically, the additional income going to be spent on improving Federal roads, but the truckers believe that they disappear into the deep pockets of the Kremlin. During the introduction of the tax in 2015, the convoys blocked the traffic on the roads of Russia. They demanded the resignation of Prime Minister Medvedev and protested against the new tax (Commission 20%) charged associated with Putin, the oligarchs Rotenberg.

Irritability truckers because of the system “Platon” was in full swing since then as police broke up their strike on the outskirts of Moscow. The planned tax increase in two times 15 APR renewed the protest of truck drivers. (Moscow was counting on new revenues in the amount of 23 billion rubles for its limited budget). March 24, Medvedev tried to calm the truck drivers a more moderate increase in the amount of 25%, but this did not stop the strike. Because existing tax 1.53 RUB the already reduced profit margins to zero or into negative numbers.

As noted by an experienced observer Paul Goble, the Kremlin has banned the media to cover what has turned into a nationwide campaign workers, covering 80 Federal districts. The truckers ‘ strike threatens fragile economic recovery in Russia and is expected to increase consumer prices.

As in November 2015, the Western media largely ignored the first nationwide industrial strike that took place in key sectors of the Russian economy. The Putin administration’s confused. Unlike a one-day nationwide political demonstrations on 26 March, the strike of truck drivers (which started a day later) is a slow bleeding, which the Kremlin cannot stop. The truckers protest is not enough Central organization or leader who could be arrested (as, for example, Alexei Navalny into a political demonstration). This is not a political action, and, it seems, it is supported by local residents. The strikers are asking awkward questions about how to charge and what to spend road taxes. No demonstrations, only truckers with their big booths, congregating on the streets or in the Parking lots, they behaved well, cook on the grill and avoid alcohol. The police and riot police stand helplessly nearby. There are no leaders who can be arrested, and no violations of the order, which could be punished.

The participants of the strike argue that they do not have economic pressure that they ended the strike. According to their calculations, the new tax rate adopted by April 15, they will lose money by managing your business. In fact, they have nothing to lose if they continue the strike.

The participants one goal — the abolition of the tax. They came to the conclusion that simply stop working is their only option. In a normal society, they could form a Union to represent their interests, but Putin’s regime has destroyed society and conventional norms of behavior in society.

“Platonov” the strike is indicative of the battle between the Kremlin and the Russian working class. The truckers protest provides a model for the fight against the “monster” of the political system Putin that teaches ordinary Russians that the fight is useless. If the Kremlin will retreat and refuse to tax the Russian people can see that resistance can work.

Putin has suppressed political opposition through repression, possible murders, exclusion, and control over electoral commissions. Putin’s rating remains high, but people are already fed up with a corrupt system that he created. The difference one day between a national political demonstration against corruption and a nationwide strike by truckers could contribute to the merging of weak liberal forces with a strong national forces, which can become a threat to Putin’s regime. Taking on military commitments, Putin climbed into the pockets of ordinary workers and retirees to pay for their foreign enterprises, and the result was a movement against the road tax.