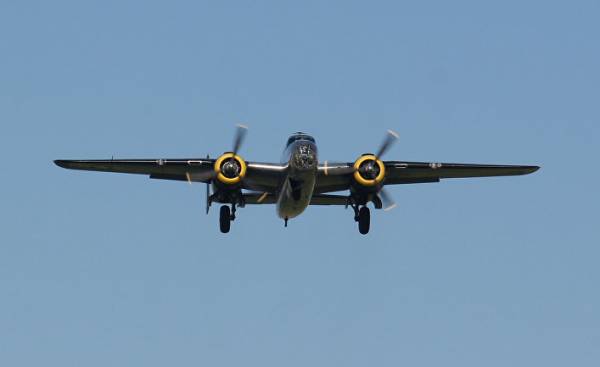 They were called the Doolittle raiders. The RAID was planned as retribution for the attack on pearl Harbor. It was a daring RAID, which involved brave volunteers who went to a one-way trip to bomb Tokyo, and then jump out with a parachute or to make a hard landing in China.

The group consisted of 16 modified b-25, each of which had his nickname, type “Whiskey Pete”, “Suck a duck”, “the Dancing dervish” or “Avenger.” The planes were loaded aboard the aircraft carrier USS “hornet”, and he went to the Pacific ocean deep behind enemy lines.

Before that, the crews never took off from the deck of this aircraft carrier. They were prepared in the Eglin airfield in Florida, where the runway was painted the outline of the carrier.

They had no fighter escort, and with modified b-25s took off the gun turrets to increase the bomb load and extra fuel tanks that increased their range is doubled to 2 400 miles. They practically flew unarmed deep into enemy territory, knowing full well that this is a one-way trip one-In-25 not yet landed on the deck of an aircraft carrier.

The Doolittle RAID conducted on Saturday 18 April 1942, was a brave and daring avenueto United States on the Japanese capital Tokyo and other targets on Honshu island. American pilots had for the first time in the Second world war to attack Japan.

Early morning RAID on the Japanese patrol boat spotted the USS hornet, in connection with which the departure was decided to launch 10 hours earlier and 200 miles farther from Tokyo. Doolittle in his b-25 first flew from the deck of the ship, then climbed the remaining 15 airplanes, starting a long six-hour flight to the target.

Bombers appeared in the skies over Japan on 18 April afternoon and successfully bombed 10 military and industrial targets in Tokyo, two in Yokohama and one each in Yokosuka, Nagoya, Kobe, and Osaka. Although some b-25s came across a loose barrage of air defense and enemy fighters or one bomber was shot down.

After bombardment, the raiders flew in a South-westerly direction from the Japanese coast, in the Eastern China. (One b-25, which left almost no fuel, headed toward the Soviet Union, not to fall in the middle of the East China sea.)

During the flight to China, the pilots faced a number of complex and unforeseen difficulties. Night was coming and were running out of fuel, and the weather deteriorated rapidly. The pilots realized that is unlikely to make it to the intended for planting airfields in China. They had either to jump with a parachute in Eastern China, or to make an emergency landing on the Chinese coast.

Miraculously all 15 aircraft flew to the coast of China. After 13 exhausting hours of flight or the pilots made an emergency landing or bailed out. The sixteenth b-25 flew to the Soviet Union, where the plane was confiscated and the crew interned.

Most managed to fly to China pilots were rescued by Chinese civilians and soldiers. Of the 16 aircraft that participated in the RAID, every one of them either made a hard landing, or were left jumped with his parachute by the crew and crashed.

Despite the loss of 15 trucks, 69 pilots escaped captivity and death, and only three were killed in battle. Eight airmen were captured. Three of them were executed later by the Japanese, and one died while in captivity. The other four after the Japanese surrender were released and returned home.

Planned and led the RAID, James Doolittle, President Roosevelt awarded the Medal of Honor and promoted him to the rank by one notch to Brigadier General. All 80 raiders received the Cross of the “distinguished flying”, and killed and wounded was awarded the medal “Purple heart”. Two pilots received the order of the Silver star for the fact that China helped to escape Japanese captivity wounded comrades.

The RAID demonstrated that Japan is vulnerable to American airstrikes. It was a retaliation for the Japanese attack on pearl Harbor and seriously raised the morale of Americans. America first suffered fighting on enemy territory, and in the center of it.

In the 75th anniversary of this fearless RAID heroic airmen will be remembered and honored for their courage and willingness to sacrifice. This RAID was a turning point in the course of world war II in the Pacific and ultimately led to the defeat of Japan.

May peace be in the world, the pilots-heroes!