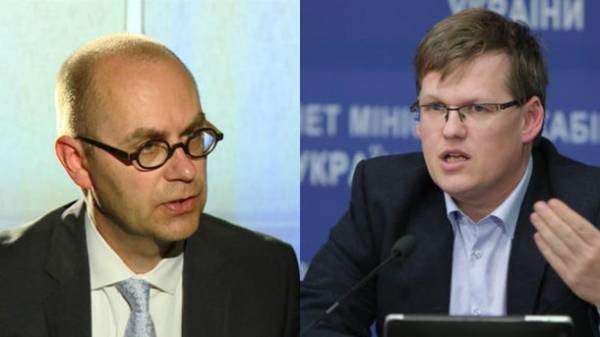 Vice-Prime Minister Pavlo Rozenko believes unprofessional statements by the head of mission of the International monetary Fund (IMF) in Ukraine, Ron van Roden timing of the introduction in our country the pension system.

As coalsales, Ron van Roden in the article to “Economic truth,” said today that Ukraine should not go to a funded pension system allegedly due to confusion in the solidarity system.

Because of this Rozenko on his page in Facebook called Rodin the layman. Then Deputy Prime Minister explained his position in a commentary Today.

“We need to clearly understand the law. I called these statements are unprofessional, because he did not understand the essence of our legislation. The essence of the legislation is that the solidarity system in the normal pension of Ukraine should take 60%, 30% is a cumulative system, a 10% non-state pension insurance. And what would we do in the solidarity system, it’s still only 60%, Ukrainians, even in comparison with the European countries. And as the joint system does not depend on the existence or nonexistence of a funded system and private pension funds. These systems operate in parallel – they do not overlap, they are independent of each other.” – said Rozenko.

He recalled that for 14 years the thesis that a funded system should wait interfere with the Ukrainians to get a decent pension.

“They (these theses – Ed.) senseless and wrong in fact, because these two systems are parallel. … Of course, in General it is necessary to restore order – and we will work within the Memorandum with the IMF, with the IMF representatives. But then again, I would not like to see pension reform in Ukraine stopped due to the fact that once again raised the same questions on the retirement age,” – said Rozenko.

Recall Rozenko also said “Today” that van Roden was wrong, considering that Ukraine still uses the Soviet pension model. According to the Ukrainian Vice Premier, with this system the country was done in 2000.