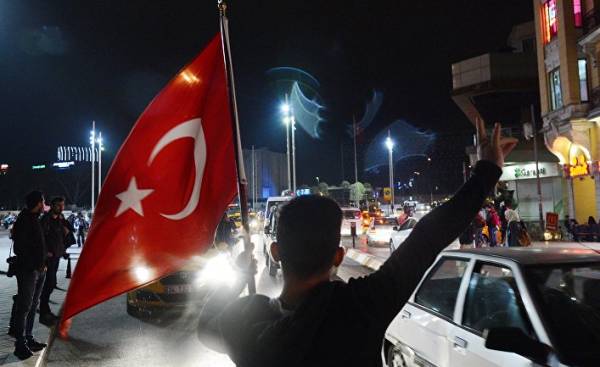 The votes cast on the constitutional referendum in Turkey, it is estimated. By a narrow margin (51% against 48%) defeated supporters of President Recep Tayyip Erdogan. Turkey is a presidential government. In the world, especially in Europe, the political changes in Turkey called undemocratic. But is it really?

First of all, we must recognize that the process is in compliance with all statutory procedures of Turkey and are quite affordable. Would a less democratic Turkey? The question is, what is meant by democracy. In the aftermath of the referendum, Turkey will be similar to the United States of America, where a popularly elected President is also the head of government. But none of this accuses the US, is that they are undemocratic government.

So why is Europe concerned? There are several reasons, and they are mainly to be found in the person of Erdogan. The current President of Turkey is quite unpredictable, not too friendly towards Europe politician. In that case, if changes in Turkey initiated another, more convenient for European policies is likely no criticism we would not have heard. Turkey is now the accused that the process of integration into the European Union was grinding to a halt. But in reality, Europe itself has not figured out whether she wants to see in his family is huge (81 million people!) Muslim state, which, moreover, gradually drifts in the direction of conservative Islam.

Another reproach: Turkey has resumed talks (just talks!) about the possible restoration of the death penalty, which completely cut off the country’s path to Europe. However, not audible to Brussels ever criticized US in practice there is the use of the death penalty.

Europe also afraid of the possible resumption of the flow of Syrian refugees to the Islands of Greece, and domestic instability in Turkey. The results of the referendum clearly demonstrated that the state is divided not only politically, but also on a territorial and national basis. Initiated against Erdogan’s reforms voted by a large, partially Western cities — Istanbul, Izmir and Ankara, all the Mediterranean coast, and supported her conservative Central regions and Black sea coast. Against the reform of voting is also inhabited by Kurds of the South-East of the country.

Another thing that annoys many neighbors of Turkey is Erdogan’s statements on the restoration of the power of the former Ottoman Empire. It, at least until involves the expansion of political, economic, ideological and cultural influence of Turkey. It is unlikely that such a Turkey might try to Annex the territory of neighboring countries (for example, the crumbling of Syria) physically the same way as Russia did with the Crimea.

However, it is undeniable that Turkey’s influence in the region from year to year increases. Another confirmation of this trend can be considered the statement of the President of Kazakhstan Nursultan Nazarbaev last week about translating the alphabet of the Kazakh language from Cyrillic to Latin letters. This caused a huge storm in the Russian media, there were complaints about the departure of Kazakhstan from the “Russian world”. But, it seems that reform of the Kazakh alphabet should have been implemented a long time ago along with Azerbaijan, Uzbekistan and Turkmenistan. The point here is not ideology or politics. Any linguist will tell you that for Turkic languages, which also include the Kazakh, Latin alphabet like better than Slavic Cyrillic, and ornate Arabic writing. However, at least for Erdogan referred to the decision of Kazakhstan is another indication of the strength and influence of Turkey.