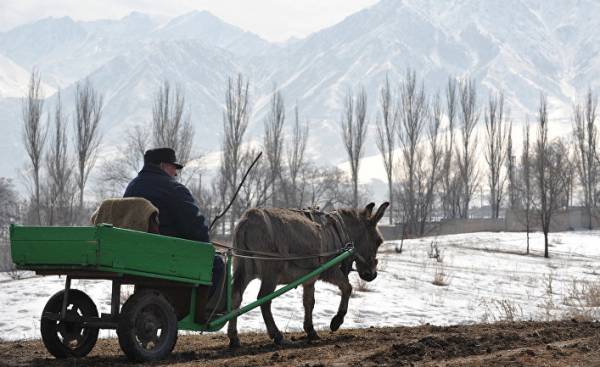 Being on the southern border of Kazakhstan realize that was on the verge of a very different world after moving to Kyrgyzstan — journey into the frozen reality. On the way to cross the frozen steppe, sweeping outside the window, a collective taxi, carrying us from the administrative center of Zhambyl region of Kazakhstan on the border with Kyrgyzstan.

Monotonous landscape beyond the window breaks some abandoned factory, occasionally come across the streetlights, it seems, you need only to indicate the boundaries of the road. Along the border there is a narrow pedestrian crossing, photography here in order not to alert the police, almost shocked that you have to put the seal on a Western passport. When the road goes up almost immediately after the first move appears impressive dimensions of the dam, next to dominates the image of Lenin, a huge sculptural relief, a symbol of the Soviet period.

It’s not old memories: the influence of Russia is quite true, specifically, as in the whole of this part of Central Asia, part of the CIS.

Influential gas giant “Gazprom” is preparing to implement investments in the Kyrgyz gas transmission network: at the last meeting in Bishkek, Russian President Vladimir Putin and his Kyrgyz counterpart Almazbek Atambayev in the status of trade relations between the Eurasian giant and the country that is not landlocked, has changed.

Russian energy giant a few weeks ago announced plans to invest 100 billion rubles in the gas network of Kyrgyzstan, so that its coverage will increase from current 22% to 60% of the whole territory of the country. Cooperation policy contributes to the participation of Kyrgyzstan in the Eurasian economic Union, an international organization, which unites Russia, Kazakhstan, Armenia and Belarus. Last year, Russia supplied Kyrgyzstan million tons of oil without customs duties. The number of resettlement of Kyrgyz living in Russia to their home country increased by 17%, equivalent to almost a third of the state budget the Central Asian country.

Eurasian development Bank (EDB) signed an agreement with Kyrgyzstan to Finance hydroelectric power project Kambarata on the Naryn river. Thus, a country devoid of natural resources, such as oil and gas, which is rich in its neighbors Kazakhstan and Uzbekistan, relies on hydropower to gain energy independence and to be able to export electricity to China and neighbouring countries.

Modern geopolitics is far from a Great game, as it was called the diplomatic conflict of the 19th century, two great empires, Russia and Britain, continuously being in a state of military and diplomatic readiness for the conquest of territories and areas of influence in these remote regions of Central Asia.

However, overcoming the crossings and covered with lake ice melting under the first spring sun, seems to again see the descriptions of risky expeditions from notes Peter Hopkirk (Peter Hopkirk). On these unpaved roads fall first Kyrgyz agglomerates, under the open sky see the little tents, with clay predominating, a bit further, all sorts of Chinese stuff, and in more privileged places is the stalls, made from containers used for the carriage of goods in merchant ships.

It’s a small world, where there is peace away from crazy centers recruitment of fanatical terrorists and “mad dogs” of Jihad.

“Behave diplomatically and pose for the camera”: in the courtyard of the foreign Ministry settled the wild duck