I am skeptical about European political tradition. And I, like many others, are much more skeptical about the reality of the European Union. We perceive it as an element of separation of the West and the rest “European” civilization. This reality distinguishes latent, and often openly blatant anti-Americanism. Today (and in the future will be even worse) it is a nightmare (while monstrously corrupt), based on bureaucracy and regulation, it runs counter to a tradition based on law and freedom, i.e. the liberal tradition of the Anglo-American world. So wrote Robert conquest (Robert Conquest), the eminent specialist on the Soviet Union, in New York Review of Books 11 March 2000. The last book Andrew S. Markowitz (Andrei S. Markovits), “Why Europe dislikes America” confirms the rating conquest. In addition, Hannah Arendt (Hannah Arendt) in 1954 called European anti-Americanism is an integral part of European identity.

“New world” has surpassed “old” and anti-Americanism, wrote Arendt, was a result of the new based on hate “ISM” in the European dictionary. Markowitz divides the old unmatched analysis Arendt, claiming that “hostility to America today only became more vulgar, more clearly. It became a factor uniting the people of Western Europe more than any political positions, with the exception of a common hostility toward Israel.”

Anti-Americanism has become for Europeans, lingua Franca, especially after the intervention of America in the middle East during George W. Bush. But what is more surprising, and sometimes even neprilichnye, is that European anti-Americanism has changed after September 11, even before the decision of Bush to invade the middle East and the overthrow of Saddam Hussein. In short, in these circumstances, despite the evidence of the extreme severity of the incident, the anti-Americanism of Europeans like broke out in a conscious, and often unconscious expression of satisfaction with what happened with “uncle Sam”.

However, as evidenced by the analysis of Markowitz, as well as a long tradition of research on this issue, the anti-American sentiments are rooted in the very moment when the American revolution created a new nation, and this nation took the first bold (and therefore annoying Europeans) steps in international Eurocentric political system. This is offensive to Europeans audacity resulted in their impatience, frustration and even hatred against the Americans, rude, ignorant, pretentious, unbearable people. In fact, says Markowitz, America was born from the rib of Europe, but it is too early escaped from the care of his old mother. So, anti-Americanism took its existing form: “It is the attitude and negative attitude was determined not only (and primarily) the fact that the United States does, but rather the prejudice of the Europeans against America in their own understanding.” That is, in the end, this rejection, which is based on the existential nature, in its context, the term “Americanization” takes on a negative connotation meaning. In a rather interesting part of his book, Markowitz considers a few “anti-Americanism/anti-Semitism.”

Markowitz said that his attention to anti-Semitism is closely linked to anti-American sentiment as “cruel hostility toward Israel can only be understood in close relation to the anti-Americanism and hostility to the United States.” Similarly, anti-Semitism and hostility to Israeli policy linked to each other and even lead to the rejection of Israel’s existence as a state. While hostility to Israeli policies and to the fact of the establishment of this state, is not a sign of anti-Semitism, according to Markowitz, in reality, both often leads to it. All of this develops side by side with anti-Americanism: “the Europeans consider Israel because of its agreement with the United States is as powerful as America, for them, one is a continuation of the second and Vice versa.”

In addition Israel is an ally of the United States, although America has partnered with many other countries. Something here doesn’t add up. Markowitz explains, revealing the essence of the question. Israel is a Jewish state, and Europe behind them was a big problem with the Jewish people, a problem that was not solved, which still weighs heavily on the conscience of the Europeans. Therefore, as European anti-Americanism is woven from the same material as the anti-Semitism of the Old continent is as annoying Europeans, the problem of historical, cultural, political Association between the two countries give rise to the same Union anti-Americanism/anti-Semitism. The circle is closed. 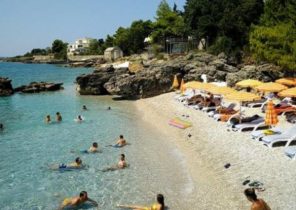 Bezviz with Albania: how to get and how much to relax