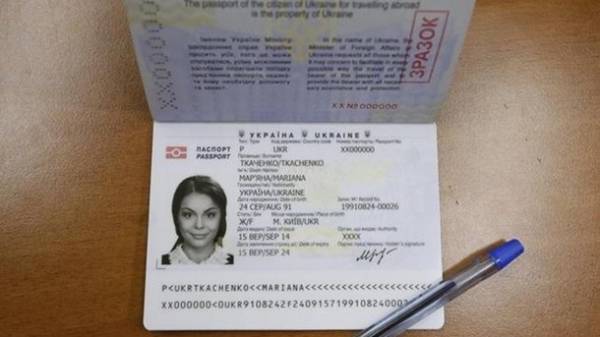 Bezviz has increased the demand for passports containing biometric data, as the holders of such documents can freely travel to Europe, while the owners of ordinary passports and then have to open the visa. Fuels rush in passport offices and the approaching summer holiday, writes the UBR.

By words a press-the Secretary of the state enterprise “Document” Vladimir Polishchuk, only on the day when the results were announced of voting for the European Parliament bezveze for Ukraine, on their website, instead of the standard 2-3 thousand people, went about 25 thousand Unaccustomed to such an influx of visitors “iron” simply lay down.

Now the site works, but for “technical reasons” in all centres of passport registration and issuance of passports is not conducted. At the enterprises suggest to try their luck at a different office — the offices of the state migratory service (SMS).

But there are online-all painted far forward. However, you can try to come and get in line directly in the offices of GMR (places are evenly distributed between the two queues).

In the GMS strongly recommends Ukrainians to turn to dubious intermediaries.

Difficulties with biometric passports can get people to seek the services of intermediaries that promise to bypass the queue to make all the documents within the required timeframe. But in the GMS strongly recommends Ukrainians to refer to this kind of dubious intermediaries. At best, this will end the paperwork in the same migration service, only at exorbitant prices, and the worst — you can stay without a passport and without money.

The cost of the services of intermediary companies varies from 1 thousand to 8 thousand UAH, depending on the urgency of resolving the issue. For comparison, at the national centre of service of citizens “Passport service” passport will cost 990 – 1245 UAH. In Znaph with the district administrations and migration service — another 400 UAH cheaper.

In this case, the bait scammers can get people who need to get passport urgently and they are ready to pay any money. But the mediators may ask for an amount comparable to the state price tag, playing on the reluctance of the client to stand in queues.

In the end, scammers can either slip the man a fake passport, or just get lost with his money.

About the scams and know in the SE “Document”. Thus in Department noted that the consequences of cooperation with them for the Ukrainians may be more serious than just the risk to remain without money. “They use the services of dishonest officials and at least and lead you to the desired office in the office of the migration service, but the wait is still have. There have been cases, for example, when fraudsters used personal details of clients and took on their names in the credits. Therefore, use of such services is strongly discouraged,” warns Polishchuk.

Warn against using the services of brokers and lawyers, while noting that many companies exist for quite some time. But with the hype surrounding biometric passports, their activity may increase.

“It has always been companies or individuals that promised money quickly arrange a document and would disappear with the money. Now an obvious boom in biometric passports and the queue stimulate speculators,” — said the managing partner of legal consulting company “De jure” Gregory Tripulsky.