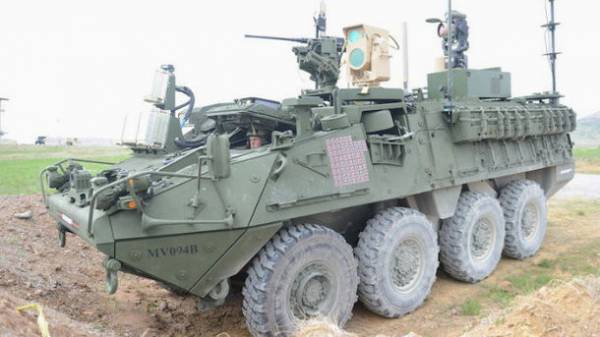 The US army conducted field tests of armored fighting vehicle MEHEL 2.0 (Mobile Expeditionary High Energy Laser, mobile, expeditionary high energy laser), made on the basis of the Stryker. As reported by N+1 citing Defense Aerospace, the test machine was carried out in conditions close to combat, on the ground of “Thompson hill” in Oklahoma. It was used to defeat a variety of unmanned aerial vehicles, including commercial quadcopters.

The American military believe that laser weapons will effectively fight certain types of targets, primarily with unmanned aerial vehicles, mortar shells and projectiles as well as light aircraft and helicopters of the enemy. In addition, combat lasers will help the military to quickly destroy detected mines and improvised explosive devices. Such a weapon has become particularly relevant, given that the militants in Iraq and Syria were more likely to use commercial drones.

War machine MEHEL 2.0 is being developed as part of systems of on-site defense. She will have to fight with drones. The machine is made on the basis of the Stryker armored car and equipped with a military laser with a capacity of five kilowatts. In addition to the laser armored vehicle equipped with systems of detection and identification of small UAVs. In addition to combat drones MEHEL 2.0 can be used for remote detonation of improvised explosive devices.

Previously the American company Lockheed Martin announced the successful testing of a new combat laser, whose power is 60 kW. During the tests, the measured power of the laser beam is a new installation made up of 58 kilowatts. Laser system works on the principle of spectral combining of fiber lasers. This weapon has multiple laser emitters, the rays from which are transmitted through the optical fiber in a device of combination.