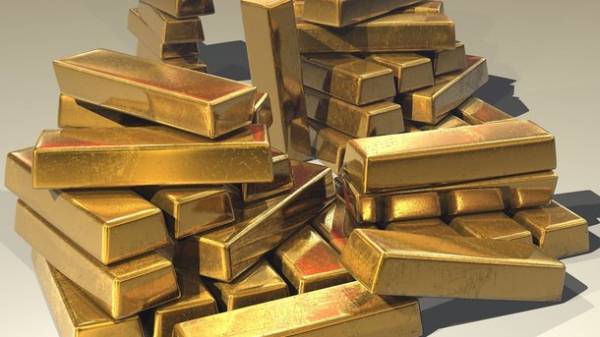 The banking of gold in Ukraine, a new chance. The boundary increase the amount of cash payments more than 10 times, returned the interest of Ukrainians to buy gold bars in banks. Until recently, allowed 12 thousand UAH it was possible to buy just one-desyatiraundovy bars. Now available steel ingots 50-100 grams, writes UBR.

Two weeks before, the NBU has allowed cash transactions to UAH 150 thousand, the main banks-operators recorded a growth of citizens who were interested in the new conditions and the actual purchases.

“Retail customers have already gone to the Bank. The week asked about 20 people. To increase the amount of the settlement was 2-3 people”, – said the Director of the Department of the banknote printing banking Express Bank Andrei Lviv.

As noted by Andrew lions, ingots 100 g before the crisis and are now most popular in retail. Therefore operators of the market of precious metals expect that retail customers will return to the banks thanks to the new relief measures. “We have always said that gold is necessary to allow the sale of at least 100 g in one hand, to this segment did not go to the black market,” explained lions.

According to the expectations of the banker, the black market will lose about 30 – 50% of customers, but for a few months momentum with metal in banks will increase by 2 – 3 times. Similar dynamics was recorded in the second half of 2016, when the national Bank increased the limit of cash payments on currency values from 6 th to 12 thousand UAH. The metal volume of operations per Bank has increased from 1 kg of gold per month to 2 – 3 kg. “Now through the Bank sold an average of 5.7 kg of gold and 10-15 kg of silver. We expect that demand will increase at least in 2 times”, – said Irina Pavlenko.

Banks are already preparing to accept clients. It is expected that many financial institutions will return to this market. Today actively engaged in trade, taking and selling gold and silver 5 banks, even as many sell bullion only through cash. Come back, those who have a license for working with metals, but at one time “launched” this segment because of constraints and because I didn’t want to work with selling through current accounts.

Using the accounts you could sell for 100 g a week, but the procedure was time consuming, unprofitable and costly for banks and customers. Now 100 grams can be sold through cash in 5 minutes instead of spending 45-60 mins., connecting at least three units of the Bank.

“Sell through cash easily. All the banks that had the license, it rapidly cycles. Many of the agencies who offered bullion to 10 g., a gun the day after the NBU approval, a proposal ingots 50 and 100,” – said the head of operations with precious metals apex Bank Vladimir pischany.

However, significant market growth still will not. The main buyers of gold the banks have always been jewelry companies and large investors. But conditions for them have not changed. Legal persons can only buy gold through accounts, which you can still release only 100 grams a week. Therefore, the entire large wholesale, the consumer will continue to support the black market.

“While the opt will remain in the shadows. If allowed through a bill to sell at least 1 kg of gold, jewelry companies would go back to the banks. Then it would make sense to increase delivery of metal,” – said Andrey Lvov.

In pre-crisis years, banks have increased their import of gold to 25 tonnes. But for 2008 delivery fell to 5.5 tonnes, and by 2016 – up to 0.5 – 1 ton. In recent years, turnover official market of precious metals is estimated at 1 ton per year. It and plan to increase to 3-4 tons due to the partial easing of cash transactions.

“3 – 4 tons per year will be a good indicator. We all have yields in local currency and its exchange rate has fallen 3 times, same is reduced the metal market. Before the crisis, the retail average “weighed” 10 to 11 tons,” – said Andrey Lvov.

To maintain such momentum banks still enough unsold stocks of ingots and delivered to the people of the metal, which actively bought up in the years of economic growth. Until you have removed all the restrictions of the NBU, to bring from abroad will be quite a bit. After all, today 80% of the official market is “just in time”, by selling what is brought to the banks. “20% may be the delivery of the values of those bars that should be present in retail,” added lions.

During the crisis, the structure of operations with Bank metals has changed, as due to the fall in sales volumes, and due to the activation of citizens to get rid of gold assets. Previously the implementation was 97% vs. 3% for transactions of repurchase. Today, at the redemption account for up to 30% of the operations with metals and transactions foreclosures continue to prevail over the purchase.

“If after the Bank sold an average of 5 – 7 kg of gold, the volume of banking metals purchase in the cashier of the Bank up to 10 kg of gold”, – stated Iryna Pavlenko.

Metal has always been regarded by citizens as an investment for a “rainy” day. For someone in crisis, this “black” day has come. But many, with a decent volume of investments in gold, began to pass after the fall of the value of the property. “Previously, for 1 kg of gold you could buy a 1-bedroom apartment. Today this pounds you can buy a 2-bedroom and even with the repair,” told Vladimir pischany.

The crisis has forced banks to change their attitude towards working with metals. First, they have ceased to deny redemption of gold bullion, purchased in other banks. Today, only one financial institution with the state capital buying up bullion to sell in their offices.

Also as banks closer together the courses of sale and purchase of Bank metals. The most active agencies, particularly in the capital, the difference is 27 to 30 UAH. And as an added Vladimir pischany, mainly in Kiev and is buying bullion from citizens from all regions. “The difference in prices in the capital and in regions up to 150 UAH. at the gram. And for the ingot 20 grams, a trip to Kiev for delivery of the metal is quite justified”, – said Vladimir pischany.

Lose in value on the redemption bullion only citizens who rent the metal in substandard condition – scratched or damaged packaging/no packaging. The amount of monetary losses depends on the mass of the ingot. The smaller it is, the more the discount. So 100 bullion banks bid for 1-2% less, and 1 – 2 mg purchase cheaper by 10%. On average, damaged goods is 30% of the redeemed people of volume.